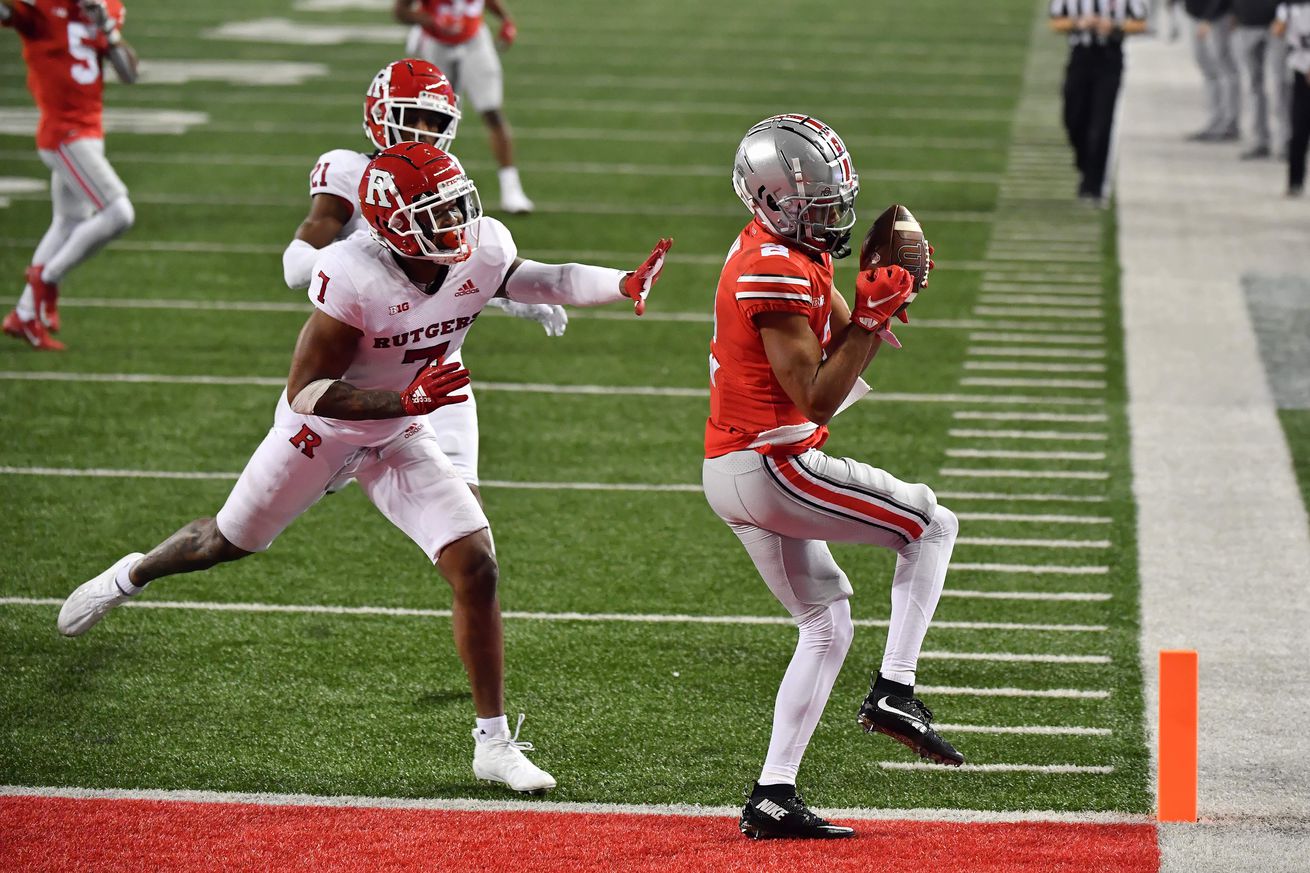 Once again, my apologies for no Big Ten preview this week. It was a very hectic week at work and, well, that whole election thing was slightly distracting. With no Purdue game I kind of forgot about it until this afternoon when the games had already started. We can still recap the week, however.

I am afraid that Indiana is legitimately good. Sure, Penn State is probably bad and Michigan is shakier than jello, but once again, the Hoosiers are winning the games they should, which is rare for their program’s history. Now the Bucket game could possibly be the game of the year in the Big Ten, as Indiana very well could be 6-1 going into it:

Oct. 24, 1987 was a wet and blustery day in Monroe County. Or, in other words, postcard Big Ten weather. Late in the third quarter, IU had the wind at its back as it engineered a 14-play, 65-yard scoring drive that ate eight minutes off the clock. Then, when the period ended and the field flipped, something incredible happened. The wind changed directions, whooshing right back into the faces of the Wolverines over the final 15 minutes as IU held on for the four-point victory.

Did the Hoosiers receive a similar kind of divine assistance on Saturday? No.

Michigan is now 1-2 and has looked as if the forward pass is a foreign concept to them:

Caught flat-footed and tentative too often, Michigan’s defense gave up big plays which led to Indiana QB Michael Penix Jr. throwing for 350 yards and 3 TDs. More often than not the Hoosiers were able to do what they wanted, accumulating 28 first downs throughout the day. Michigan mixed up zone coverage and man coverage today but the gameplan didn’t work and Michigan got dashed and gashed.

Last season the Wildcats only won three games. Now they are 3-0 heading to Purdue, where the winner will have almost total control in the Big Ten West:

Peyton Ramsey was far from perfect, but turned things around enough in the second half to secure the win, finishing with 169 yards and two touchdowns through the air. With Isaiah Bowser sidelined due to injury, Drake Anderson carried the rushing load by posting 89 yards on 18 carries, while the pass catchers demonstrated a team effort with seven different Wildcats finishing with at least one reception.

That loss where our beloved Huskers got into the red zone six times and came away with 13 points. The one where our best players spent significant time on the sideline for GOD KNOWS WHAT FUCKING REASON.

How about the Hawkeyes! They probably should be 3-0 if not for a wealth of self-inflicted wounds, but they firmly took care of business against the Spartans:

After two painstaking weeks of more of the same, the Iowa Hawkeyes (1-2) emerged victorious over the Michigan State Spartans (1-2), 49-7.

It would be cliche to write it wasn’t always easy but frankly, that would be wrong. The Hawkeyes carved up the Spartan defense from the jump using a diversified array of playcalling to go up 7-0, 14-0, 21-0.

The Spartans delivered their second thud of the season after a stunning upset at Michigan:

Remember last week? That was fun wasn’t it? This week, not so much.

Iowa jumped all over Michigan State early and never looked back on the way to an easy 49-7 victory.

The Hawkeyes carved up the MSU defense in the early going, with touchdowns on each of their first two possessions. This just one week after MSU held Michigan in check for the bulk of the game.

Taulia Tagovailoa is on a heater right now, just rending Big Ten defenses as the Terrapins moved to 3-40-1 all-time against the Nittany Lions:

In a complete turnaround from their 59-point loss to Penn State last season, the Terps trounced the Nittany Lions in the 35-19 victory. The team has never scored that many points in the matchup, with the previous high as 30 back in 1982.

“To come over here at their place, it’s a blessing,” Tagovailoa said. “Our team looks forward to the opportunities, we like to compete, and…it’s just a blessing. Hopefully, we can continue to build off of this like we built off of Minnesota.”

Penn State is now 0-3 after starting their season in the top 10:

Let’s be clear from the start: Maryland is not a good team. This is not me trying to troll. They played incredibly well today, and credit to them for what has to be their most satisfying victory in some time. But the Terrapins are a mediocre team, and yet, Penn State got absolutely worked by them. The Nittany Lions — from James Franklin as the head coach to Sean Clifford as the quarterback — got absolutely out-coached and outplayed against a team that it should never happen against.

The Golden Gophers got their boat going in the right direction as Mohamed Ibrahim ran for 224 yards and a Bundy:

Look Illinois is very bad. That shouldn’t discount Mo Ibrahim doing work. Led by an offensive line that ran outside zone to near perfection all game, Ibrahim put up 224 yards on the ground, 31 yards in receiving and four touchdowns. Ibrahim is the first Big Ten running back to have back to back 200+ yard games since Larry Johnson. He also tied the school record for 200+ yard games. Not bad for three games into the season.

A week after looking somewhat decent against Purdue the Illini got absolutely blasted:

Illinois (0-3) was without 15 players due to injuries, positive Covid-19 tests and contact tracing, and Minnesota (1-2) exploited a depleted Illini team to net their first win of the year.

“Last week we lost but we didn’t lose like this,” Smith said. “We’re better than this.”

PJ Fleck’s squad out-gained Illinois 556-287 and that yardage discrepancy showed on the scoreboard.

The Buckeyes might be the only good team in the Big Ten, but at least they are the most consistent. They continue to take care of business even against a feisty Scarlet Knights team:

After a big time showdown with Penn State last weekend — which, in hindsight, doesn’t look all that big anymore — Ohio State got a bit of an easier draw this time around, as the Rutgers Scarlet Knights came to town for an under-the-lights battle in the Horseshoe. Greg Schiano made his return to Ohio Stadium with an improved Rutgers squad, but would it be enough to challenge Ryan Day and the Buckeyes on Saturday night?

The short answer is no.

The Scarlet Knights continue to show they are much, much better than last year:

For the first time ever, the Rutgers faithful can feel good after a trip to Columbus. The Scarlet Knights suffered a 49-27 loss on Saturday night but they pulled out all the stops in this one.

Ohio State outscored Rutgers 28-0 in the second quarter and led 35-3 at halftime. Justin Fields continued his Heisman campaign by going 24-28 for 314 yards and five touchdowns. He is still without an interception this season.

Memphis 34, South Florida 33 – The Tigers scored two late touchdowns to get a big come from behind victory.