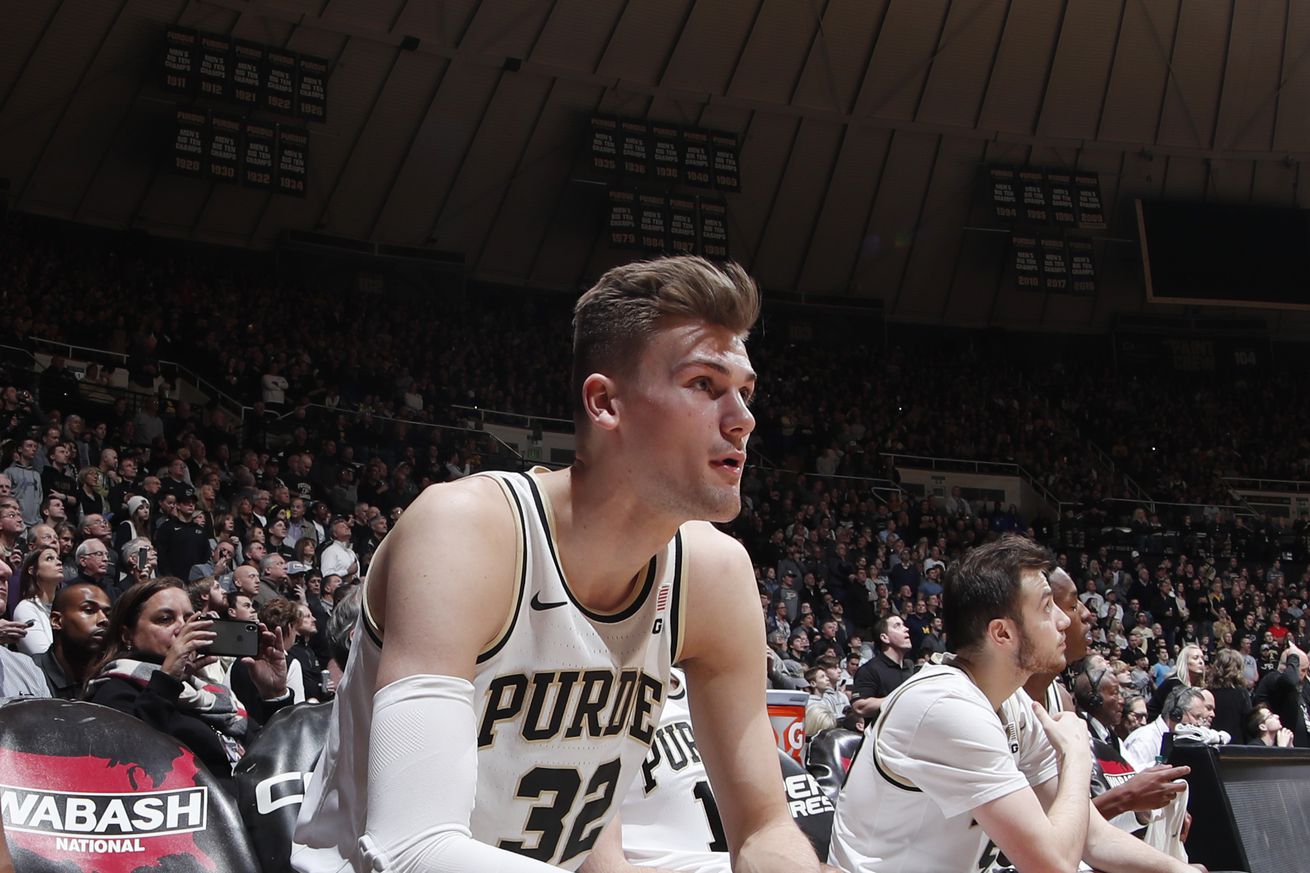 Since the big Dutchman will not get a senior day in Mackey Arena let’s give him one.

I think that’s one of the things that bothers me the most about this situation. When a guy chooses Purdue, he becomes part of our family forever. Yes, even Ronnie Johnson. When he stays all four years, we see him grow up. The difference between a wide-eyed freshman in some early November home opener against a far flung low-major and the battle-hardened senior in a late season Big Ten game is stark. Sometimes it all ends in disappointment like it did this year with an overtime loss to Rutgers. Other times, like for Jon McKeeman and Spike Albrecht in 2016-17, it ends with confetti falling from the rafters as a Big Ten Championship is clinched.

The point is that Senior Day is a thank you. It is a time to laud these young men in appreciate for four years of hard work, toil, and memories. It is a time to send them off into the Big Ten Tournament and NCAA Tournament with one last boost of Mackey Magic.

Haarms won’t get a senior day. After three years and a ton of memories we won’t get to fete him and say thank you as one big group. So let’s say thank you right here. Haarms was beloved in West Lafayette for his energy and enthusiasm. He helped win a Big Ten championship in 2018-19 and even though he was redshirting in 2016-17 he played a role in practice against Isaac Haas and Caleb Swanigan. He helped Purdue reach three consecutive Sweet 16s and came within less than a second of getting us to the promised land of a Final Four (missing a block on that play by a split second).

Here is what the staff had to say about our favorite memories:

I have to go with the tip in at IU last year to win us the game.

Make that in a row for @BoilerBall and eight of the last nine in the rivalry!

It was a drama-filled ending at Indiana, and Matt Haarms’ tip-in was the deciding bucket: pic.twitter.com/j0Ajr2xLIN

Since Jace didn’t elaborate further I will step back in. Haarms never lost to Indiana in the four seasons he was part of the team. I hope wherever he ends up he gets to torment them some more. Watch this clip and bask in the exquisite sound of horror as the IU crowd is silenced and the Purdue fans in attendance erupt. Also enjoy the fans on the sidelines whining for an over the back foul (despite him not touching the player in front of him). Everything about the clip is delicious. This was the “f*** you Matt Haarms” game. They had ridden and derided him for two hours over the course of a brutally ugly contest. He only had 6 points, 4 rebounds, and an assist in the game but no one played well. Carsen Edwards could hit nothing, but Haarms shut them the hell up with this play and it was glorious.

It has to be the IU tip-in, right? Everyone is going to say that right? Am I crazy? Is there some other hipster take that Casey or Holmes have instead of the moment our Dutch Master stuck the knife into IU’s back as time ran out? It was art It’s Jan Steen’s “Marriage of Tobias and Sarah” but Haarms is the angel, IU fans as the dragon, and Romeo Langford and Rob Phinisee on their knees weeping.

There is only one obvious choice, for all the games and minutes and hair flips, there is just one play that Haarms so irrevocably shaped things on the floor.

But that’s not the memory that sticks. Or it is, but in the way you remember the first line of a poem. It’s familiar and important, but only because you know it’s going to lead to the gut punch, the last line.

For three straight years, I drove from Lafayette to Bloomington. I ate darn good soup and walked the halls of Assembly Hall. I watched the blarge and never tasted defeat. But it was this third game, the Haarms tip-in game, that Haarms cemented himself to me, not as a player, but a Boilermaker. This was the game where the entire crowd, punch-drunk and young and hateful, spewed off those words ‘Fuck you, Matt Haarms.’

I wrote after the game, from the media parking lot, in my car because I felt something at the time that couldn’t wait the two hours north.

”There’s something vulgar about that phrase.

It’s important. Read it. Don’t edit it out. Fuck you, Matt Haarms.

The vulgarity isn’t the cursing as much as the singularity, the unity of hate-filled voices raging over and over again directed at one kid. Decades of tough contested games, of hard-fought victories, turned up and cheapened into the antithesis of school spirit and clever student sections.”

So what do I remember most about Matt Haarms? It was after the game, in the press room at Assembly Hall, a room of sports writers and beat writers and media heads who have been around the block, in what is usually a pretty quiet time as writers took notes and made stories and pictures were edited, and no one could quite believe what had gone on.

”He had to close off his messages on social media from death threats.”

There was a smirk to Haarms when he got to the stage, when he addressed the questions, the fuck you’s, the tip-in. It was nothing to him, the hate, the vitriol, it was a rivalry and fans were fans, and it felt so much like yes, this kid, this 7’3” skinny giant from the Netherlands was walking kevlar, was a Boilermaker. I remember feeling proud and at one, the kind of pride you gather behind enemy lines. Matt Haarms might not make another basket for Purdue basketball and he had cemented himself as an all-time Boiler in that moment, not the tip-in, but in everything after.

So that was the first line of the poem. A really good line. The one I thought I’d take away from his career. Turns out the last line hurts quite a bit.

Instead, what I’ll do is include my favorite Matt Haarms gif.

Haarms has done more damage to the Indiana Hoosiers than the Scott brothers. Purdue has enjoyed four years of complete dominance in this rivalry, including four straight victories in Assembly Hall (the absolute best part of it). Jace mentioned the 2019 win above, but this year he was a large reason Purdue was able to take a huge dump right on top of Bob Knight Day. Purdue started to struggle in the second half, but Carsen summed it up best:

With Indiana making a second half comeback and Purdue’s lead down to 56-50 with 8 minutes left he shut them the hell up yet again. He rolled to the basket for a layup and was fouled. He hit the free throw after the media timeout, got the rebound on the next defensive possession, then hit a jumper to make it 61-50. In 53 seconds he got Purdue out of danger and Indiana never got within single digits again.

Haarms will be remember for his energy and exuberance. He was a great teammate, always involved in the game even as a cheerleader on the bench. His sneer and sheer joy at quieting the crowd in Assembly Hall on multiple occasions makes him a Purdue legend though.