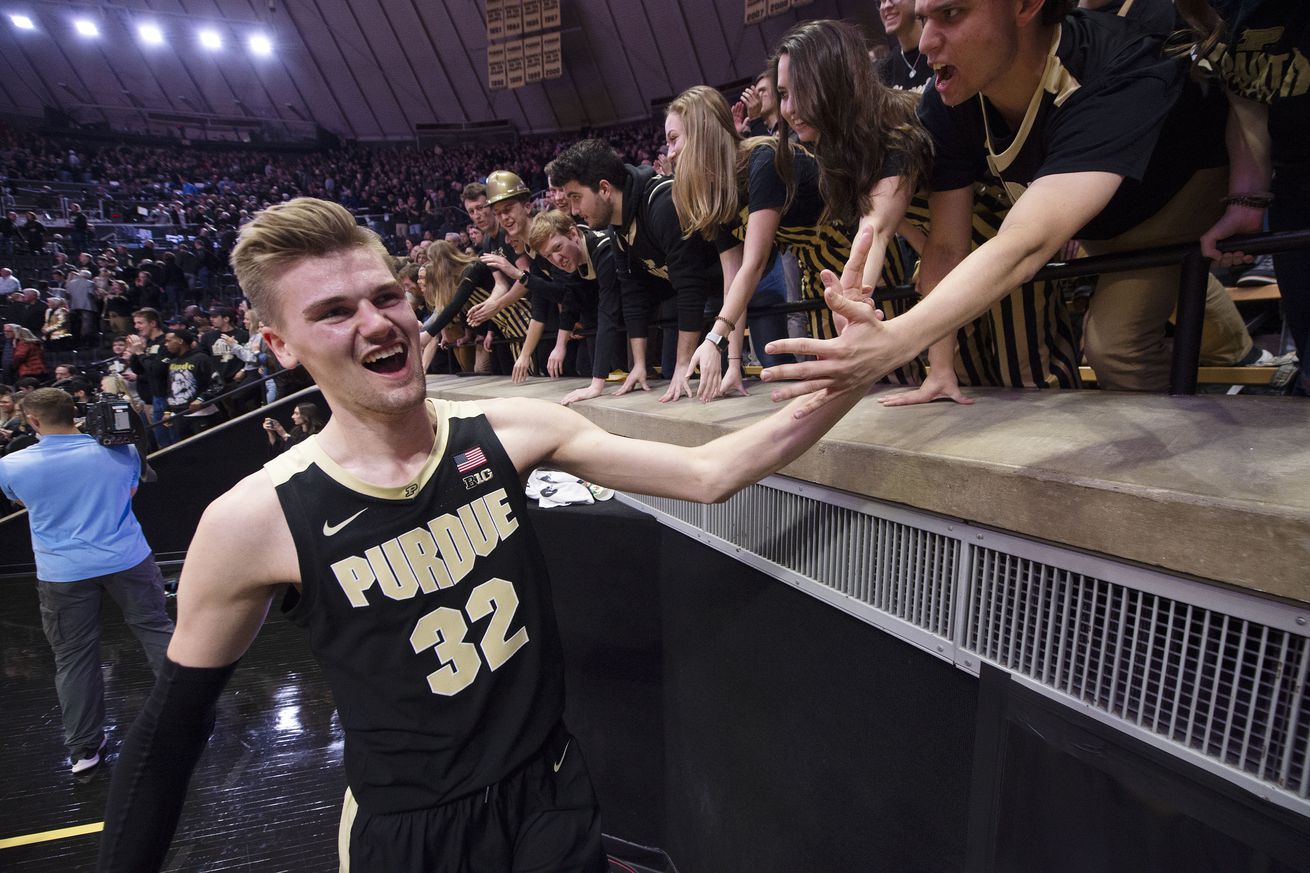 It’s been four seasons, countless hair flips, and a lot of wins, but they’ll be no senior year at Purdue for Center Matt Haarms.

In a world mostly shut down, and sports idle everywhere, little ripples in the pond are bound to look like tsunamis. But in Big Ten country, the news breaking this afternoon is a boulder tossed in a bath tub.

Purdue’s senior Center to be, Matt Haarms, announced his intention to enter the transfer portal and transfer away for his final collegiate season. The news is scarce, but it seems to have come as a shock to everyone in and around the department.

The 7’3” shot blocker has been something of a media darling, a March hair sensation, and fourth on Purdue’s all-time block list.

So, when the big news breaks, we get around the virtual table and record our immediate reactions:

Andrew Ledman(somethingsomethingjumboheroes): I’m honestly shocked. When it came through in our group chat(thanks groupme! sponsors accepted!) I thought someone was trying to be funny. It just made no sense to me initially. Then I took a step back and in some ways it makes perfect sense. With the incredible rise of Trevion Williams and the diminution (I looked this up, it is a word) of Haarms’ playing time and production he was the perfect candidate for a transfer. I suppose I just didn’t want to think about it because I love the guy’s energy and I love the attitude he brings to the team and to the floor. I’m really gonna miss him.

As for how this impacts the team next year I think it’s too early to say. It certainly puts a lot of pressure on Trevion Williams to continue to grow and improve on both ends of the floor. It puts additional pressure on Emmanuel Dowuona to grow into his role as the backup center. Next season will see the addition of Zach Edey who is 7’3 thus keeping intact the rule of Purdue having to have a seven footer on the roster at all times, however it’s widely believed that Edey will redshirt as he is still raw. From a purely basketball standpoint I think this puts more pressure on Purdue’s shooters to be much better last year. Teams will likely attempt to sag onto Williams and force Purdue to beat them from deep. With Morton, Ivey, Gillis, and Newman all coming in next year let’s hope the shooting picks up.

Kyle “Hold my beer” Holderfield: I cannot say I am that surprised. His minutes dwindled more and more as the season progressed. Does it hurt? Absolutely. You are talking about a guy who has played a lot of meaningful minutes for Purdue, losing a veteran always hurts. But is he replaceable? I would say so. His offensive game never really matured like we all thought it might, and quite frankly, he got progressively worse on defense each year. It has been quite a few years since we lost a transfer and quite frankly we were due.

For next years squad, it means you lose a vet. But, I think Trevion was going to eat up 25 to 30 minutes at Cener anyway. We will need Dow to come in and be the athlete he is. He will not give us much on offense, but if you look at his build, he is meant to protect the rim, run up and down the court and rebound, everything we need in a back up center. Outside of Trevion, this team appears to be more guard and wing dominant, just based on how we have recruited.

Does it suck a bit? Sure. But does it open some doors with higher ceilings. Absolutely.

Andrew Holmes: I have no idea. That’s what Gmail recommended as a response to Casey’s email and it feels apt. If this isn’t indicative of a bigger locker room issue than I think we’ll adjust and be fine. Tre keeps improving and hopefully can manage the workload of being on the floor 30 minutes for a lot of the season. We have two other 5s and could add another, but none have played against real Big Ten competition. Edey is the player this hurts the most, Haarms benefited from Haas’ experience and Haas always talked about how much Hammons taught him about being a 7-footer in college. There are so few people in the world who are as big as those guys and this ruins our “big brother” program for guys over 7-feet tall.

T-Mill: I log off the internet for half an hour and all hell breaks loose.

So the Purdue career of Matt Haarms appears to be over. The Dutch big man and fan favorite has elected to enter the transfer portal for his final year of eligibility. He will have to be a graduate transfer in order to play immediately somewhere else. This is because back in 2017-18 he had an issue in high school that started his eligibility clock in the fall of 2017, so he came to Purdue in the spring and “redshirted” while practicing against Isaac Haas and Caleb Swanigan. He gave us 763 points, 445 rebounds, and 210 blocked shots over three seasons and will forever be loathed in Bloomington for his tip-in to win the game there in 2018-19.

To me, this is just shocking. Haarms saw his number drop off quite a bit, as outlined in the homework piece I did on him. I attributed it more to a midseason concussion and hip flexor than anything else, but I never once thought he would be transferring. This is a guy fans mostly adored and he always seemed to adore Purdue in return.

Now he is gone.

Purdue now has a rotation of Williams, Dowuona, and Edey at the five, so one very experienced junior, a redshirt sophomore who has played sparingly, and a true freshman. Dowuona or Edey appear to be the big winners here. One is going to get a lot more playing time than we thought.

This also affects the four, where Haarms occasionally played with some success when Williams was on the floor. This competition is now wide open, with Aaron Wheeler and Mason Gillis operating with no safety net. Short of Williams playing some four with Edey and Dowuona at the five this position relies so much on Wheeler and Gillis unless Purdue goes four out, one in offensively.

Overall, this is just shocking. I am not sure what to think.

Casey Bartley: Check out our twitter if you want a more what it means for the team on the court (in short = lower floor, same ceiling) because at the moment this is still just shocking. Matt Haarms had turned into the face of the program, for good and bad. His energy. The fists. The hair. The blocks. He was a lot of fun when it was going well, and it’s sad that his final season as a Boilermaker was such a disappointing one for him personally and for the team.

Hopefully this decision is one that comes to be the best for both sides. Haarms was probably not as good as he should have been, but he’s also too good to be a back up center. He’ll always be a Boilermaker.