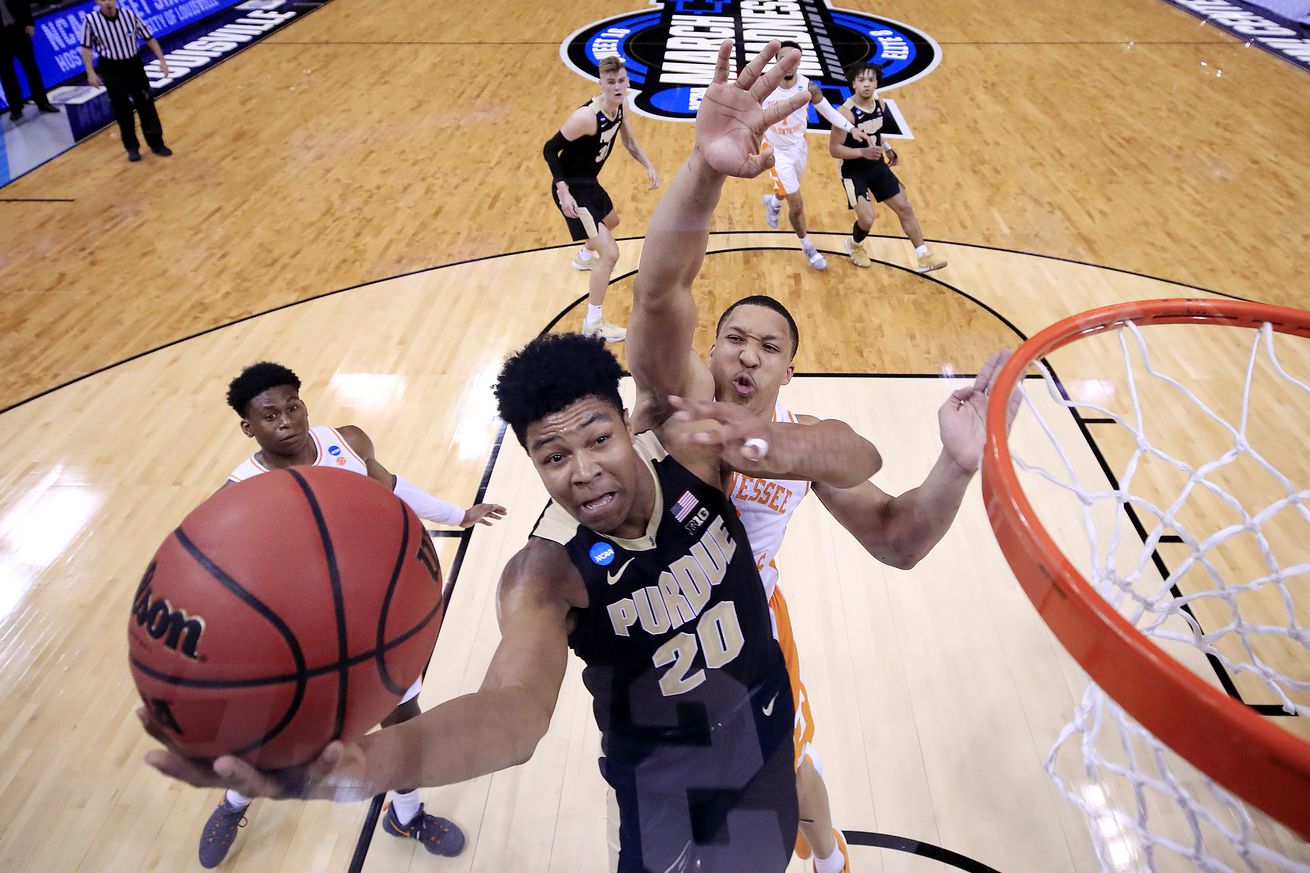 One of the last major things I was did at my old website, Off the Tracks, was a “Best wins of the Tiller ERA” since his final season in 2008 coincided with the last year I was at the old blogger site. Doing something similar for football right now would be depressing because there just haven’t been very many wins since 2008.

Basketball is different, however.

Painter just completed his 15th season at Purdue. With three Big Ten championships, five Sweet 16s, and an Elite Eight to his credit he has been on quite a run. But what are his best wins?

We might as well put them to a vote. Since there is plenty of down time at the moment we can then take a deeper look at each game individually. Here are the candidates:

November 29, 2006 – Purdue 61, #25 Virginia 59 – Technically this was Painter’s second win over a ranked team at Purdue, as his 9-19 first season squad upset #22 Michigan. Terrance Crump’s game-winning basket was critically important, however. It gave Purdue a much needed marqueee non-conference win and set the stage for the Boilers’ return to the NCAA Tournament that season. Purdue’s 2007 appearance would be just the second sicne the 2000 Elite Eight run, but since then Purdue has been 11 times in 14 seasons.

March 16, 2007 – Purdue 72, Arizona 63 – Not only did Purdue return to the NCAA Tournament, it did some damage once it was there. The most memorable moment from this game was Chris Kramer hitting a 15-footer from his knees as the shot clock expired. Purdue eliminated Arizona, then gave defending champion (and eventual tournament winner) Florida everything it could handle in round 2.

January 26, 2008 – Purdue 60, #11 Wisconsin 56 – One of the only times that students have ever rushed the court at Mackey Arena. Purdue got a game-clinching block from Robbie Hummel and its first win over a top 15 team since beating No. 2 Duke in the 2003 Great Alaska Shootout. This game announced that Purdue was back and ready to compete for more than just an NCAA bid.

February 9, 2008 – #24 Purdue 72, #8 Wisconsin 67 – This was an odd game because it was back when the Big Ten Network was not widely available in its first season. A lot of people didn’t see it. I remember tracking it on ESPN’s game tracker. This week was the first time in four years Purdue was a top 25 team and the second win over the Badgers made us think a surprise Big Ten title with the Baby Boilers was possible. Ultimately, Wisconsin would win the Big Ten at 16-2, losing twice to Purdue, while Purdue became the first team since Big Ten expansion to lose three games or less and NOT win at least a share of the conference crown. The only other team to do that? Purdue in 2018.

December 20, 2008 – #13 Purdue 76, #22 Davidson 58 – I am putting this game on here for one reason: for 40 minutes Keaton Grant and Chris Kramer put one of the greatest shooters the game of basketball has ever seen in a box and didn’t let him do anything. Some Western Conference team should had signed Kramer about 5 years ago explicitly as a Stephen Curry stopper because of this game. Defense definitely visited Bankers Life Fieldhouse that day.

March 21, 2009 – Purdue 76, Washington 74 – Purdue wins a de facto road game in Portland to reach the Sweet 16 for the first time in nine years. This was a fantastic back-and-forth game and Purdue sealed it with three huge defensive stops in the last 90 seconds.

January 1, 2010 – #4 Purdue 77, #6 West Virginia 62 – Roughly a year earlier in a similar atmosphere Duke walked into Mackey Arena and smacked around a good Purdue team that wasn’t quite ready for the big time. This time it was different. Purdue dominated an eventual Final Four team and Mackey was electric for 40 minutes.

January 19, 2010 – #13 Purdue 84, Illinois 78 – One of the most underrated games of Painter’s entire tenure. The Boilers were coming off of three straight losses after the 13-0 start and one was an awful game at Northwestern. Painter was so frustrated that he played little used John Hart. Hart hadn’t played a single minute in four weeks and wasn’t even int he score book for some reason, giving the Illini two free throws for a technical foul. Hart had 14 points in 18 minutes after having just eight points total in the seven games he had played in to that point. Purdue has one less Big Ten title without Hart because of this game.

February 9, 2010 – #6 Purdue 76, #10 Michigan State 64 – This ended up being a huge road win by double figures over a top 10 team. Suddenly anything was possible when we’re walking into East Lansing and smacking around the Spartans.

February 17, 2010 – #4 Purdue 60, #9 Ohio State 57 – At the time I was convinced Purdue was going to the Final Four. It avenged the collapse at home against Evan Turner and the Buckeyes by getting another big road win. Between this and the win over Michigan State I was thinking, “We may not lose again this season”.

February 24, 2010 – #3 Purdue 59, Minnesota 58 – THAT game. Purdue was absolutely cruising on the road against a desperate-to-make-the-tourney Minnesota team. not only was Purdue 23-3 at the time, it was looking unstoppable, specifically in opening up an early 26-14 lead. You know what happened next. Still, this is a memorable one in the “sheer guts” category. Hummel’s injury led to an 18-0 Minnesota run (and it was Hart that finally broke it), but Purdue recovered enough to win on Keaton Grant’s late jumper.

February 25, 2012 – Purdue 75, #11 Michigan 61 – Hummel’s final season was up and down, but the Boilers went on the road in late February and delivered a convincing win that basically clinched an NCAA bid.

November 26, 2014 – Purdue 87, BYU 85 (OT) – The Boilers win the 5th place game in Maui on a late basket from AJ Hammons. After two straight losing seasons Purdue finally gets it together and shows it is ready to return to the tourney with a big neutral court win. Purdue pieced together a solid 21-13 season and got back to the NCAAs, likely saving Painter’s job in the process. This win propelled that.

February 28, 2017 – #16 Purdue 86, Indiana 75 – It wasn’t the best year for the Big Ten, but Purdue beats Indiana to clinch the Big Ten and have confetti rain down on their heads. a few nights later a loss by Wisconsin meant it would be an outright championship, the first since 1996, breaking a 21 year drought.

November 24, 2017 – #18 Purdue 89, #2 Arizona 64 – After two narrow losses in the Battle 4 Atlantis the Boilers vent their frustration agaisnt the team that had the eventual No. 1 overall NBA pick. Purdue was absolutely dominant in every phase and went on to win a school record 19 straight after this.

February 22, 2018 – #9 Purdue 93, Illinois 86 – This is the first time we saw Carsen Edwards go absolutely batshit nuts as he drops a 40-spot to give Purdue a win in Champaign. The win also clinched the first ever Delaney Dozen. giving Dakota Mathias, PJ Thompson, Vince Edwards, and Isaac Haas a win in every Big Ten arena.

January 11, 2019 – Purdue 84, Wisconsin 80 (OT) – In a season where Purdue would go on to win the Big Ten, this game was a turning point. It started an eight-game win streak where the Boilers went from “We have work to do to make the NCAAs” to “My goodness, we might win the Big Ten now!”

January 27, 2019 – Purdue 73, #6 Michigan State 63 – Mackey at its best: killing ranked teams. The Spartans were an eventual Final Four team, but they crumbled again in Mackey.

March 9, 2019 – #11 Purdue 70, Northwestern 57 – After coming up just short a year earlier Purdue clinches a surprising Big Ten title, Painter’s third. Of all the Purdue teams I have seen, this one mugh have been the most fun to watch and it was an extremely satisfying Big Ten title.

March 28, 2019 – Purdue 99, Tennessee 94 (OT) – Forever known as the Ryan Cline game. Purdue had a big lead, gave it up, then traded haymakers before pulling away in overtime. It took five years off my life after Purdue blew the lead, but we finally had a Sweet 16 breakthrough.

December 4, 2019 – Purdue 69, #5 Virginia 40 – It didn’t reverse what happened 9 months earlier, but it was cathartic to blow out the defending champs in Mackey.

So what do you think? Rank your top 10 in the comments and I will try to put it all together and do a series of posts on each game individually looking back at them. If you have a candidate not mentioned here feel free to list it in your rankings.