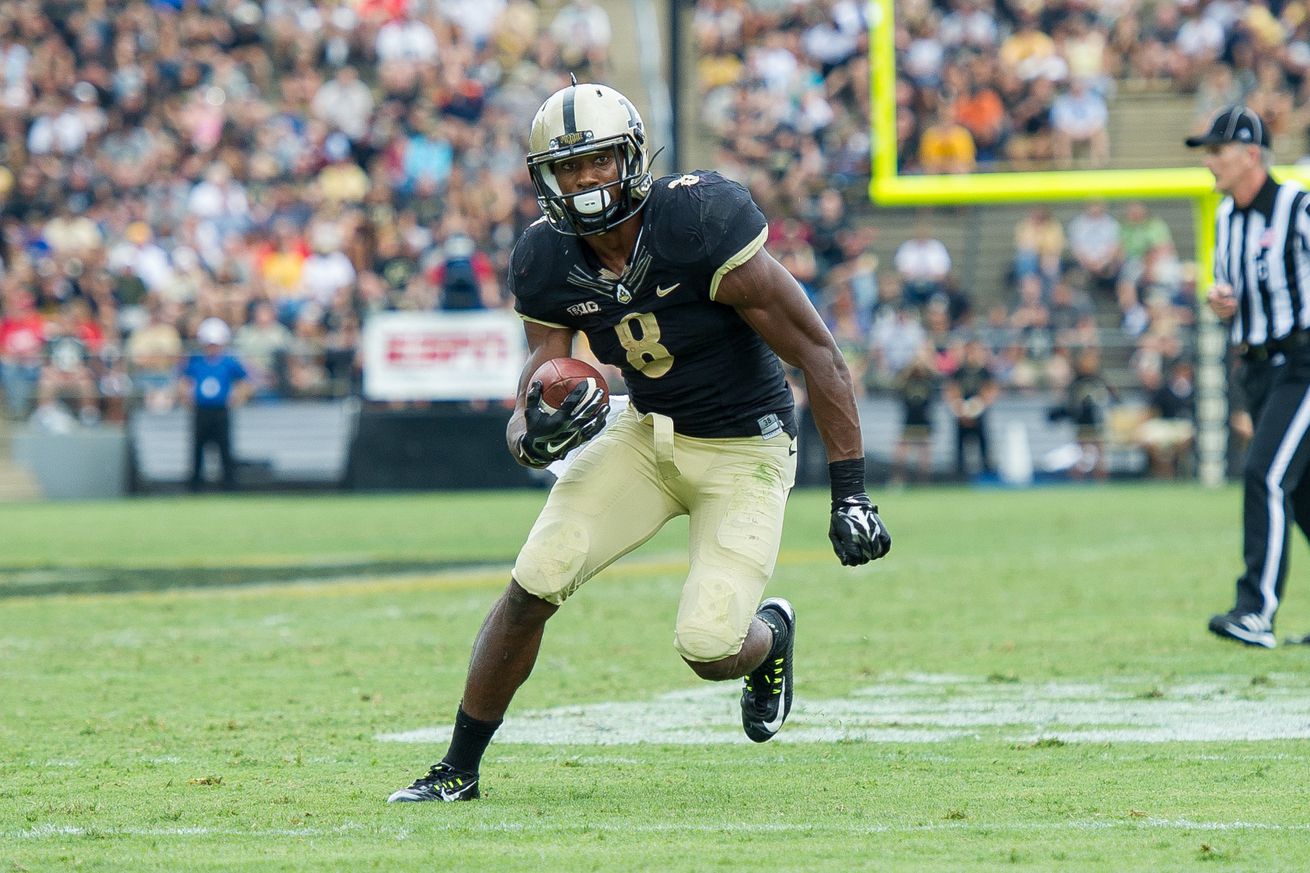 The former Boilermaker was rewarded for his breakout 2019 season with a reworked contract.

I’m assuming most days are good days for former Boilermaker track and football standout Raheem Mostert, but today has to be especially sweet for the veteran NFL running back.

The #49ers did not add new years to RB Raheem Mostert’s contract. With achievable incentives and a signing bonus he can almost double his salary of $2.875M this year, source said. Mostly, this is about the incentives. https://t.co/SBbZWcxBhE

Mostert entered the NFL as an undrafted free agent in 2015 after a frustrating Purdue career (at least I was frustrated by it) that saw one of the fastest players in the nation bounce around between wide receiver and running back. More often than not, he hung out on the sidelines for the Boilermakers, watching guys that work a 9-5 job today carry the ball and catch passes for Purdue.

Even while toiling away on the bench on offense, Raheem maintained his focus as a kick returner, setting a program record by averaging 33.5 yards a return as a freshman. He returned two kickoffs for touchdowns in his career, including a 99 and 100 yard effort.

In terms of his athletic career at Purdue, Mostert was better on the track than on the football field (due to coaching ineptitude). He took gold in the 60 and 200 meters at the 2014 Big Ten Indorr Track and Field Championships. He also qualified for the 2014 Outdoor Track and Field Championships in the 100 meters, 200 meters, and as member of the 4×100-meter relay team.

After going undrafted in 2015, Mostert lived the life of an NFL vagabond for two seasons. He originally signed with the Eagles, but was cut at the end of training camp despite putting up solid numbers in the preseason. The Eagles tried to stash him on the practice squad, but the Dolphins liked what they saw and scooped him up.

He made an appearance as a kick returner for the Dolphins, returning two kick-offs for a total of 57 yards in week 2 before being released by the Dolphins, who, like the Eagles, hoped to stash him on their practice squad.

He returned 12 kicks for 309 yards in the final 3 games of the 2015 season for the Browns, and signed a one year tender for the 2016 season. He was subsequently waived in September for roster space.

Four days after being released by the Bears, Raheem was added to the 49ers practice squad and was elevated to the 53 man roster for the final game of the season.

2017 was a crucial season for the former Purdue track star, even though it ended after 11 games with a trip to the injured reserve list. He contributed 6 carries for 30 yards and 83 return yards on the season, but his true utility, the 49ers believed, wasn’t as a kick returner or a running back, but as a gunner on special teams. His work on kick coverage teams cemented his place on the squad in 2018.

In what must have been an incredible relief, Mostert started the 2018 season for the same team he ended the season with in 2017. The 49ers continued to utilized him a special teams ace, but found ways to work him into the gameplan on offense. Over 9 games he carried the ball 34 times for 261 yards (7.7 YPC) and a touchdown. He also hauled in 6 receptions for 25 yards (23 of those yards coming on one play).

It appeared he was going to find regular work in the 49ers backfield, but he shattered his forearm at the end of the same Oakland game he scored his first NFL touchdown in, sending him back to the injured reserve list. The 49ers signed him to a 3 year extension in the off-season based on his sterling work on special teams and new found potential as a running back.

While the regular season proved Mostert was, at worst, a useful change of pace back in a running rotation, the 2019 post season showed his star potential. As the lead back for the 49ers 2019 playoff run, Mostert was one of the focal points of their attack, carrying the ball 53 times for 336 yards and 5 touchdowns in San Francisco’s run to the Super Bowl.

His 29 carry, 220 yard, 4 touchdown explosion against Juan Crespo’s beloved Green Bay Packers was a 49ers post season record (and they’ve played in a few post season games over the years).

The 49ers were in a tough spot with Mostert going into contract negotions. His 2018 contract paid him to be their best player on special teams, not their star running back. San Francisco have Tevin Coleman and Jerick McKinnon on running back contracts already, and were balking at paying Mostert, even after sending 3rd string running back Matt Breida to the Dolphins.

Subsequently, a “trade request” was issued by the Mostert camp on July 8th (but was quickly retracted).

As mentioned in the tweet at the top of this article, Mostert received a signing bonus and reworked his 2018 contract extension to include incentives that could double his base salary.

This is essentially a “prove it” deal from the 49ers. When Mostert goes off again in 2020, I expect this contract to be ripped up and something more long term put into place.

OUR GUY IS GETTING PAID!