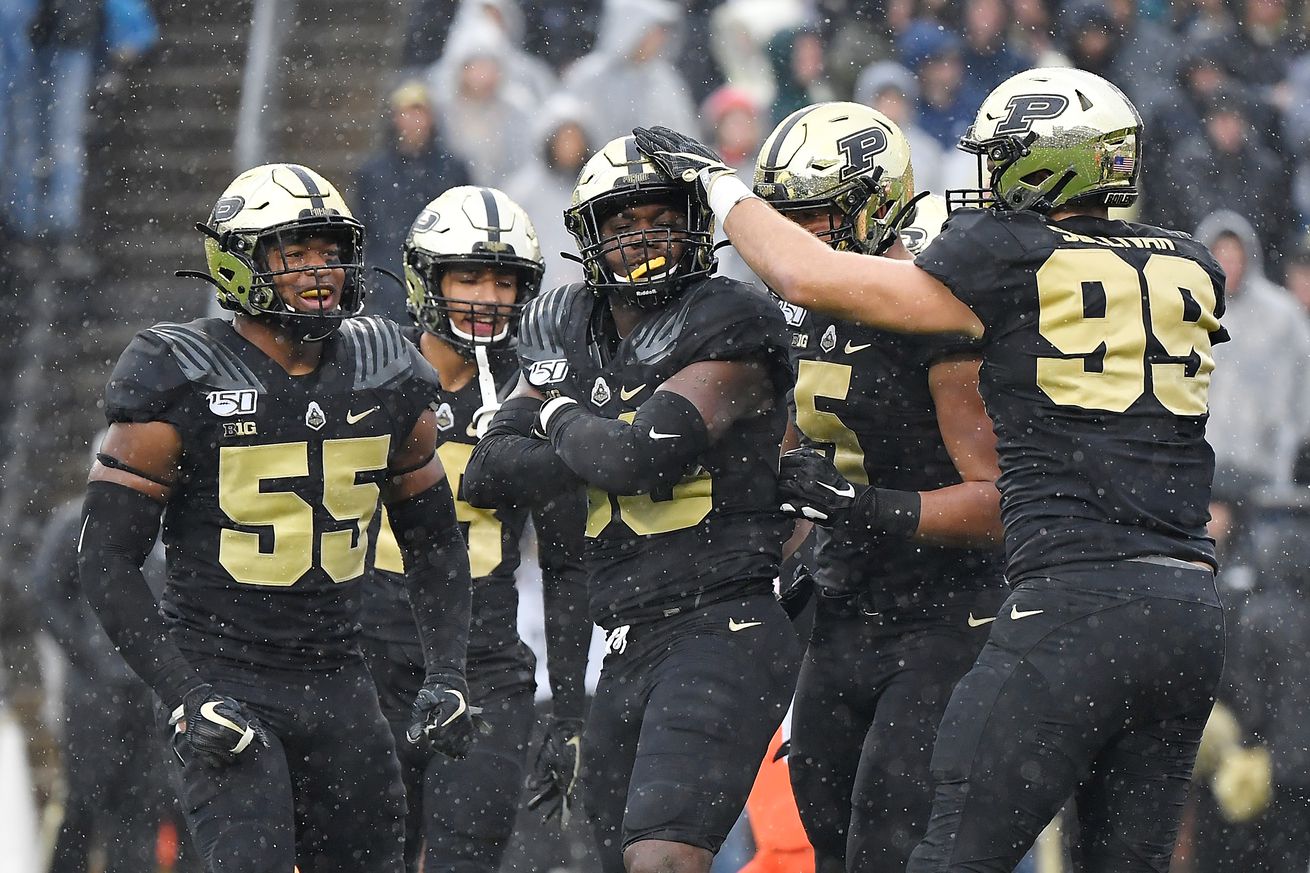 At the moment, Purdue has precious few defensive slots for the 2022 class. That could change, but this is where it stands now.

Hey y’all, I’m back to look at the open slots for defense in the 2022 class, and like the 2022 class on offense (which you can read about HERE) there are precious few spots (currently) available.

Let’s get straight to the action.

Purdue doesn’t lose a defensive tackle in the 2021. That also means Purdue won’t have a senior defensive tackle on the roster in 2021 unless they bring in a grad transfer, which isn’t outside the realm of possibility.

Purdue loses 2 defensive tackles in 2020 in Lorenzo Neal and Anthony Watts and have yet to fill either spot in the 2021 class. Current 2021 commit Khodae Sydnor is a versatile defensive linemen who, while nominally a strong side defensive end, could kick inside to the 3 technique when Diaco wants to go to a 4 man line, but he isn’t a 1 for 1 trade for Watts or Neal (Neal will play nose and Watts will play a big defensive end in a 3 man front this year).

If anything, I see Sydnor a versatile George Karlaftis replacement, but the coaching staff may view him as an eventual replacement for Watts once he spends a few years in the program. He’s somewhere around 6’4-6’5 and 230 pounds (according to both Rivals and 247 sports) and will need to add some serious bulk to his long frame if he wants to slide into the “big” defensive end role.

First, I know for a fact that Robert McWilliams III will be out of eligibility following the 2021 season. Listed as a defensive end, the change in defensive schemes may help McWilliams because he’s more of a tweener LB/DE, and that is an actual position in the defense now. Robert has been killing it in the classroom, being named to the Academic All-Big Ten team in both 2018 and 2019. Hopefully we see him kill it on the field in 2020 and 2021.

Now the tricky part. Karlaftis will be a sophomore in 2020 and a junior in 2021. If he continues his freshman work rate and figures out how to close out the sack when he gets to the quarterback, he could be looking at the first round of the 2022 draft. He has the measurables the NFL loves at 6’4, 265 and he’s only going to get bigger and badder over the next two seasons. If things go according to plan, he’ll have a big decision to make after his junior year. Adding Yanni to the 2021 class might make the decision harder, but if I’m putting odds on George leaving early, it’s probably 70/30 in favor of leaving.

The positive side of Karlaftis leaving early is that in order to do so, he would probably end up being 1st Team All-Big 10 and either First or Second Team All-American as a junior. When someone the caliber of Karlaftis signs with a school like Purdue, the school needs to pay it off and show other recruits of his caliber that they can get the job done. If he leaves for the NFL as a junior, Purdue will have a nice line to add to their recruiting pitch for future 5* recruits.

Defensive end is still tough for me to get my mind around in the Bob Diaco defense. Looking at his other defenses, he likes to play 2 guys you would consider defensive tackles in a 4-3, and then more of a true strong side defensive end in his 3 man fronts. He likes to kick his big defensive end down to the 3 technique defensive tackle spot and slide a hybrid DE/LB down to end when he transitions to a 4 man front. He wants to be flexible enough in personnel to do that on the fly, without bringing in a sub package. It’s tough to find recruits that can put their hand in the dirt and play the zone coverage scheme that Diaco favors. Linebackers that can slide down are easier to find than defensive ends who can move back and cover.

However many defensive ends go out (1-2) need to come back into the 2022 class. Diaco needs a chance to recruit specifically for his defense, and in order to do that, he needs, at minimum, a chance to replace all the defensive players that leave.

Jaylan was the highest rated defensive player in the 2018 recruiting class and one of the few members of that class to play as a freshman. He was a useful reserve last season, playing in all 12 games and starting 6 after injuries depleted Purdue’s linebacker group. It’s always nice when you talk a guy up in your recruiting articles and get to see it come to fruition on the field. His 10 tackle (6 solo), 3 TFL performance against Penn State last year made me feel good about myself. His 2020 and 2021 will make me even more insufferable than I already am. Jaylan has the physical tools to play in the NFL and needs to be a star for the defense this season. If the defensive line can keep him somewhat clean, the former high school wide receiver is a sideline to sideline heat seeking missile.

DaMarcus was my favorite signing in the 2019 class. Bob Diaco needed a thumper at linebacker to make his defense work and landed a 6’3, 260 beast from the JuCo ranks (yes, he’s a linebacker and not a 6’3, 260 safety like he’s listed on the official Purdue website). Oh, and he played limited snaps at running back his freshman year of JuCo ball if you’re wondering about his athletic ability. He’ll have the 2 seasons to show what he can do in the Big 10. I predict every running back in the Big10 will know his name around week 3 or 4 and refer to him as “the bad man in the middle of the Purdue defense that hurts people.”

Much like defensive end, I expect to see Purdue step up the size of their typical linebacker recruit under Diaco. 2021 linebacker commitment Tristan Cox, at 6’3, 235 (my favorite 2021 recruit at the moment) will be closer to the norm, as opposed to the smaller linebackers Holt favored.

Linebacker is a flexible position in this defense, and with 4 on the field in the base, it wouldn’t surprise me to see Purdue take 3 next year. Cox may be the only linebacker signing in the 2021 class, leaving room for an additional linebacker in 2022 if the scholarships are available.

Purdue loses 2 potential starters at corner in 2021. Mackey started 9/12 games last season for the Boilermakers and is in prime position to start 12/12 games (or however many games there are) in 2020. He led the team in pass breakups and was tied for the team lead in interceptions. Diaco’s Louisiana Tech defense led the nation in interceptions last year, and Mackey will have plenty of opportunities to sit in his zone and make plays on the ball.

Howard was another junior college addition to the 2019 class, and like Mitchell, he should make an instant impact for the Boilermakers. Purdue is loaded at safety in 2020 but the two starting corner spots are up for grabs. I expect Howard to either win one of those spots outright or be the first corner off the bench and see extended playing time.

Purdue has a big corner in Brandon Calloway committed in the 2021 class and I expect that to be the template going forward. You should see more “is this guy a safety or a corner” offers than “oh, this guy is obviously a corner” in the future. Diaco likes to play off and have his defensive backs rally up to the ball and make tackles. He also likes corners who can catch the ball. He has the job at Purdue because of his secondary at Louisiana Tech. He’ll obviously take a smaller corner if the talent jumps out, but look for big boys like Calloway (6’2, 180) more often than not.

Safety is the one position on defense I’m 100% comfortable with at the moment. Purdue may only have 2 functional nose tackles on the roster, but the safety depth is impressive. The Boilermakers don’t lose a safety in in 2021, but don’t be surprised if Diaco and staff swing for the fences at this position anyway.

This is one spot where they can be highly selective, shoot for one of the top guys on their board, and call it a day at the position if they can’t land someone they like. I think high school safeties are going to like what Diaco does with the position in his defense and Coach Poindexter is one of Purdue’s best recruiters. I’d be surprised if the 2022 class doesn’t include at least a hybrid CB/S if not an out and out safety. In the future I may lump corner and safety together because it’s going to be hard to tell the difference between the two positions in the Diaco defense.

Much like the offense, the 2022 defensive class is in a numbers crunch out of the gate. Nose guard is the position to watch in 2022. Unless something changes, Purdue won’t take a nose guard in the 2021 class and will need to go all-in for a ready made solution in 2022 with Lawrence Johnson being the only true nose left on the roster by that time.

More spots will open up, but as of now, I hope for a small but high profile group of defensive players in Bob Diaco’s first real recruiting class of his Boilermaker tenure. He was playing catch up in the 2021 class, and it hasn’t gone great as of yet, but putting together a solid 2020 defense could boost the 2022 class. Hope springs eternal that Bob and company get it sorted out and hit the 2022 recruiting class with the strength and tenacity of George Karlaftis bearing down on an opposing quarterback.