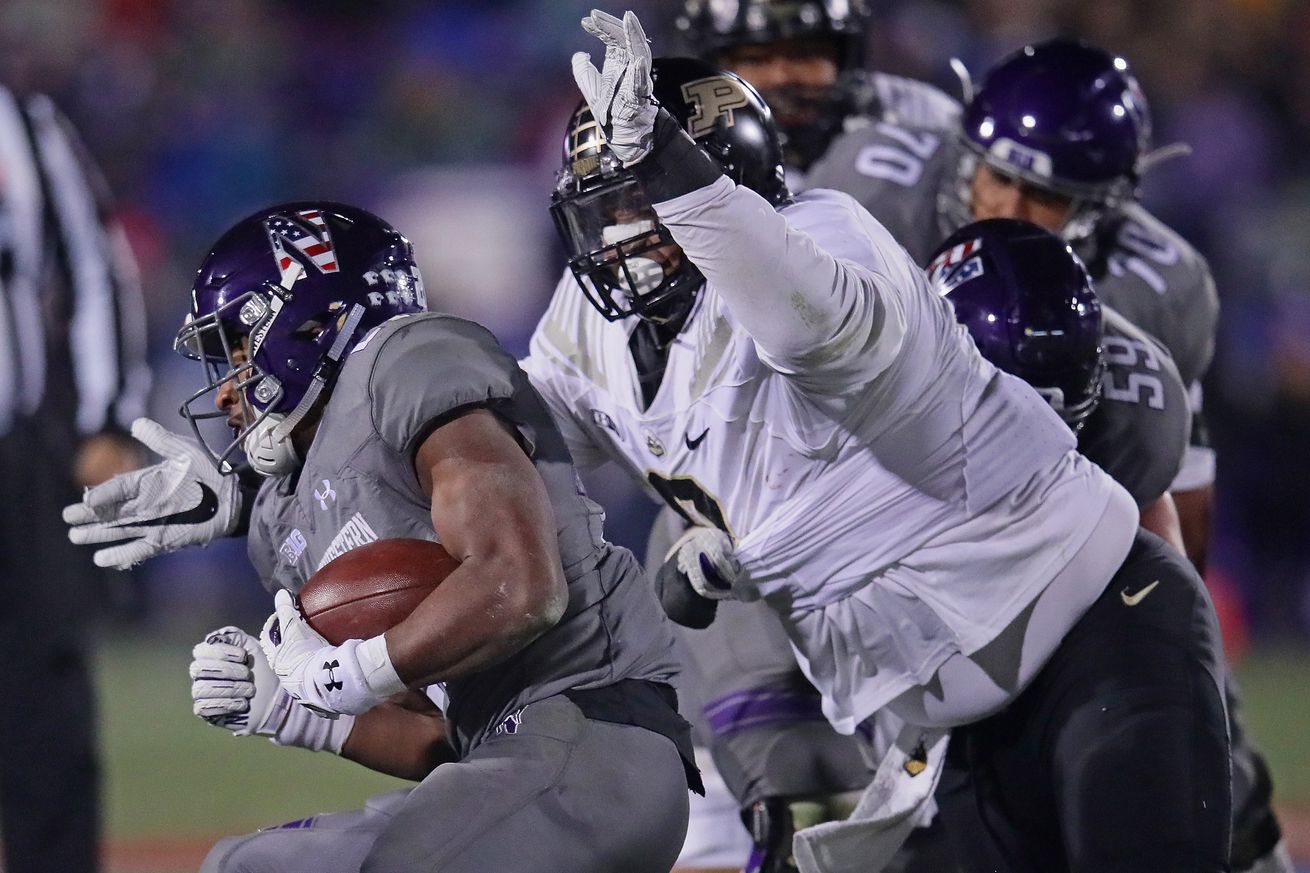 Nose guard is the toughest position to recruit in college football, and for Bob Diaco’s defense to work, he needs a nose guard. Derrick Shepard is a 6’3, 315 pounds beast out of Kettering, Ohio and is the prototype for what Purdue needs in the middle of their 3 man front.

There is a reason you don’t see many teams running a 3 man front in college football, and it all revolves around the nose guard position. Guys like Derrick Shepard are born not made. Don’t get me wrong, it still takes incredible work ethic and desire for a guy as big as Derrick to become a D1 prospect. Just being big isn’t enough to play football these days, but it’s almost impossible to take a smaller player and turn them into a nose tackle.

Take 2020 commit Bryce Austin,for example. Austin is an enormous human being. No one is going to look at Bryce and say, “man, that kid could stand to add 30 pounds.” For Bryce to jump from 285 to a Derrick Shepard sized 315, that’s exactly what he would need to do. Most guys at 285 coming out of high school don’t have the frame to carry that weight, much less carry that weight and maintain any semblance of athleticism. Shephard has the frame to carry the weight and still move like he weighs 285.

Shepard is a pure nose guard in Purdue’s scheme. He would line up over the center and give him nightmares all game long. What separates him from other potential nose tackle recruits is his ability to move. Sure, he’s a guy that can anchor and eat up double and triple teams on the interior, but he’s more than large stump in the middle of the defense.

As you can see, Derrick moves well for a man of his enormous stature. He’s not a guy listed at 315 that should probably be closer to 280. He’s a guy that carries his weight in his lower body and not in his midsection. It’s hard to call someone a “trim 315” but he doesn’t look like he spends his days crushing pints of ice cream and chugging Mountain Dew. He looks and moves like an athlete. That carries over from the practice field to his game film.

In terms of Purdue recruiting, I love the fact that you see him anchor a 3 man front several times in his film. He has a solid get off at the snap and is always moving forward or scraping down the line. As I’ve mentioned several times, he moves well…period…not just for a man of his size. He also does a nice job of staying patient and locating the ball instead of blowing up whoever is in front of him, which he is more than capable of doing.

Lorenzo came to Purdue listed at 6’3, 315. Coming out of high school, I was most impressed with his ability to move at his size. Shepard doesn’t have the “dancing bear” feet of Neal just yet, but he’s only a sophomore. Add a slick spin move to his repertoire and put him in a black and gold #9 jersey and it would be hard to tell them apart. I’m not saying he’s Lorenzo out of the box, but he has that potential, and Lorenzo has the potential to be a first round draft pick in the NFL.

This is where things get tough. Everything I’ve typed about Derrick so far is what makes him such a tough recruit to land, because everyone wants a player with his skill set in the middle of the defense.

He currently holds 13 offers, and that number is only going to increase as teams get deeper into 2022 recruiting. His offer list includes teams like Michigan and Florida State, two teams known for their ability to recruit high level defensive tackles. Ohio State hasn’t pulled the trigger on an offer yet, but it looks like a matter of “when” and not “if” for his invitation to join the Buckeyes.

Looking at his offer list alone doesn’t inspire much hope, but Purdue does have some interesting things to sell that other programs are lacking.

If I’m Purdue, I’m putting on the Lorenzo Neal highlight package and letting Derrick take a nice long look. Much like Lorenzo, Derrick would be “the man” in the middle of Bob Diaco’s 3 man front. He would be a major piece in the Purdue defense the moment he stepped onto campus. He would have to earn it on the practice field, but I wouldn’t anticipate much waiting around on the sidelines if he signed with the Boilermakers.

Playing in a 3-man front would also give him some great tape for the NFL. Just like college football, if you want to play a 3 man front in NFL, you’ve got to have an anchor like Shepard. What better way to show a team you can play nose in a 3-4 NFL scheme by playing nose in a 3-4 college scheme. Teams like Steelers, Ravens, and Texans wouldn’t need to project his ability to change from a 4-3 to a 3-4, the tape would be in front of them.

The ability to play early and feature as a true nose tackle are Purdue’s best selling points.

All that said, this is an uphill battle. Purdue has some nice things to offer, but so do other schools with higher profiles. Bob Diaco’s ability to recruit guys like Shepard to Purdue will make or break his tenure with the Boilermakers. If he’s going to make it, he’s going to need to beat out teams like Michigan, Ohio State, and Florida State for the occasional nose tackle.

Recruiting guys like Derrick will never be easy, but Purdue is going to have to get it done.