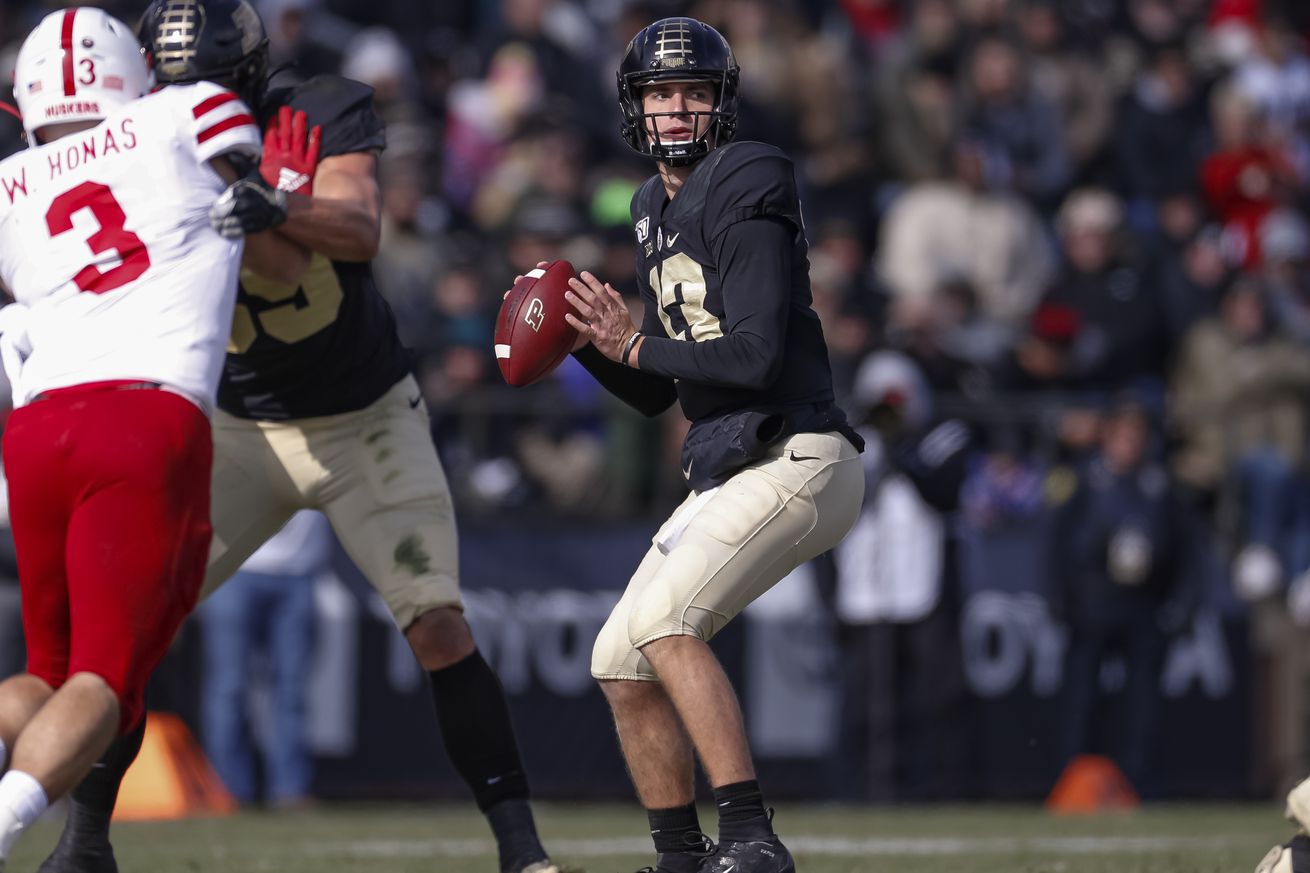 Let’s talk a little actual football for a change.

This article is focused solely on Purdue football. I do not intend it to be a place to discuss anything other than the topic at hand. There are other articles available for that discourse, but at some point Hammer and Rails is a sports blog, and I’d like this article to be a Purdue football oasis. I will closely monitor the comment section, and will be quick with the nuke button if things veer off this narrow path.

I also want to note that everything I talk about in these articles should be read through the narrow lens of Purdue football. If I say “this may turn out to be a blessing for X player” please understand that I’m speaking only about on the field Purdue football.

This isn’t a blessing to anyone in the grand scheme of things.

When it was initially announced that Austin Burton was grad transferring to Purdue with two years of eligibility, I was skeptical of the move. Now it appears to be a master stroke by Jeff Brohm.

One of my main concerns was Burton having limited time to learn the playbook and develop a rapport with the receivers. All of those concerns are now put to rest with the delayed 2020 season. Burton is coming from Chip Kelly’s (remember when he was the talk of college football?) read option system, and while Brohm does incorporate some of that into his offense, that’s where the similarities end. This break will give Austin the opportunity to start on equal footing with every other quarterback on the roster. After the spring, if he’s the man, he’s the man. If he’s not, there are no built in excuses. I’m sure that’s the way he prefers it.

The delay benefits quarterbacks other than Burton as well.

It gives Jack Plummer more time to continue rehab on his surgically repaired leg and get on the same page with the receivers. I doubt he has done much live throwing since his gruesome leg injury. He should be 100% in the spring and ready to compete for the job.

Plummer was thrown into the fire last year after the disaster against Minnesota, and it was a mixed bag for the gunslinger from Arizona. When he was on, like he was in the Maryland game, he was incredible. You don’t roll out of bed and throw for 420 yards and 3 touchdowns while completing 80% of your passes against a Big10 team. At the same point, he threw 8 interceptions and 11 touchdowns total. That’s not great.

I would keep in mind, however, that David Blough threw a bunch of interceptions before he figured things out his senior year. Brohm’s system asks the quarterback to make decisions on almost every play and he doesn’t water down much. Plummer played in 7 games last season, and in 3 of those games he attempted over 40 passes (including a 50 pass outing against Iowa). When a freshman is asked to put the ball in the air that many times, he’s going to throw it to the other team on occasion. I’m interested to see how he looks with 7 games under his belt.

I didn’t anticipate incoming 4* quarterback Michael Alaimo to factor into the quarterback competition in 2020 for many of the same reasons I questioned Burton’s ability to win the job. There simply wasn’t enough time, and not enough practice reps, for Alaimo to show what he can can do. Now he’s on campus, has the playbook, and has all fall to get acclimated. He’s the highest rated quarterback recruit of the Brohm era for a reason. I think he’s in play at quarterback now as well.

That brings us to Paul Piferi. He seems to be the odd man out in these conversations. There are whispers he showed up with bad mechanics after tinkering with his release before coming to Purdue. I have no idea if this is true, but I’ve seen it repeated enough that I thought I should mention it. If this is the case, he has another 5 or 6 months to get everything ironed out. At 6’5, 230, he’s a big quarterback, but he can run a little as well. I was excited about his potential when he signed with Purdue and I hope he gets a chance to show his abilities. It seems like it’s now or never for Piferi.

The only quarterback I see spring football potentially hurting is Aidan O’Connell. He was my favorite to win the job in fall camp because he was coming in healthy and with a complete grasp of the playbook. That head start is now gone. At the same time, if he comes out and wins the job in the spring, all doubt is eliminated. The other quarterbacks have no excuses. If O’Connell wins the job, it won’t be because Burton didn’t know the playbook or Plummer was injured, it will be because he was deemed the best quarterback.

One thing I’m not certain of (and I doubt anyone else is either) is how coaches are going to treat a shortened spring season. This question became even more complicated with the announcement that the NCAA was giving everyone a mulligan in terms of eligibility.

Don’t get me wrong, I 100% expect Jeff Brohm to go out and try to win every game on the schedule. That’s how his brain is programmed. One of my gripes about Brohm is that he’s almost too focused on the play to play aspect of football and loses track of the big picture (i.e. running a quarterback draw w/ Eli Sindelar at the end of the Vandy game may have been the best play call that exact moment, but may not have been the best play call when you consider the bigger picture). Another small complaint on the Brohm front has been his penchant for playing multiple quarterbacks, although last season he did so mainly out of necessity.

This spring is the perfect opportunity for him to play multiple quarterbacks. Every quarterback on the roster has multiple years of eligibility left. Whoever comes away with the starting job at the end of the sping should be the starter (barring injuries) for the fall 2021 season and the 2022 season. I don’t want there to be any questions about who is leading the Purdue offense going into the fall 2021 season. I’m hoping that any of the 5 quarterbacks on the roster that show enough in practice to earn the shot, gets a shot this spring.

That’s right folks, I’m 100% down for a spring quarterback winner takes all Battle Royal. I don’t know if this is feasible, or if Brohm would even consider it, but it is an intriguing possibility.