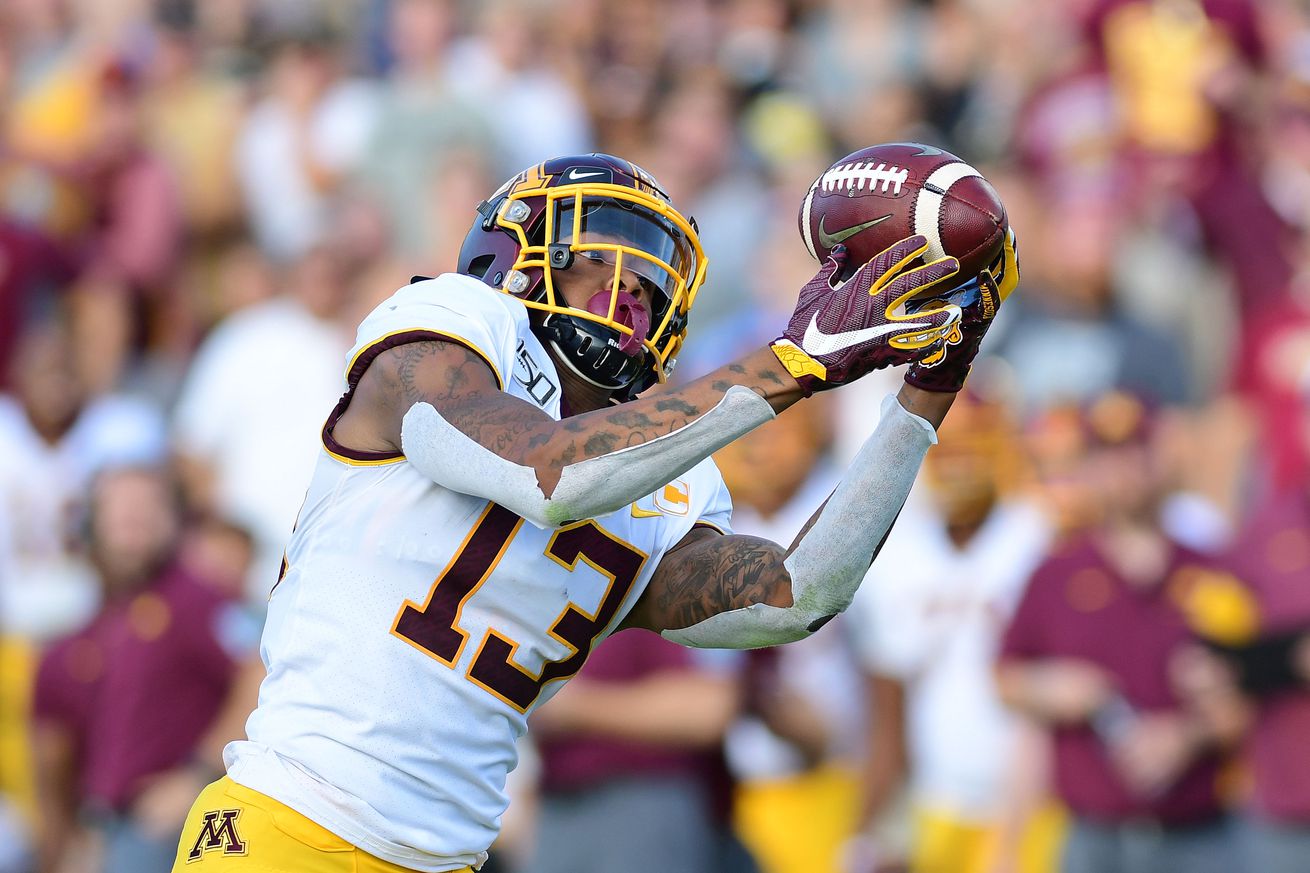 Since we have a compressed schedule this week with a Friday game everything is moved up a week. Sure, we’ll keep Friday Drankin’ on Friday but everything else is a day earlier. Minnesota is used to this, however, as this is their third Friday game in four weeks.

Even though the Gophers are struggling this year this is a game that really concerns me. They were excellent last season. Their 38-31 win really wasn’t that close, as a couple of late King Doerue touchdowns made it a lot closer than it really was. Purdue gave up a ton of big plays and, of course, lost its two best offensive players in Elijah Sindelar and Rondale Moore on the same play. If there is one thing we have learned it is that we cannot discount the “someone, somewhere in Purdue athletics will suffer a major injury when we play Minnesota” factor.

Purdue has yet to win in TCF Bank Stadium. We’re 2-1, but haven’t looked particularly good in going 2-1. This needs to be a game where we turn it around a bit. With some help we can still win the Big Ten West, but not if we don’t win this game.

After going 11-2 last year and finishing in the top 10 The Gophers have already dropped three games. They were missing several players in their season opening 49-24 loss at Michigan, which was significant because otherwise, Michigan has been awful. The next week they had a big lead at Maryland before completely collapsing in an overtime loss. They blew out Illinois, but got blown out at home by Iowa last week.

This team has been wildly inconsistent. They have two of the better offensive players in the conference, but the quarterback play has regressed. They were good against Illinois in all phases, but the defense is the worst in the conference at 35.8 points per game given up. It really is a case of “what Minnesota do we get?”

Who to Watch on Offense

Mohamed Ibrahim – RB – Ibrahim has been the best running back in the Big Ten, and it really isn’t close. He has run for an astounding 715 yards and 10 touchdowns in four games. He has done it all on 130 carries, and the player with the next most carries in the conference is Stevie Scott III at Indiana with 88. No one else in the league has even rushed for 400 yards total. He went over 200 yards with four touchdowns against both Maryland and Illinois. We may not get our traditional “Wisconsin running back runs wild on Purdue” this year, but Ibrahim is more than happy to fill in there, especially when he missed the Purdue game last season and didn’t get a chance to.

Rashod Bateman – WR – Bateman initially opted out this season, then opted back in like Rondale. The only difference is Bateman has actually played. He has also played like the best receiver in the Big Ten. He has a league leading 32 receptions (though he has played one more game than David Bell, who has 31) for 413 yards and 2 touchdowns. He also absolutely smoked Purdue’s secondary last year. He only had six catches, but went for 177 yards and two scores. He is an NFL caliber receiver.

Tanner Morgan – QB – Morgan was great last year. He had over 3,200 yards passing and 30 TDs against only 7 interceptions. That makes this year a bit of a disappointment. He is below 200 yards per game and has just four touchdowns against four interceptions. He has lost nine points on his completion percentage and that is with two good receivers in Bateman and Chris Autman-Bell. The Purdue games last year was one of his best with 396 yards and 4 touchdowns while going 21 of 22.

Who to Watch on Defense

Minnesota’s defense lost seven starters from a year ago and has been very inconsistent. I think you can throw out the Michigan game because so many players on both sides were missing, but Iowa and Maryland pretty much did what they wanted, when they wanted to. Taulia Tagovailoa ran circles around them and Maryland running back had 221 yards and a score. Now Aidan O’Connell is not going to run all over the place like Tagovailoa, the run defense especially has been bad at a league worst 238 yards per game. They are basically the opposite of Northwestern. We have shown we can have a running game this year against Iowa and Illinois, so there should be room to run for Zander Horvath and King Doerue. The pass defense has actually been pretty good at 209 yards per game, but they have played the 4th, 6th, 9th, and 14thbest passing games in the league. Purdue is the best in the league at 305 yards per game.

Boye Mafe – DL – Mafe is off to a good start at 3.5 sacks per game, which is more of a pass rush than Purdue has had minus George Karlaftis. His 3.5 sacks leads the Big Ten and with a less than mobile quarterback Mafe can be a problem.

Tyler Nubin – DB – It is often not a good thing when your leading tackler is a member of the secondary, but Nubin has a team high 25 tackles through four games. He has also forced a fumble. As a team Minnesota has created just three turnovers while the offense has given up five. Purdue’s ball security could certainly be better with two interceptions and three fumbles lost, but Cam Allen alone has created as many turnovers as Minnesota has as a team.

Mariano Sorin-Marin – LB – Sorin-Marin has been the top linebacker so far with 20 tackles, but this is a defense still searching for an identity. They have given up a lot of chunk plays so far. They are 12th in the league in total defense at 447 yards per game. Purdue simply has to break out of the offensive funk it was in against Northwestern.

Who to Watch on Special Teams

Brock Walker – K – The kicking game has been a little shaky. They lost the Maryland game because of a missed extra point in overtime and they have platooned kickers. Walker is the only one that has tried a field goal and is 2 of 3, but Walker and Michael Lantz have split extra points. Both have missed an extra point. So far J.D. Dellinger has been automatic without a missed kick.

Matthew Stephenson – P – Purdue’s punting game has been bad, but Minnesota’s has been worse. Stephenson is averaging just 34.9 yards per punt. Neither team has exhibited much of a return game, so if either one can break a return in the punting or kicking game that would be huge.

How much of Purdue’s struggles last week were due to Northwestern’s defense? O’Connell’s tendency to focus on Bell and the complete lack of a running game are serious concerns, but this is a week to break out of that. Purdue did generally well against Illinois except in finishing drives. Twice Purdue failed to score inside the five, but were able to erase those mistakes with turnovers that immediately got them back in range. That is not a long term tenable strategy. So far I feel like the offense has done just enough to win. It had multiple chances to tie vs. Northwestern but could not get it done. This is the worst run defense in the Big Ten. If we can’t run on them we can’t run on anyone. Horvath at least cracked 100 yards againat Iowa, who is fourth in the Big Ten. If he or King Doerue can’t do it (and Doerue had 126 yards from scrimmage and 3 touchdowns against them last year) it is due to a lack of commitment to the running game.

Bateman and Ibrahim are also extremely good players and hard to stop. In fact, we’re not stopping Ibrahim. It just won’t happen. The run defense was quite good against Northwestern, but Ibrahim is a different monster altogether. Given Morgan’s struggles it might be best to stack the box and dare him to throw, but Bateman is good enough to say, “Okay. You do that” and beat us in one on one situations. He is the type of receiver that might only get 5 passes, but breaks three of them for 50-60 yards.

This feels like tipping point game for Purdue. We failed in the prove it game against Northwestern, but the next three games against Minensota, Rutgers, and Nebraska come against much worse teams and defenses. If Brohm is really going to earn his paycheck we need to get at least two of these if not all three. The offense struggling, especially in bad weather if there is weather, is going to raise a lot of concerns.