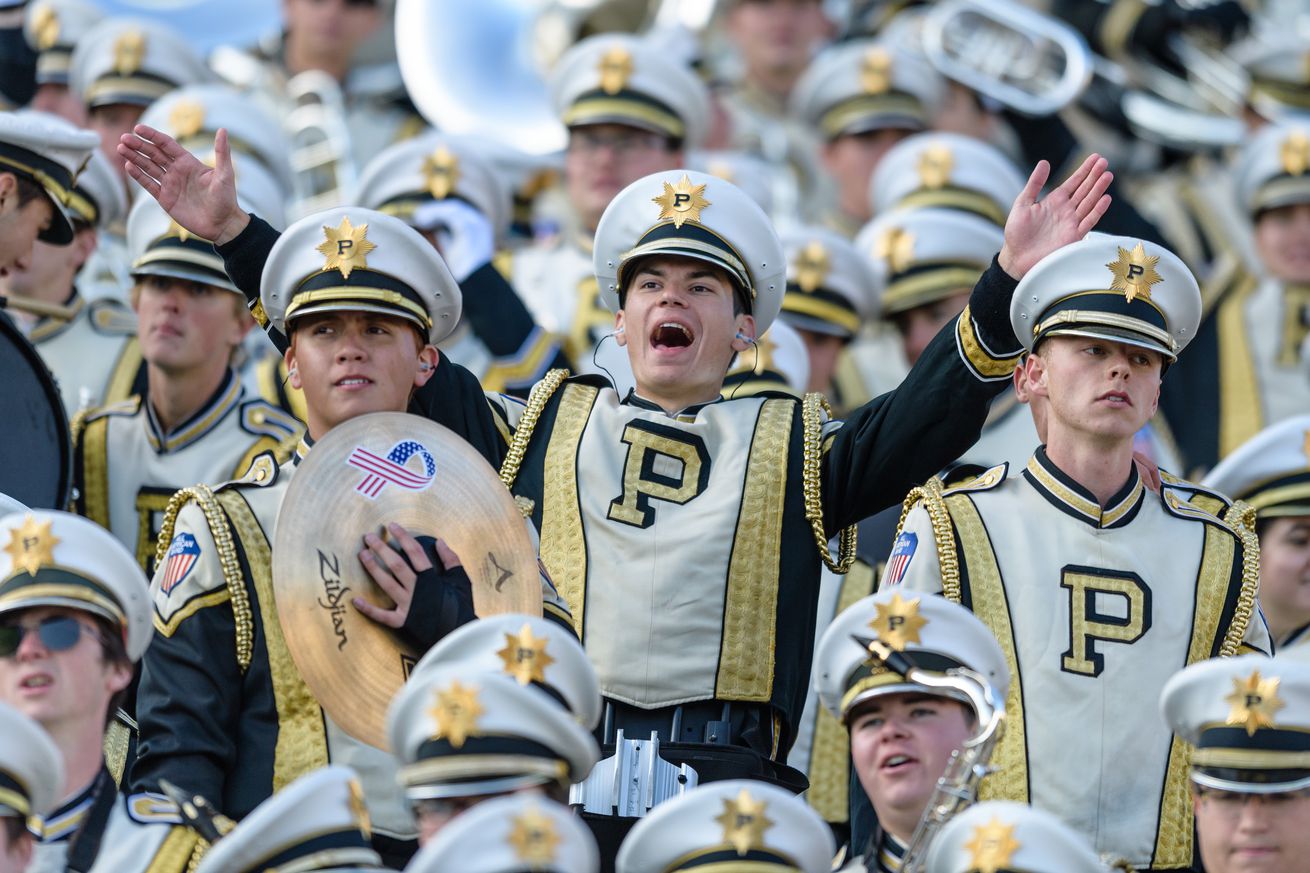 Purdue bands lost a loooooooooong time director and supporter this week at age 104.

ED NOTE: I asked former site contributor for women’s basketball Boiler Bandsman to come out of retirement and write a piece on the legendary Al G. Wright, the Purdue Bands director who passed away this week at age 104. Here is his piece:

A man retiring after 50 years in any position leaves cavernous shoes to fill, let alone one so steeped in tradition and history as Purdue’s All-American Marching Band. That was the task faced by one Al G Wright in 1954, when he took up the baton from the legendary Paul “Spotts” Emrick, founder and longtime director of the AAMB (recipient of his own Profile in Badassery). To say that he lived up to the task would be a tremendous understatement, to say the least.

Born in London on June 23, 1916 and immigrating to the United States as a child with his family, he first took up music (French Horn) at his local high school in Pontiac, Michigan. He then foreshadowed another famous Boilermaker-Hurricane connection by attending the University of Miami (FL) on a music scholarship, graduating with his bachelor’s in 1937 and his master’s in 1947. He began his career by teaching band and orchestra at Miami Senior High School from 1938 to 1954, where he led them to substantial renown amongst the band community. They became a regular feature at music education conferences and contests around the state and nation and frequent participants in Orange Bowl parades and pageantry.

From there, he was called to what would be his home for the rest of his life. Hired on at Purdue in 1954, he left a tremendous mark on the institution. Emrick had left him with some of the University’s oldest and proudest traditions, like the Drum and the world’s first marching formation, the Block P, but many others that Purdue fans will recognize were in fact instituted by Dr. Wright.

Off the field, he brought in many new creations and accolades to the university. He founded and directed the Purdue orchestra program which today boasts 3 full ensembles and over 200 performers. He founded and/or led numerous music education organizations, including the American School Band Directors Association, the National Band Association, the American Bandmasters Association, the John Philip Sousa Foundation, and others too numerous to list here. The Sousa Foundation is most known for awarding the Sudler Trophy, “the Heisman Trophy of the collegiate band world”, which would be awarded to the AAMB he helped create in 1995.

He also instituted the tradition of travel that has made the AAMB one of the most recognized marching bands in the world. During his tenure, the band would visit and perform in Colombia twice, Venezuela no less than seven times, take a three-week tour of Japan, play a two-week featured appearance at the 1979 Canadian National Exhibition, and spend three weeks on a tour across Europe. Since then, the band has continued the tradition, with performances as wide-ranging as Singapore (1997), Beijing (2008), Washington (1989 Inauguration), Colombia again (2015), New York (2010 Macy’s Parade), and Dublin (2013 St. Patrick’s Day Parade), the last two of which I was lucky enough to experience myself. Most recently, the band returned to Dublin for a repeat performance in the 2018 St Patrick’s parade. He also led contingents of Purdue band members to perform as part of the famous Radio City Music Hall stage show on four separate occasions, totalling 664 shows.

After his retirement in 1981 after 27 years with the band, Dr Wright would remain in Lafayette with his wife Gladys for the remainder of his life, until he passed away on September 5. They both remained active in the band community as teachers and staunch supporters of the band. He was an active Director Emeritus for the Purdue band program, and in 2013 the Director of Bands position at Purdue was endowed in his name as the Al G Wright Chair of Purdue University Bands and Orchestras. A bust of his likeness was added outside the band’s home in Elliot Hall of Music in 2003. In addition, Hagle Hall, the new band building currently under construction, will have its largest rehearsal room named in his honor.

One of just 5 directors in the band’s history, his impact remains to this day on a program he helped shape into a premier institution.

There’s a story told around Purdue about a Mollenkopf era team. Dr Wright was known as a very focused individual – late students would find their chair missing for that rehearsal, for instance. Busses departed on schedule regardless of who was (or wasn’t) on them, even including the man himself on one occasion. Most of all, though, the band practiced rain, shine, wind, or snow (and continues to do so to this day, as I can personally attest on several miserable occasions). On one particularly wet and cold afternoon, several players complained to Mollekopf that they should be practicing indoors. Hearing the sounds of band rehearsal floating across campus, he responded that the team would go inside when the band did. Needless to say, no one went inside that day.