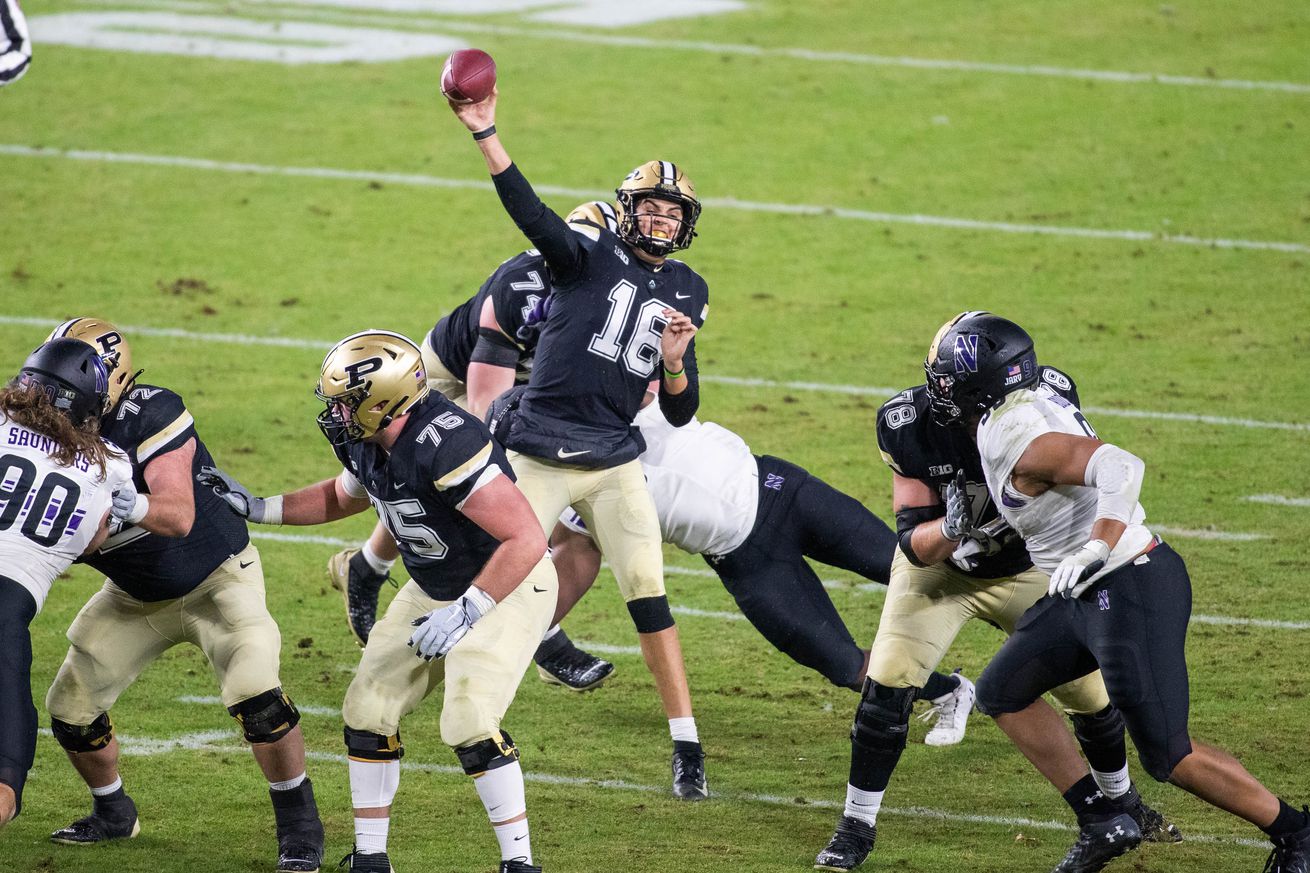 We saw this game two seasons ago.

Two seasons ago during the season opener Purdue faced Northwestern and got the ball back multiple times just down one score in the fourth quarter. The Boilers failed to do anything given those chances, the Wildcats got a late first down thanks to a penalty, and salted the game away.

Tonight was pretty much the same thing. Lorenzo Neal made several good plays to give Purdue the ball back down seven, redeeming himself for his game-sealing penalty two years ago. It was especially good because it was the first time all night the defensive line actually had a modicum of a push.

Unfortunately, the offense did very, very little to help. yes, the defense had some bad moments. It lost Ramaud Chiaokhiao-Bowman for three touchdowns and had some bad third and long mistakes, but for the most part it did its job to at least keep Purdue in it. The offense just couldn’t do it. The running game was bad. Very bad. Worst than the dreadful moments of the Hazell era bad. The longest run on the night was 14 yards from Zander Horvath, and that one play was seven times more than Purdue rushed for all night.

The Boilers finished the night with two yards rushing. Two. If I stood in my living room and fell forward, reaching the ball out as far as I could while falling flat on my face, I would have outrushed Purdue tonight.

That meant Purdue defaulted to a single offensive play for much of the first half. That play was “throw the ball to David Bell and hope he does something”. Bell is good. In fact, he is so good it is a testament to his talent that he had 7 catches for 78 yards tonight, especially when he was wearing a Greg Newsome II suit all night. Yes, Newsome was physical to the point of multiple borderline PI calls, but they didn’t call them. That is why Newsome is a good player. He saw what was getting called and what wasn’t, so he kept pushing the limit. You can complain all you want about it, but if it is not getting called in the second quarter and you’re still pursuing it in the fourth quarter it is on Purdue to make an adjustment.

And that is what is so frustrating about this game. Purdue did not play well. It has some defensive breakdowns and Peyton Ramsey had a geological epoch to throw most of the night. There was absolutely no running game. The playcalling was embarrassingly bland. Aidan O’Connell had a really bad fumble that led to a Northwestern touchdown. Jared Sparks, Jackson Anthrop, and Amad Anderson Jr. had some big dropped passes. Through all this, Purdue STILL had MULTIPLE chances in the fourth quarter to go down the field and tie the game.

That’s what sucks so much. The most imaginative Purdue got on offense all night was the long TD pass to Garrett Miller. That was a fantastic play design where the line blocked long enough for the misdirection to develop and Miller got loose for a score on 4th and 1. It was well designed and beautiful. Unfortunately, it was the one time all night that Jeff Brohm showed why we’re paying him north of $4 million this year.

Brohm is getting paid a shit-ton of money because his teams at Western Kentucky put up a lot of points. It is year four. He has an embarrassment of riches at receiver even with Rondale on the sidelines. We have access to five four-star receivers, but O’Connell focused on one all night. It also did not help that he has the mobility of the Boilermaker statue and the one time he did tuck and run he pass-faked himself into a backbreaking fumble 4 yards down field (which was still our 3rd longest rush of the night).

Yes, Northwestern played very well defensively. They have an excellent defense. Still, it can be easy to stop a team when they are running the “We are throwing to this guy” offense. I like O’Connell, I really do, but this is 2020 and you need a quarterback who at least has a modicum of mobility. If you give him a pocket he is excellent as evidenced by his great throw to Milton Wright for a TD. His longest rush in his career is nine yards and he is sitting at -49 for his career. Those RPO plays we run are with absolutely nothing when he is not a threat at all to run.

Now, to be positive. It is a weird season. We have gotten three more games than I expected to get. I have always felt this was a season where we built to a real breakout in 2021 and I still think that. With the Wisconsin game cancelled Northwestern is, by a wide margin, one of the two best teams we will play, with Indiana(!?!?!) being the other. Minnesota has sucked so far, Nebraska doesn’t play defense, and Rutgers plays incredibly hard, but still has Rutgers talent. There is no reason Purdue cannot win the next three games and build momentum for 2021. All we really lost tonight was a shot at winning the Big Ten West and a chance to be a sacrificial lamb to Ohio State in Indianapolis. A healthy George Karlaftis likely makes a huge difference tonight too.

If you look at the long game Purdue still has a very bright future, but the present as of 9:26pm on Noevember 14, 2020 is frustrating as hell because I know we can be better.