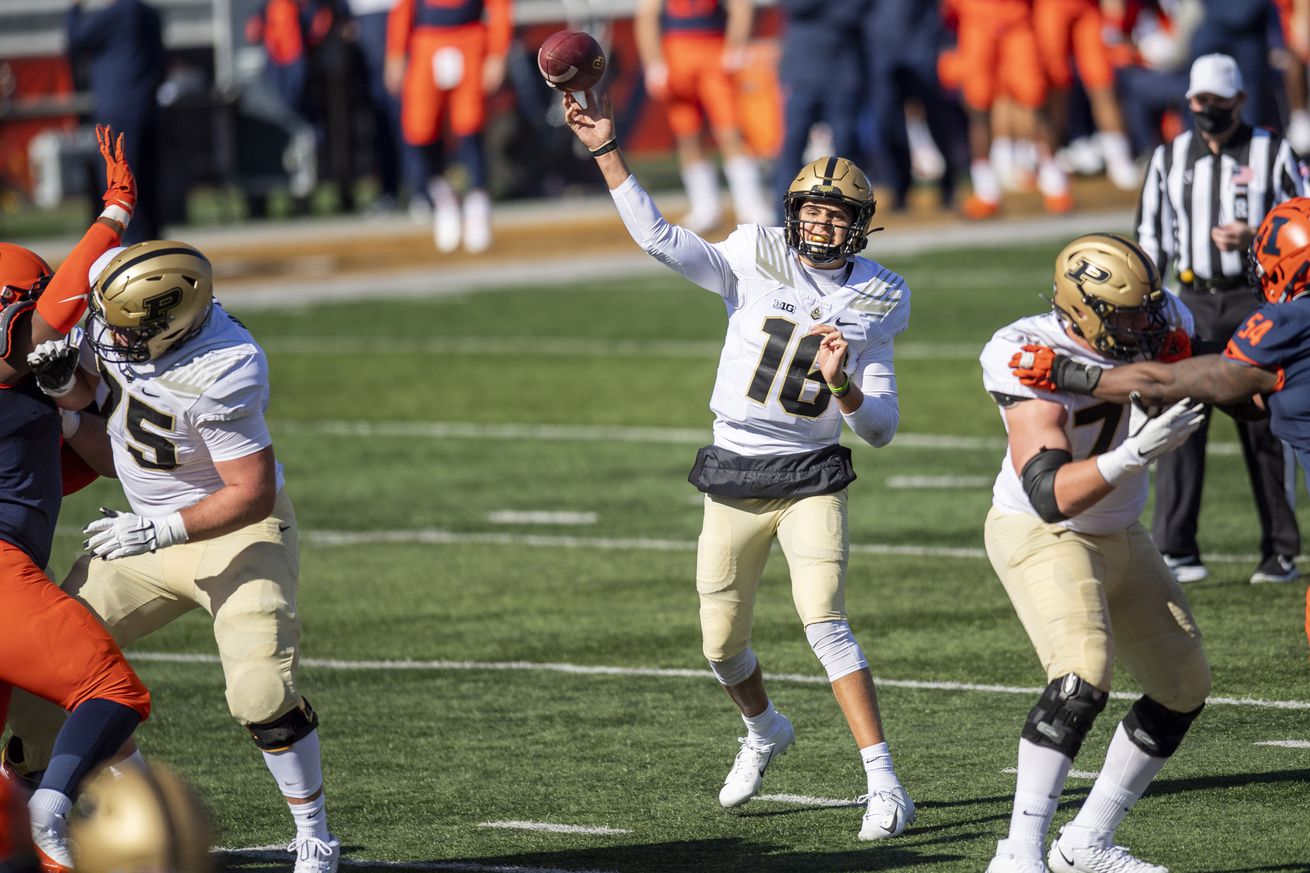 Following the week two win over Illinois and in preparation for the Wisconsin game this weekend (maybe?) head football coach Jeff Brohm stepped to the microphone for his weekly press conference.

One of the hot topics was of course the game against Wisconsin. You know of course that Wisconsin cancelled their week two game against Nebraska because they were afraid of Nebraska of a rash of positive Covid tests. Word is that Wisconsin is down to their fourth strength QB, we saw against Illinois how Purdue does in those situations. As of now Coach believes the game is still on but that if anything changes he assumes “by tomorrow we’ll have an answer” but the situation is so new no one really knows how it all works. Brohm did note that Athletics Director Mike Bobinski would be the one to receive that news and the team would go from then. Unlike Nebraska though Brohm stated that if the game is cancelled there is “no backup plan” because “in the Big Ten we’re playing every week, and if a game doesn’t happen, you move on.”

Probably the least insightful topic each week at these press conferences is the injury report. For whatever reason Brohm has decided that he’s going to tell as little as possible about every possible issue. We don’t know what type of injury Karlaftis has but we are assured that we will learn more tomorrow. Maliq Carr, Rondale Moore, Mershawn Rice, King Doerue, and Sam Garvin were all mentioned but basically we are just hoping to get them all back and real soon and we are optimistic and etc. etc. and so on. We know nothing and are being told nothing. I understand perhaps he’s trying to maintain some privacy, but first, that’s not how HIPAA works, and second it doesn’t give you much if any advantage and just drives your fans crazy.

It seems apparent that someone on the call thinks it’s time to replace the punter. A question was asked about that position being open with Brohm replying yet before following up with the fact that every position is always open.

Coach Brohm and many members of the team will take some time tomorrow to head to the polls and vote. There was a question on if the team would be going together but that doesn’t appear to be the case as Brohm said he believed a number of players had already voted. The team has no activities planned for election day because Brohm thinks “it’s important that they represent our country and go out and put their vote in. We’ve talked about it a lot. We’ve done a lot of things to make sure that everyone is getting out and voting and making a difference.”

On the sheer number of penalties Brohm merely wants the team to clean things up. The number of penalties was a bit astounding but Brohm and the questioner pointed out that six Purdue penalties resulted in Illinois first downs. Those are backbreakers for the defense. It sounds like no clear plan is in place to get that fixed but clearly the staff understands it’s an issue and is trying to work on it.

Finally, the usual platitudes were discussed about Wisconsin. They are big, they are strong, they are fast. They’ve given Purdue fits for years now. They are a team that doesn’t beat themselves and that they are well-coached.

Long story short on Wisconsin, they are good but we don’t know if the game is going to happen, and even if it does happen we don’t know who will actually be taking the field for Wisconsin. It will make game prep a bit of a challenge but that’s why they pay him the big bucks. Be on the lookout for more injury updates and more info about who is available for Wisconsin in the coming days.