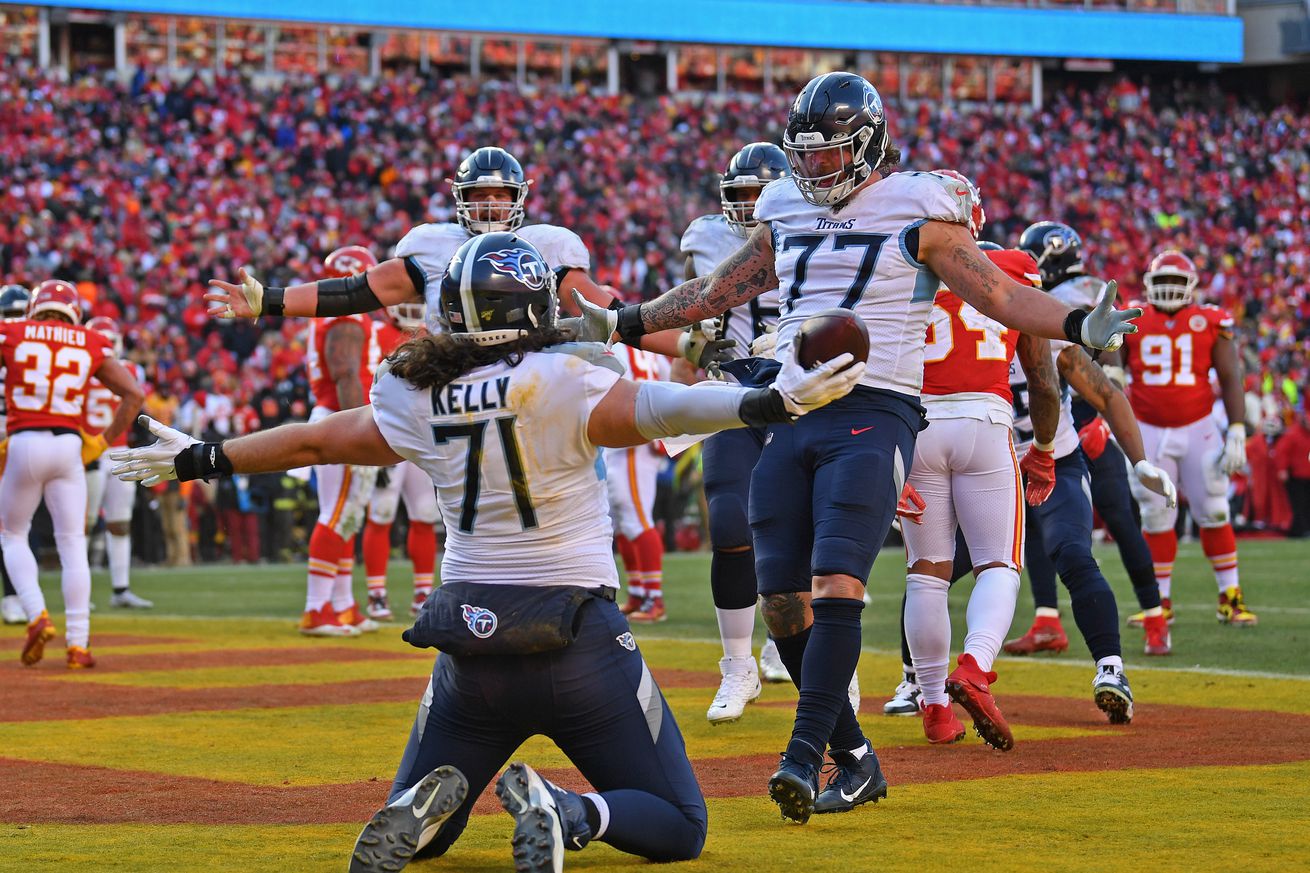 The former 2* prospect has done well for himself in the world of professional football. Come for the career summary, stay for the BIG MAN TOUCHDOWNS!

Much like Ricardo Allen, who I featured earlier in the week (article here), Dennis Kelly didn’t take the traditional route to professional football.

Hailing from Chicago Heights, Illinois, the Marian Catholic High School prospect was a late roll of the dice from the Purdue coaching staff in 2008. The 6’8, 240 Kelly played tight end in high school, but the Purdue staff saw his potential as an offensive tackle. Purdue was his only Power 5 (not a thing back then of course) offer, joining Central Michigan, Eastern Michigan, and Northern Illinois.

When Kelly signed, you have to think the coaching staff anticipated him taking redshirt season. He was the least heralded offensive line recruit in a class that featured Peters Drey and Ken Plue. Throw in the fact that he was a high school tight end in need of some serious weight gain, and it looked like a redshirt was all but inevitable.

Kelly showed up heavier than expected and the offensive tackle position needed reinforcements. Instead of sitting and watching, Kelly hit the ground running and appeared in five games as a true freshman. In today’s version of college football, he plays four and saves his redshirt, but in 2008 that wasn’t an option. Playing in 2008 did set him up nicely for an expanded role in 2009.

Dennis parlayed his part time gig as a freshman into a full time job at left tackle as a sophomore. The tall, skinny kid from Chicago Heights rapidly transformed into a tall, beefy, Big10 left tackle. He started all 12 games in Danny Hope’s inaugural season. Say what you will about Danny Hope, the man knew how to evaluate offensive linemen. Line up 100 tall, skinny high school linemen and Hope could sniff out the one with NFL talent like an offensive line bloodhound. The Boilermakers finished a disappointing 5-7 but in true Danny hope style, were snake bitten, losing 3 games by a field goal or less and 2 games by a touchdown or less.

In addition to starting every game at left tackle, Kelly was named Academic All-Big10.

Kelly built on his strong sophomore season with an even better junior campaign. He once again started all 12 games at left tackle and rarely left the field. For his work, Dennis was named the Team Most Valuable Player and was Honorable Mention All-Big10 . When he wasn’t crushing defenders, he was crushing the books, once again making the Academic All-Big10 team.

Purdue looked to be in solid position to make a bowl game after starting the season 6-2, but dropped their last 6 games.

Dennis was voted a permanent team captain after spring camp, as the Boilermakers went into the 2011 season in desperate need of a bowl season. Things looked bleak after a trip to Houston netted Purdue a mindbogglingly bad loss to Rice, but things finally broke Purdue’s way down the stretch. The Fighting Danny Hope’s won two of their last 3 games, including an overtime win over Ohio State and an 8 point win over the Hoosiers. They went on to defeat Western Michigan in the Little Caesars Bowl to finish the season at 7-6.

Dennis was again named Honorable Mention All-Big10 for his efforts on the field. In true Purdue official website form, no one bothered to update Dennis’s biography after spring camp, and I can’t find the Academic All-Big 10 team on the internet for some reason, but let’s assume he did well in the classroom.

In his four year career at Purdue, Kelly started an incredible 37 straight games at left tackle. His consistency, combined with his mammoth frame, and surprisingly nimble put him on the NFL draft radar.

Dennis was drafted by the Philadelphia Eagles in the 5th round with the 153rd overall pick.

Kelly looked like a 5th round steal for an albeit terrible Eagles team. He played in 13 games including 10 starts at right tackle. He was on the field for 60% of the Eagles snaps, and was only flagged for 1 penalty (holding).

The Eagles were counting on Kelly to play a role on their revamped offensive line in 2013, but his back had other ideas. Surgery to repair a herniated disc before the start of the preseason and his recovery was slower than anticipated. He didn’t play a single down in 2013.

Kelly battled back from back issues, but his playing time was limited. He played and started in 3 games, and participated in only 17% of the offensive snaps. It looked like he was on his way to hitting the average NFL career length, becoming a vested member of the NFLPA, and riding off into the sunset with a sore back and a nice chunk of change in his bank account.

The 2015 season is a key year in Kelly’s career. After 2 seasons of little to no work, he settled into the role that he plays today. He appeared in 14 games for the Eagles, grabbing 2 starts. He participated in 34% of the snaps as the first tackle off the bench playing a key role in the offense line rotation.

Drawn to his versatility, the Titans traded the talented but troubled wide receiver Dorial Green-Beckham to the Eagles for Kelly. He resumed his role as the first tackle off the bench, accruing 6 starts, but seeing only 14% of the total snaps in the Titan’s offense in his first season in Nashville.

Much like 2016, he received inconsistent playing time in Mike Mularkey’s offense in his second season with the Titans. He started a game, but played in only 18% of the offensive snaps. It didn’t appear that Mularkey had any plans for him outside of a “break in case of emergency” offensive lineman.

Mularkey was canned after the 2017 season and replaced by Mike Vrabel. Dennis went from forgotten man on the bench to key contributor yet again. He regularly came off the bench for either of the Titan’s bookend tackles, including 5 starts (2 in place of Taylor Lewan at left tackle and 3 in place of Jack Conklin at right tackle). He played in 38% of the Titan’s snaps (2nd highest in his career) and generally acquitted himself well at either tackle position.

In 2018, Dennis proved his worth to new coach Mike Vrabel, in 2019 he was fully weaponized as the 6’8, 325 pass catching tackle he was born to be. He started the first 4 games of the season for Lewan, frequently spelled both Lewan and Conklin and participated in 34% of the Eagles offensive snaps.

Vrabel, a fan of versatile players since his LB/TE days in New England, unlocked Kelly’s true potential in a win against the Jacksonville Jaguars. On a play from the 1 yard line he faked a block, slid into the endzone and hauled in his first NFL catch for a 1 yard touchdown. After the Titans ran through (literally, Derrick Henry is a monster) both New England and Baltimore in the playoffs, the Titans knew they needed something special to knock off the Chiefs. Kelly once again found himself as an eligible receiver on the goal line, and dialed up the exact same play from earlier in the season. Kelly caught his 2nd NFL pass for his 2nd NFL touchdown. William “the Fridge” Perry (from my hometown of Aiken, South Carolina) may be the biggest player with a post season rushing touchdown, but Dennis holds the record for largest player with a post season receiving touchdown (some fun trivia that I hope pays off for one of you at some point in your life).

While the Titans couldn’t pull off a third playoff upset, Kelly’s heroics ensured that every offensive coordinator in the NFL will be harassed by their offensive linemen for goal line receptions.

The Titans resigned Kelly to a 3 year, 21 million dollar deal to keep him from becoming a free agent.

More may be asked of Kelly in 2020 with Jack Conklin departing the Titans in free agency. Tennessee drafted massive right tackle Isaiah Wilson out of Georgia (6’6, 350) with the 29th pick of the draft, but he’s seen as a raw prospect. Expect Dennis to see significant playing time on the right side of the line while Wilson gets acclimated to NFL football.

Hopefully he gets to reprise his jumbo tight end role a few more times in 2020.