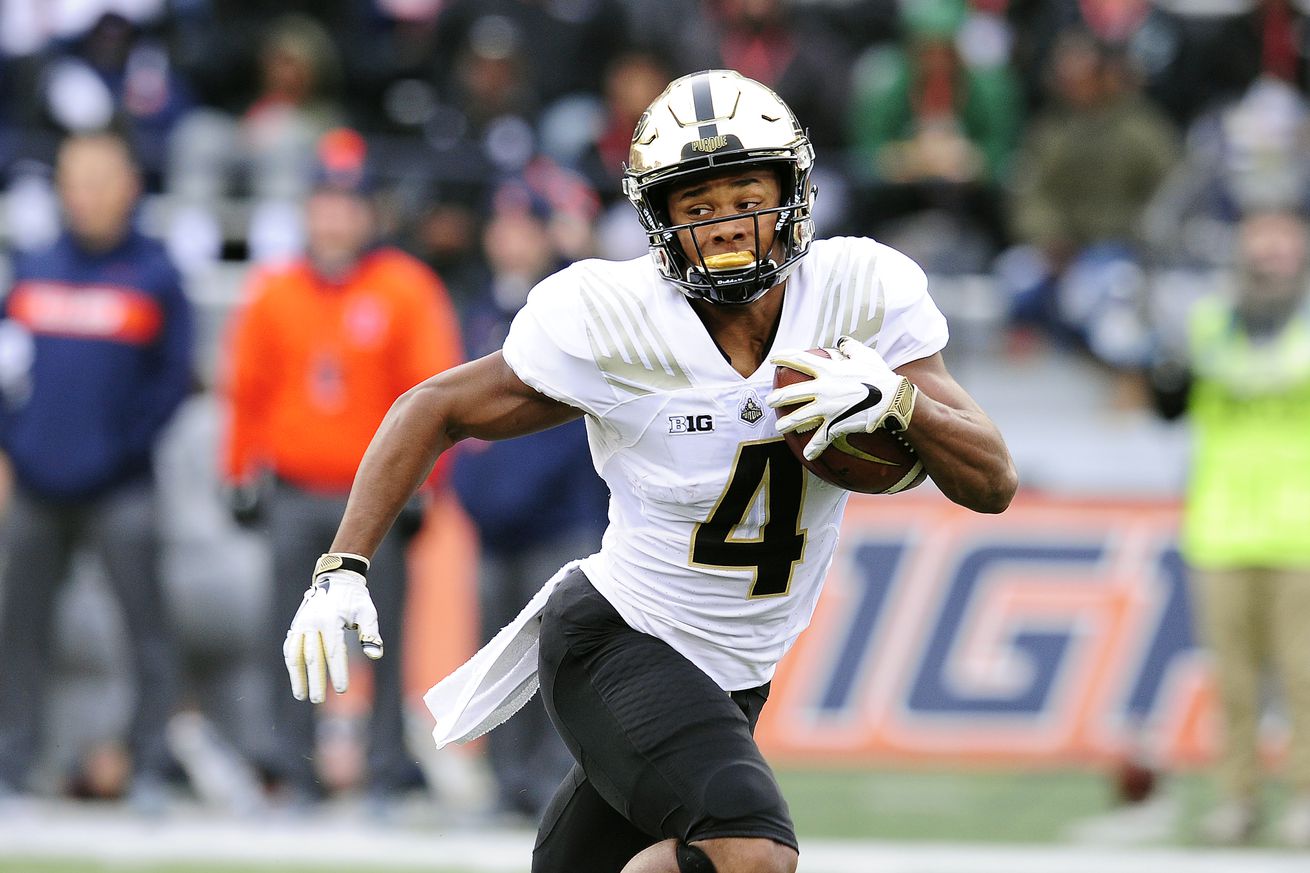 Purdue gets the Cannon back after a big game from Moore and Mackey.

Until today we hadn’t really had the monster Rondale Moore game that you would expect. He has been steady, of course, but against Illinois he really had a breakout. He had a season high 9 receptions for 145 yards and a pair of touchdowns as the Boilers brought the virtual Cannon back to West Lafayette and moved to 6-0.

This game was not as pretty as the final score looks. J.D. Dellinger missed his first field goal of the season when my thumb twitched at the wrong moment. Jack Plummer threw two more interceptions, one in the end zone, and fumbled one on a scramble. He was also sacked a couple of times.

The first drive was pretty much flawless though. After two long passes to Moore David Bell got loose for a 25 yard catch down to the one. King Doerue then punched it in to make it 7-0. After a punt and a pick Illinois finally got things going and Brandon Peters found Luke Ford for a 14-yard TD just before the half.

This is where the slop continued. Plummer threw his picks, but Dedrick Mackey kept Purdue in it with two first half interceptions. He finished the game with three interceptions, putting his total at an astonishing seven through six games since he had four against Boston College.

He was part of a defense that, overall, played really well. It gave up just the one touchdown drive and in addition to Mackey’s three picks Sanoussi Kane got a late interception. Derrick Barnes continues to be a terror with a team high eight tackles. DaMarcus Mitchell also had eight stops.

Purdue finally moved in front with a David Bell touchdown from 8 yards out just before halftime. He had an excellent game with seven receptions for 116 yards and a score. The second half saw three more touchdown drives for Purdue. Kyle Bilodeau had a 16 yard TD catch with 2:44 left in the third and then it was Moore time. His TDs of 26 and 13 yards in the second half put the game away.

There is one interesting wrinkle in this one. Milton Wright suffered a broken tibia in the second half and it said he was lost for the season even if it was played in exhibition mode. That means going forward I will have to take him out I still have Amad Anderson Jr., Jared Sparks, Abdur-Rahmaan Yaseen, TJ Sheffield, and Maliq Carr I can put in his place.

Since we’re halfway through the virtual season now here are some of the amassed stats.

David Bell – Bell also has 33 receptions, but for 454 yards and 3 TDs. I need to get hom some more production.

Jackson Anthrop – The goal line vulture has only 8 receptions for 54 yards, but has 3 TDs.

Derrick Barnes – Barnes leads the team with 35 tackles and had the big fumble-six against Rutgers.

Dedrick Mackey – As mentioned, he has seven interceptions through six games: four against Boston College and three against the Illini.