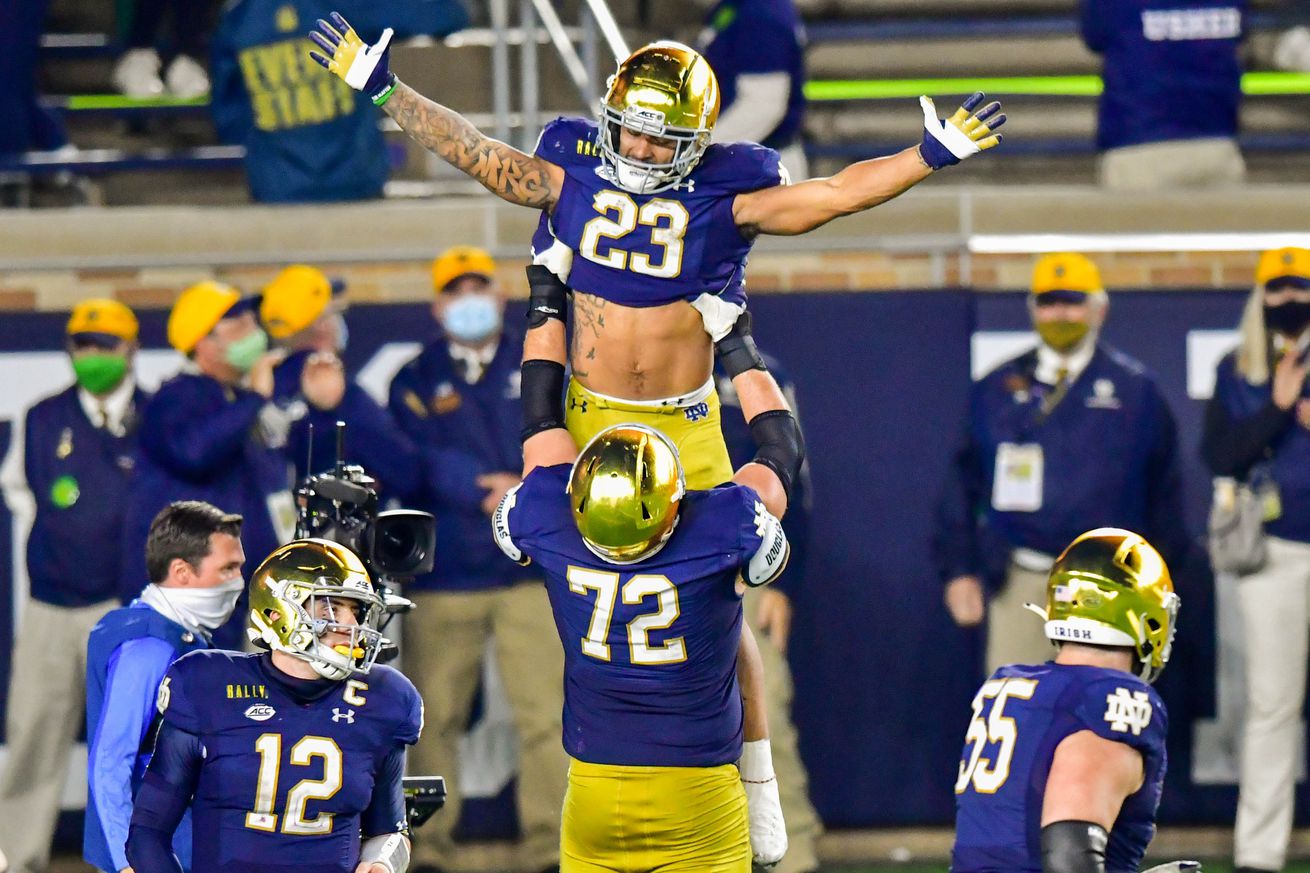 As I sat in my recliner last night around 12 AM with goosebumps on my arms and tears in my eyes, I truly could not believe what I had just witnessed. After the Notre Dame Fighting Irish snuffed out Clemson’s final play on 4th and 24, a dream I had held onto for so long finally became a reality. Having been born in 1994, I had read and heard about the improbable victories from yesteryear but never had been able to experience such a game.

My most vivid memories as an Irish fan prior to last night centered around blowouts and “close but no cigar” losses. Some lowlights include: 2005 USC, sitting in the stands at the 2007 Sugar Bowl against LSU, the 2013 National Championship Game against Alabama, 2014 Florida State, 2015 Clemson Tigers, 2017 Miami, the 2018 College Football Playoff game against Clemson, and well yeah, you get the picture.

From the opening kickoff last night, it was clear that this game would be different from any I had previously seen. Instead of holding on for dear life throughout much of the 1st half as had become customary for Notre Dame, the Irish punched Clemson in the mouth on the second offensive play of the game as Kyren Williams took a handoff 65 yards to the end zone.

Throughout the evening, Notre Dame faced countless adverse situations but managed to fight their way through them. From the continued struggles in the redzone or the inability to contain the Tigers’ passing attack throughout much of the game, Brian Kelly’s group continued to display a mettle and poise rarely seen in my lifetime.

In the 1st half, Jeremiah Owusu-Koramoah forced turnovers on back-to-back Clemson possessions. The first came when he snatched a botched pitch out of the air intended for Travis Etienne and rumbled 23 yards for a touchdown. On the ensuing Clemson possession, Owusu-Koramoah forced a second turnover by punching the ball out of Amari Rodgers’ hands after a reception. Nick McCloud picked up the bouncing ball and fell down at the Clemson 25-yard line. In one of the more underrated plays of the game, punter Jay Bramblett made a potentially game-saving tackle at the end of the 1st half when Travis Etienne appeared to be on his way to returning Jonathan Doerer’s missed 57-yard field goal attempt to the house.

In the 3rd quarter, the Irish could have folded after Clemson rattled off 10 points in a row and drew even at 23-23. They had even more reason to fold after Ian Book fumbled the ball as he was heading towards the end zone on a quarterback keeper. Instead, the team continued to fight. Despite the turnover, Ian Book turned in the best performance of his career, throwing for 310 yards and rushing for another 68 yards. Book’s lone touchdown on the night came on the miraculous final drive. After finding Avery Davis on a 53-yard strike, he threw a dart to Davis for a 4-yard touchdown on 3rd and goal.

Speaking of Davis, Davis deserved his time in the sun following a career at Notre Dame that has seen him shift from quarterback to running back to cornerback to wide receiver for the good of the team. His final 2 catches will live in Irish lore forever. Javon McKinley also continued his strong play of late, catching 5 passes for 102 yards. Michael Mayer rebounded from an early false start penalty and dropped pass near the goal line to keep several drives alive in the 2nd half. The examples of players who elevated their performance last night are endless.

While the offense had many individual standout performances, the defense collectively turned in a gritty effort. Although the defense held several lofty rankings entering the game, many questioned the validity of such rankings as they had not exactly faced many explosive offenses during the team’s 6-0 start. While D.J. Uiagalelei did turn in a magnificent performance with 439 passing yards, the defense remained steadfast in their desire to hold Travis Etienne in check. Time and time again Etienne tried to find daylight in the middle of the field, only to be swallowed up by several Irish defenders. On the night, one of the greatest players in ACC history was held to 28 rushing yards on 18 carries.

When the Irish defense needed a stop with just over 2 minutes remaining in the game, the unit came through to get the ball back to Ian Book for one final drive. After Notre Dame allowed a quick touchdown in the first overtime period, many were left to wonder how the Irish were ever going to pull this win out. Instead, Clark Lea’s group answered the bell after Kyren Williams’ 2nd touchdown in overtime put the Irish up 47-40. Smelling blood in the water, Ade Ogundeji threw Uiagelelei for 9-yard sack on Clemson’s first play of the drive. On the very next play, Daelin Hayes took Uiagelelei down for a 5-yard sack. On the final 2 plays of the game, the secondary held their ground to end the game.

This importance of this win simply can’t be overstated. After acting as a national punching bag for the past 27 years, Notre Dame finally secured its first win over a #1 ranked team since defeating Bobby Bowden’s Florida State Seminoles in 1993. Not only did they defeat a #1 ranked team, but the Irish defeated Clemson, one of the sports giants. Yes, the Tigers were missing several key pieces on defense and Trevor Lawrence at quarterback. However, let’s not pretend that Dabo Swinney doesn’t have talented players up and down his depth chart.

The win also gives Brian Kelly an avenue to change the narrative surrounding his time in South Bend. The biggest criticism against him has been the inability of his teams to show up when the lights are brightest. After so many near misses, Kelly finally won “the big one.”

To capitalize on this victory, the coaching staff needs to parlay this into several major successes on the recruiting trail. Success on the recruiting trail will lead to more on field success, which will help to create the type of momentum that has catapulted teams like Clemson and Alabama to the mountaintop in college football.

While last night’s game should serve notice to the rest of the country that Notre Dame can run with the big boys in the sport, Kelly has his work cut out for him moving forward. Up next, his team faces Boston College, and Irish fans all remember what happened the last time Notre Dame played the Eagles following a win over a #1 ranked team.

In a little over a month, Clemson and Notre Dame figure to square off again in the ACC Championship on December 19th. It is safe to assume that Clemson Tigers will be back to full strength by that time. That means that Notre Dame can’t afford to lay an egg or else the narrative coming out of the game will become “look what happens when Notre Dame played Clemson at full strength.”

While several obstacles remain, I feel far more confident in Notre Dame’s ability to overcome the challenges in the coming weeks. For now, let’s take today to revel in last night’s victory. Personally, Ian Book’s quote from last night rings true to when he said, “A night I’ll never forget. No matter how old I am, I know I’ll remember this game forever.”