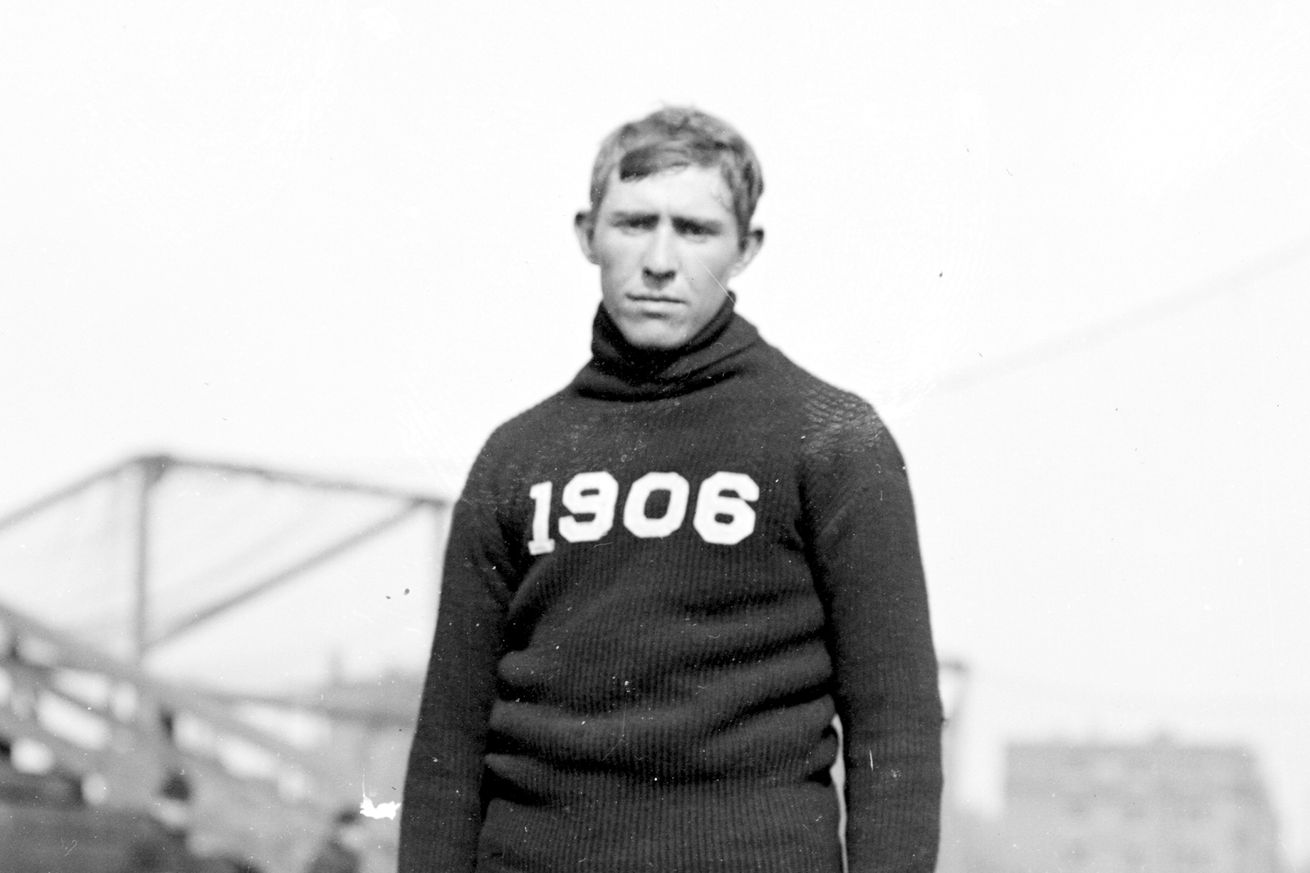 Credit Harper for Turning Notre Dame into a National Brand

Notre Dame Football has one of the richest histories in the sport of college football. Despite not winning a national championship since 1988, the Irish are firmly entrenched as one of the elites in the sport. With that in mind, I wanted to take a look at the top ten greatest head coaches in the history of Irish Football. This will be a ten part series.

Jesse Harper was born and raised in Paw Paw, Illinois as a child. Harper attended the University of Chicago and played football for legendary coach, Amos Alonzo Stagg. Harper learned the value of the forward pass under Stagg, one of the few coaches who employed the novel tactic in the early 1900s. Following his playing career, Harper immediately took a job as the head football coach at Alma College in Michigan. Harper spent two seasons as head coach and finished with an 8-3-4 record. Due to his success, Harper received an offer from Wabash College to become their head football coach. He led Wabash from 1909 until 1912, fashioning a 15-9-2 record. During Harper’s career at Wabash, Notre Dame played the Little Giants three times. In fact, Wabash almost defeated the Irish in 1911, losing by a score of 6-3.

Legend has it that during Harper’s time at Wabash, a local Notre Dame graduate was talking to Harper one day when Harper remarked, “football should be made to pay for itself.” The local graduate was a prominent attorney in the area. The attorney ran into Father Cavanaugh, the president of Notre Dame at the time, and relayed Harper’s thoughts about college football. Cavanaugh was instantly interested in speaking with Harper as Notre Dame’s athletic department had been a financial drain on the school for some time. During their meeting in 1913 Father Cavanaugh offered Harper the chance to become the football, baseball, and basketball head coach. Additionally, Harper was given the title of athletic director, the first in the history of the Notre Dame Fighting Irish.

As athletic director, Harper was in charge of creating his own schedules. This posed quite a challenge for him as teams in the Midwest often refused to play Notre Dame. Some teams were afraid to play the budding powerhouse while others rejected Notre Dame’s offer because they were a Catholic school. Teams from the Western Conference (now the Big Ten) spurned invitations from the Irish to play between 1910 and 1917, mainly as a result of Fielding Yost blackballing the Irish after they defeated Michigan in 1909. Harper was forced to travel nationwide to face quality opponents. In his first year he scheduled road contests against Army, Penn State, and Texas during his first season in 1913. The Irish began the season with an 87-0 annihilation of Ohio Northern. Two more victories put their record at 3-0 and set up a monumental showdown with Army, one of the preeminent programs in the country at the time. Not only did the Irish get to play a great opponent, they also generated revenue for the athletic department by collecting a $1,000 payout for making the trip out east.

Now, prior to this game, college football was largely ruled by teams that ran the ball. However, several rules had been adjusted in 1912 to lessen the restrictions on passing plays. Harper and his nineteen players made it a goal to introduce the forward pass to the entire nation on November 1, 1913. The first quarter began innocently enough with both teams feeling each other out. Late in the first quarter Notre Dame began to flash their aerial dominance. Charles Dorais, the Irish quarterback, lofted a 40 yard touchdown pass to Knute Rockne, a play nearly unheard of in those days. The first quarter came to a close with the Irish up 7-0 and Dorais holding a completion streak of six passes. The Cadets answered back in the second quarter, scoring two touchdowns to take a 13-7 lead. However, Notre answered with a four-play, 85 yard scoring drive. Dorais completed passes of 35 yards, 25 yards, and 20 yards on the drive as the Irish entered halftime up 14-13. At halftime, Harper implored Dorais to keep throwing, figuring it was the best chance the Irish had against the larger Cadets. The third quarter passed without either team scoring. The Irish ran away with the game in the 4th quarter, scoring 21 unanswered points to clinch a 35-13 victory. Dorais completed 14 of 17 passes for 243 yards. With the win, the Irish announced their arrival on the national stage as a football powerhouse and revolutionized the way football was played. The following day, the New York Times commented that the Irish “flashed the most sensational football that has been seen in the East this year.” Harper immediately became a respected coach throughout the nation for his innovation in such an important game.

Notre Dame ended the 1913 season with three more victories, including a 14-7 victory over Penn State and a 30-7 thrashing of Texas. They finished the season with a 7-0 record. To this day, Harper remains the only Irish coach to end his first season with an unblemished record.

Knute Rockne transitioned from the playing field to the sidelines heading into the 1914 season, joining Harper as an assistant coach following his graduation. Despite the coaching prowess on the sidelines that season, the 1914 season was a step down from 1913. Notre Dame won its first two games of the year by a combined score of 159-0 before losing 28-0 to Yale. Two more wins set up another significant contest with Army at West Point. Army was ready for anything following the previous season’s match-up and defeated Notre Dame by the score of 20-7. Notre Dame ended the season with two more wins to finish with a 6-2 record, though they lost to the two best teams they faced.

Despite the disappointing season, Harper put together an extremely tough 1915 schedule, which included road contests against Army, Texas, Rice, and for the first time, Nebraska. Notre Dame again opened the year with two consecutive victories, setting up a showdown in Lincoln between the two powers of the West in college football. Nebraska set an attendance record that day with 8,000 paid fans in the stands. The game itself was a seesaw affair. Notre Dame jumped out to a 13-7 lead in the first half. However, Nebraska answered back in the second half and took a 20-13 lead with a touchdown in the fourth quarter. The Irish put together a final drive in an attempt to force a tie. Notre Dame methodically marched towards the end zone as time was winding down. Miraculously, Dutch Bergman scored on a 10 yard run for Notre Dame as time expired. Unfortunately, Notre Dame missed the extra point and the Cornhuskers escaped with a dramatic 20-19 victory. Notre Dame squeaked by South Dakota 6-0 the following week to get back in the win column. It was then time for the yearly early November trek to West Point. Notre Dame continued its winning ways by defeating the Cadets by the slim margin of 7-0. To finish the season, Harper’s team defeated Creighton 41-0, defeated Texas 36-7, and defeated Rice 55-2 to finish with a 7-1 record. Harper was an extra point away from his second undefeated campaign in three seasons in South Bend. In addition to his on-field success, Harper continued to succeed off the field by scheduling contests around the country and building Notre Dame into a national brand.

The 1916 team that Harper fielded may have been the best of his tenure. The Irish went 8-1, with their lone loss coming at the hands of Army by the score of 30-10. Notre Dame pitched shutouts in their other eight games of the season. Remarkably, the Irish outscored their other eight opponents by the margin of 282-0, though the only notable schools they played were Army, Michigan Agricultural College (Michigan State), and Nebraska. The eight shutouts in one season remains second in the Irish record book, behind only the 1903 team who had nine shutouts in one season.

In what proved to be Harper’s final season, the 1917 Fighting Irish continued their winning ways. Notably, Wisconsin became the first member of the Western Conference to play Notre Dame in 7 years. Following an opening week victory against Kalamazoo, the Irish tied Wisconsin with the score of 0-0, and lost to Nebraska by the score of 7-0. After these two hiccups, Notre Dame won their final five games of the year, including a 7-2 triumph over the rival Army Cadets. On the season, Notre Dame outscored their opponents 141-9. Following the season, Harper resigned from coaching and returned to his property in Kansas to ranch.

Jesse Harper left behind an outstanding legacy at Notre Dame. His innovation as a coach and use of the forward pass helped to put Notre Dame on the map. The 1913 victory over Army is credited with modernizing college football, as well as cementing Notre Dame’s status as one of the elite programs in the sport. Due to many regional teams refusing to play the Irish, Harper truly built Notre Dame into a national brand by traveling throughout the country to play top-tier teams. On the other hand, the scheduling difficulties forced Notre Dame to play several vastly inferior teams every year in order to fill out the schedule. Regardless, over the course of five seasons Harper won 86% of his games. These accomplishments demanded his inclusion on this list.

Stay tuned to find out who ends up at #6 on my list of “Top Ten Greatest Notre Dame Football Head Coaches.” Below are links to the other profiles in the series.