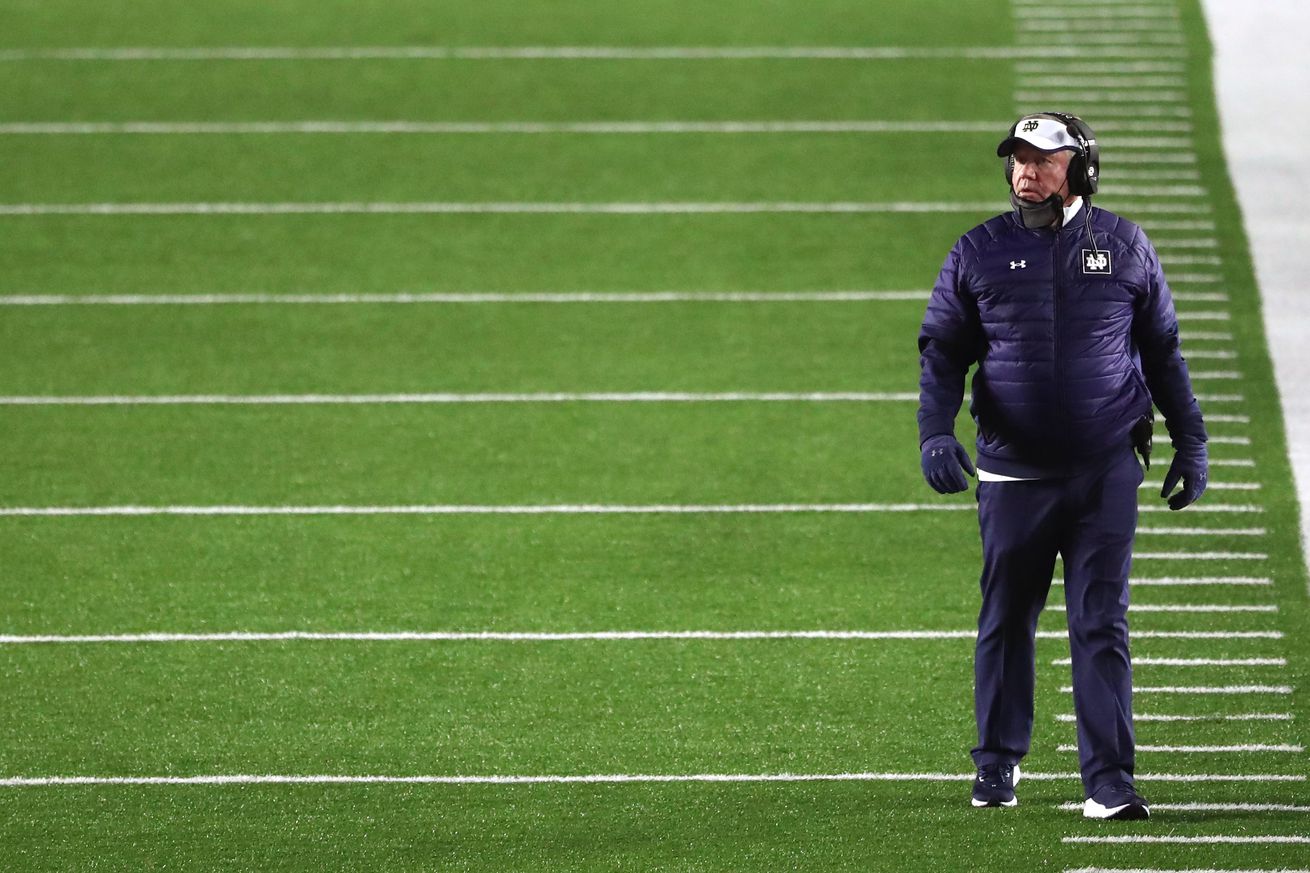 Though the 45-31 score doesn’t indicate it, the Notre Dame Fighting Irish defeated the Boston College Eagles with relative ease yesterday. Fittingly, Brian Kelly notched his 100th career with at Notre Dame while coaching in his home state of Massachusetts. The win moved Kelly into a tie with Lou Holtz for the 2nd most victories ever at Notre Dame, trailing only Knute Rockne’s 105 victories. Depending how the rest of the season plays out, Kelly could conceivably hold the wins record by the end of the season. As an ardent Kelly supporter in the past, I have received plenty of blowback from other fans and friends about my stance on Kelly. However, with the Notre Dame program starting to receive more national respect following their upset over #1 Clemson, I think it behooves us to take a look at how Kelly has gotten Notre Dame to this point over the past several seasons.

Following the 2016 meltdown, Kelly completely revamped his coaching staff by embarking on a nationwide search to fill his empty coordinator positions. Ultimately, he hired Mike Elko away from Wake Forest to become his defensive coordinator, tabbed Chip Long from Memphis to become his offensive coordinator, and installed Brian Polian as his special teams coordinator. Kelly also moved on from long-time strength coach, Paul Longo, bringing in Matt Balis from Connecticut to be his new strength and conditioning coach.

Following a successful 2017 season on the defensive side of the ball, Elko moved on to Texas A&M to fill a similar role. Rather than pursing a splash hire, Kelly elevated Clark Lea from linebackers coach to defensive coordinator. The improvement between the 2016 and 2017 season on defense was night and day. Kelly recognized the unique coaching ability of Clark Lea and felt that Lea would be able to keep the defense on an upward trajectory. The decision proved to be the correct one as the Irish have had one of the best defenses in the country over the past 3 seasons. In fact, Lea has been so successful that it appears to be only a matter of time until another program offers him a head coaching position.

On offense, Chip Long proved to be another great hire. Entrusted with play-calling duties, Long helped the Irish offense in a multitude of ways. Specifically, the 3 seasons under Long saw the team finish with a points per game average in the thirties, which was an improvement over previous seasons. A noticeable improvement also came scoring efficiency in the redzone. However, Notre Dame’s offense struggled against elite competition, and Long’s abrasive personality soon wore thin with players and other staff members. Kelly boldly decided to part ways with Long at the end of the 2019 regular season. Tommy Rees assumed the play-calling role against Iowa State in the Camping World Bowl. In what amounted to a job interview, Rees impressed Kelly enough to receive a promotion from quarterback coach to offensive coordinator. Again, credit Kelly for an outside the box hire by giving the reins to the 28-year old Rees. While it is too early to say definitively, Rees has impressed over his first 8 games. He outsmarted Brent Venables which is no small feat, and his relationship with Ian Book has been credited with an improvement in Book’s play this season.

Lastly, Brian Polian helped to stabilize the special teams unit since his return to South Bend. Polian has also spearheaded the improvement along the recruiting trail and should be credited with the influx of talent the Irish have enjoyed over recent seasons. Matt Balis’ impact may be harder to quantify, but the Irish players are playing with a physicality that has been lacking since Lou Holtz. Near the end of Longo’s tenure, players were noticeably thinner during the stretch run and seemed to fizzle out during the month of November. Thankfully, the same can’t be said under Balis.

A major criticism of Kelly in the past has been his inability to develop quarterbacks, and his penchant for consistently rotating players at the position. In 2017, Kelly rode Brandon Wimbush for the duration of the regular season. The staff highlighted his running ability and were able to squeeze a 9-3 regular season record out of him. Despite his passing limitations, Kelly elected to stick with his signal caller during the season and publically supported his player. However, in the Citrus Bowl, Wimbush’s inefficiencies became too much to overlook. Kelly opted to insert Ian Book at quarterback just before halftime, and Book’s passing abilities helped to key a 21-17 win over LSU.

In 2018, Wimbush began the season as the starting quarterback, and led the team to a 3-0 mark when Kelly decided that he had to make a move at the position. It had become clear to everybody that Wimbush could only take the Irish offense so far despite his 12-3 record as a starter. As a result, Kelly tabbed Book to be his starting quarterback moving forward. There was no waffling the remainder of the season, and Book helped lead the team to a berth in the College Football Playoff. In 2019, fans began to get restless over Book’s play following a loss to Georgia and a humiliating defeat against Michigan. Many labeled the senior quarterback as simply a game manager. Instead of playing musical chairs at the position, Kelly stuck with Book and publically supported him. Book repaid the confidence in him by leading a dramatic comeback win at home against Virginia Tech the week after the Michigan loss. Stunningly, Book has not a game since the ugly performance at Michigan, a streak which now spans 14 games. Despite a slow start to the 2020 season for Book, Kelly again defended his quarterback in public repeatedly citing Book’s ability to win and lead. Over the last 2 weeks, Book has suddenly morphed into a quarterback that appears poised to lead his team to the College Football Playoff and beyond.

For Kelly, long gone are the public outbursts directed at his quarterback. Instead, he has demonstrated a change in his coaching style over the past 3 seasons and seems to be much more positive towards his players. This change in approach has undoubtedly helped the confidence of his quarterbacks and has translated to better success on the field.

Kelly and his teams have been perceived as soft for most of his time in South Bend. Too often under Kelly the Irish would get punched in the mouth by an opponent and not respond. However, over the past 3 seasons that narrative has changed outside of the Miami and Michigan game. More often than not, Kelly’s teams are controlling the lines of scrimmage on both sides of the ball. There is a clear commitment to running the ball on offense and stopping the run on defense. This emphasis has permeated the entire team. An Irish wide receiver is just as likely to throw a nasty block as they are to catch a touchdown pass. Cornerbacks are willing tacklers on the outside. Look no further than last week against Clemson in which the Irish held the Tigers to their lowest rushing output in nearly 10 seasons to highlight the point.

Throughout Notre Dame’s history, coaches have succeeded in South Bend with a physical style of play. Most Irish teams will not “out athlete” the top teams in the country. Thus, Notre Dame must be the aggressor and more physical team in every game they play. Based on the type of schedule that Notre Dame has been playing, this physicality should serve them well moving forward against the ACC, USC, Stanford, and Navy on a yearly basis.

In conclusion, Brian Kelly probably deserves more praise and credit from Irish fans. After finally defeating a Top 5 opponent, the last remaining obstacle for Kelly is to win a national championship. While it isn’t inevitable that he will win a title, the steady climb back “elite” status under Kelly is undeniable. Moving forward, it is my hope that Kelly garners more respect and appreciation for the job that he has done with the Notre Dame program.