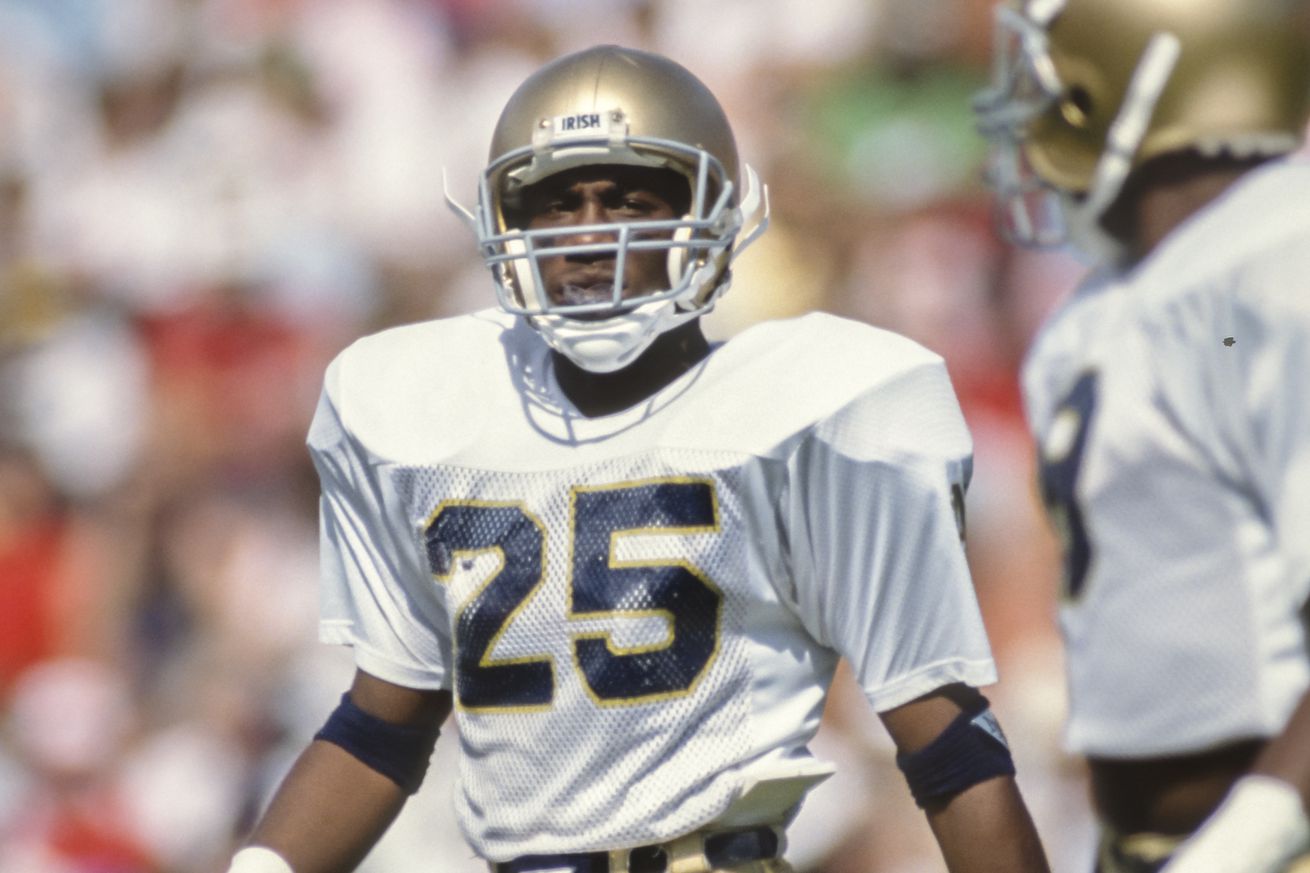 We felt Rocket was going to be something special.

During the football season I try my best to tie in my Throwback Thursday post with the team Notre Dame is facing that week, but no one wants to look back to the 2011 match-up of Notre Dame vs. South Florida. So instead I’m going to use this week’s post to look back at a game that happened this week in Notre Dame history: Notre Dame vs. Michigan game, 1989. Here we go!

On September 16th, 1989, the Notre Dame Fighting Irish football team traveled to Ann Arbor, Michigan, to face the Michigan Wolverines. It was one of the most electrifying single-game performances in Notre Dame history by Raghib “Rocket” Ismail, in which he tied the NCAA record (with himself) by returning two kickoffs for touchdowns. On this rainy afternoon, in front of a crowd of 105,912 screaming fans, Notre Dame came in to Ann Arbor and showed the Wolverines they didn’t need the home field advantage to be victorious.

No opponents had returned a kickoff for a score against the Wolverines in over thirty years (32 to be exact), and Rocket came in to the Big House and did it twice: one from 92 yards out and the other from 88 yards out. “We felt Rocket was going to be something special.” Coach Lou Holtz would recall. “Nobody else did.”

For some further details from the game, the below excerpt is from New York Times writer, Malcolm Moran.

Ismail’s first score, a return at the start of the third quarter and the first touchdown against Michigan on a kickoff in 32 years, provided the Irish with a sudden 14-6 lead after the Wolverines had come within a point 25 seconds before halftime.

His second touchdown, with 12:46 to play in the fourth quarter, blunted an emotional Michigan comeback after the quarterback Elvis Grbac, who entered his first college game as a replacement for the injured starter, Michael Taylor, had brought the Wolverines within 5 points on a 5-yard touchdown pass to the tight end Derrick Walker.

Ismail, a 5-foot-10-inch flanker who has run 40 yards in 4.28 seconds, led the country last season with an average of 36.1 yards per return. He returned two kickoffs for scores last year, both in a 43-point victory over lowly Rice.

Both times, Ismail took advantage of blocks by Rodney Culver, a 6-foot, 219-pound sophomore. He was not forced to break a tackle on the first return, and only briefly felt a Wolverine grab his legs on the second.

Ismail’s 88-yard return was the first for a touchdown against Michigan since Ron Engel of Minnesota ran 95 yards on Oct. 26, 1957. His 92-yard return was believed to be the first time Michigan has allowed two kickoff returns for touchdowns in a game.

Only once, at the end of the first half, did Michigan attempt to keep the ball from Ismail, the lone deep returner, with a low, shorter kickoff. ‘’We thought they were going to do that the whole game,’’ Ismail said.

Michigan’s failure to avoid Ismail, a decision Schembechler said was made to prevent the Irish from easily gaining good field position, will provide the latest debate among the followers of a program that has not been voted national champion since 1948.

The returns provided the Irish with a luxury they needed after a heavy early-afternoon rain left puddles on the artificial surface.

While Rice was the second-leading Irish rusher with 79 yards, including a 24-yard run, a Michigan defense that concentrated on taking away the outside prevented Rice from becoming a decisive factor.

‘’We didn’t do anything special,’’ Holtz said. ‘’With the weather, we did not open it up. We didn’t want to give Michigan anything they didn’t earn.’’