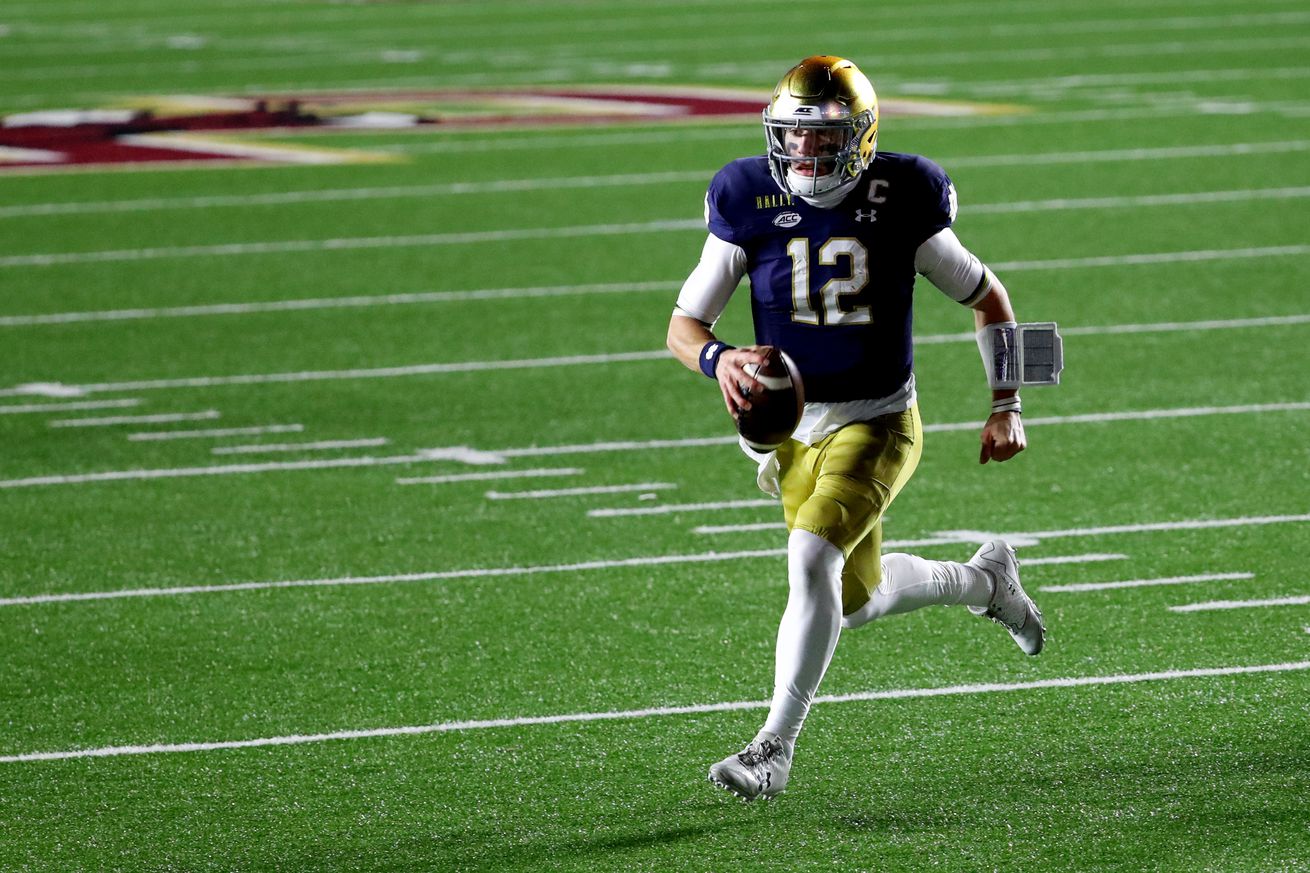 KILL IT WITH FIRE!

By the middle of October, there were two talking points about the Notre Dame Fighting Irish football program that I wanted to toss into the sun with a million nukes. The first was anything to do about the Clemson Tigers — I was just sick and tired of the excessive coverage for months about one game. The other was the weird Irish fan battle concerning Ian Book and Phil Jurkovec.

The Phil Jurkovec saga has been grand and full of bullshit. Phil transferred from Notre Dame to Boston College because he wanted to be a starter this year, and there was no way he was going to pass Ian Book on the depth chart. Normally, that hasn’t been a good enough reason to be granted immediate eligibility — but this is 2020 and the NCAA does the right thing in weird and limited ways.

Notre Dame wasn’t on BC’s schedule until the whole coronavirus/ACC thing happened in August, and yet somehow there was a conspiracy theory going around that Notre Dame (and more specifically Brian Kelly) was somehow blocking Jurkovec from immediate eligibility.

All of it… bullshit. Phil is granted his waiver and away we go.

The season starts rolling along, and those Irish fans that lost their minds when Phil transferred, made sure to keep FULL tabs on what was happening with the Boston College Eagles. While the Irish leaned on the best offensive line in college football to run the ball while a group of inexperienced receivers were brought along, BC and Jurkovec were just tossing bombs left and right.

Ian Book was criticized for not propelling the Irish to having an explosive passing attack while winning every game, and Phil Jurkovec was praised for throwing deep while losing three games. The argument was being made that Phil would have done better in South Bend if Kelly and Ian weren’t meanies and let him be the starter.

The ND/BC game suddenly had a nice big circle on it from some crazy people, like the revelation was going to happen — like Qanaon was real. But then Ian Book went off on the #1 team in the country and gave Notre Dame its biggest win in 27 years. The comparison shopping started to die out, and after Notre Dame’s win over the Eagles, it should be fully dead.

You can also throw in 50 more rushing yards for Ian Book as well as a rushing TD.

Are you still out there Book haters? You wanted to replace Ian Book with Phil Jurkovec because Book wasn’t throwing deep enough times for your taste? Ian Book, the guy who is now 28-3 as a starter, led the Irish to an undefeated regular season in 2018 and a CFB Playoff berth, and is on track to head to the playoffs again — this time with a possible ACC Championship Trophy in hand.

Stop living your life by recruiting rankings and unfulfilled potential, and start using real results. By the way, the Irish are #2 in the country, have the nation’s longest winning streak, haven’t lost at home since September of 2017, and haven’t lost to an unranked team since sometime in 2016.

And if you weren’t already sick of hearing about the Phil Jurkovec situation, ESPN probably took care of that in the first half hour of the broadcast with his Festivus Airing of Grievances.

Ian Book is THE man out there, and has earned every bit of respect possible from his coaches and fellow players. Don’t you think it’s about time he deserves the same type of respect from fans and alumni? Just go ahead and toss those hot takes in the trash and kill them with fire. Notre Dame and Ian Book are legitimately gunning after a national championship — it’s time to jump on board.

Take a screen shot of this text…