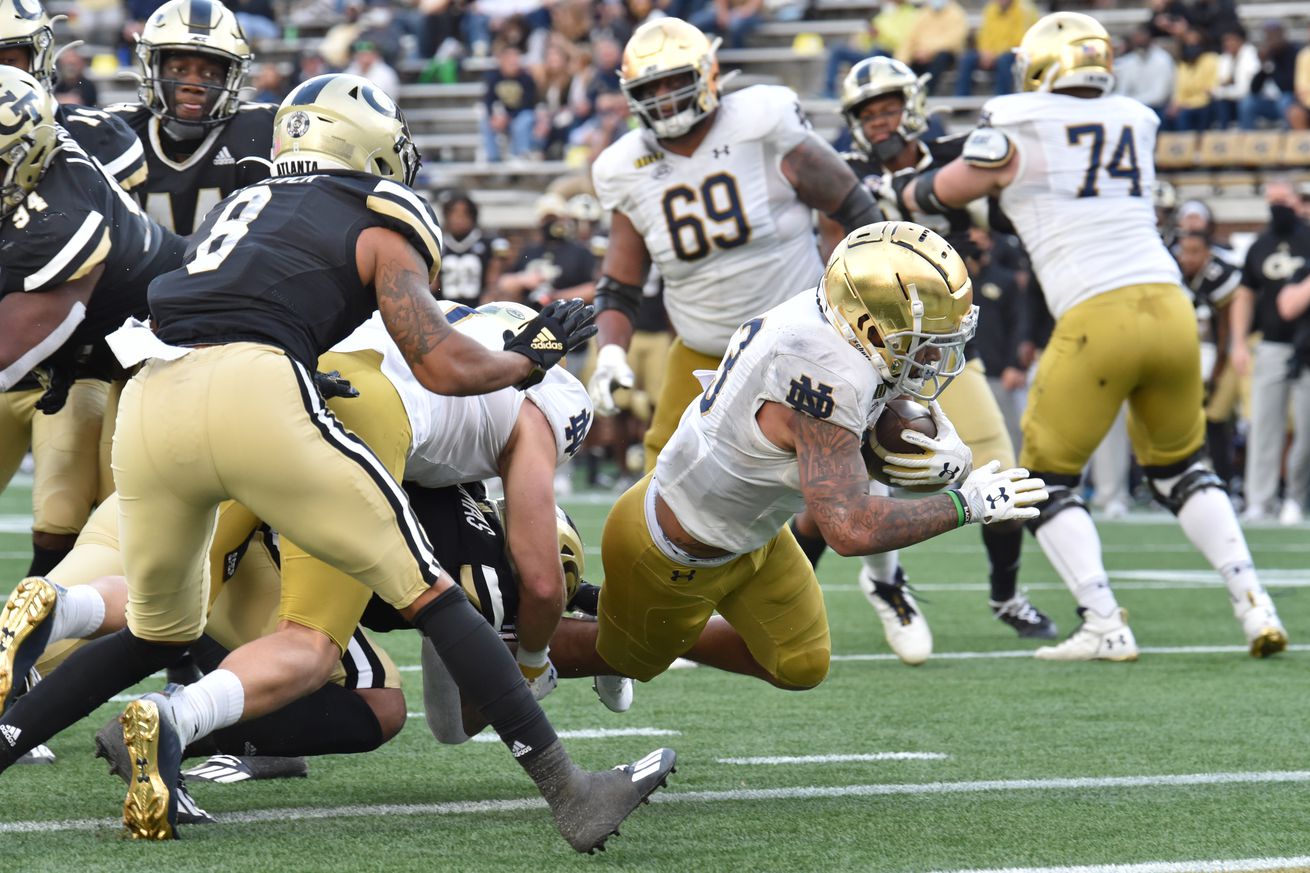 An imperfect, but easy win to set the stage

The Notre Dame Fighting Irish took on the Georgia Tech Yellow Jackets on a lazy Halloween afternoon and, despite a few setbacks, cruised to a not-so-scary 31-13 win in Atlanta. A season-defining matchup with the Clemson Tigers now looms, so let’s take a look at some threads in this very laid-back game that we can follow going forward.

Veterans Set the Tone on Defense

What more can we say about this defense? It was another dominating effort from the Irish, who held Georgia Tech without an offensive point until the fourth quarter. The pass rush beleaguered and battered Jeff Sims, racking up five sacks. Four of those sacks came from captains Daelin Hayes, Adetokunbo Ogundeji and Shaun Crawford, with the first of Hayes’ two strip-sacks on the day recovered by Myron Tagovailoa-Amosa for a back-breaking turnover.

Kyle Hamilton, Jeremiah Owusu-Koramoah and Drew White each played exceptional games as well, setting an intensely competitive tone on a day where going through the motions was a significant risk. With veterans peaking at the right time while young players continue to contribute (Isaiah Foskey added another sack, while Jack Kiser had a solid game after the departure of Marist Liufau), this defense looks poised, aggressive and ready for primetime. Now primetime is here, and they’ll get the opportunity to establish themselves as one of the most dominant units in the country.

Whither The Tight Ends?

One thing I expected to see following injuries and a lack of production from Notre Dame’s playmaking receivers was a greater focus on their promising tight ends group. But while Michael Mayer saw a lot of action on the opening drive, he seemed to disappear from Ian Book’s progressions later on, while Tommy Tremble and Brock Wright each had only one reception for identical totals of 11 yards. It had looked like the Irish were headed toward a big-man-centric passing game against the Pittsburgh Panthers, but Book seemed to not see his big guys on the field against the Yellow Jackets.

Yes, Book tried to find Tremble on an errant pass that would have gone for an Irish touchdown; yes, he established solid connections with Javon McKinley and Avery Davis that helped the offense keep moving. But the Irish tight ends have elite talent that will create matchup nightmares even for Clemson. Book has to be able to find them more consistently.

Overall, The Offense Was Fine

Just fine. Not dominant, not outstanding, but also not bad. It was clear from the outset that Notre Dame came into this game with a ground-and-pound, burn-the-clock strategy focused on protecting the lead and its players’ health rather than racking up as many points as possible. For the most part, they succeeded in executing that strategy. There were a few mistakes that prevented the score from looking more lopsided – in particular the 14-point swing created by the Yellow Jackets’ scoop-and-score touchdown as well as the missed Book-Tremble connection – but it was a perfectly adequate effort in a game where the defense didn’t need a ton of help.

Will this offense be enough to beat the Clemson Tigers next week? Possibly – despite the injuries on the defensive side of the ball for Clemson, the Irish will have to make plays to win as the Tigers aren’t likely to be held without a touchdown. We’ve seen flashes of that playmaking ability over the course of the season, but not yet on a consistent basis.

As a fan who remembers the ceaseless drama and misery of the Weisingdavie era, I’m glad ho-hum, forgettable efforts for the Irish now result in three-possession wins. Winning the big game is the next step, and now the big game is here.