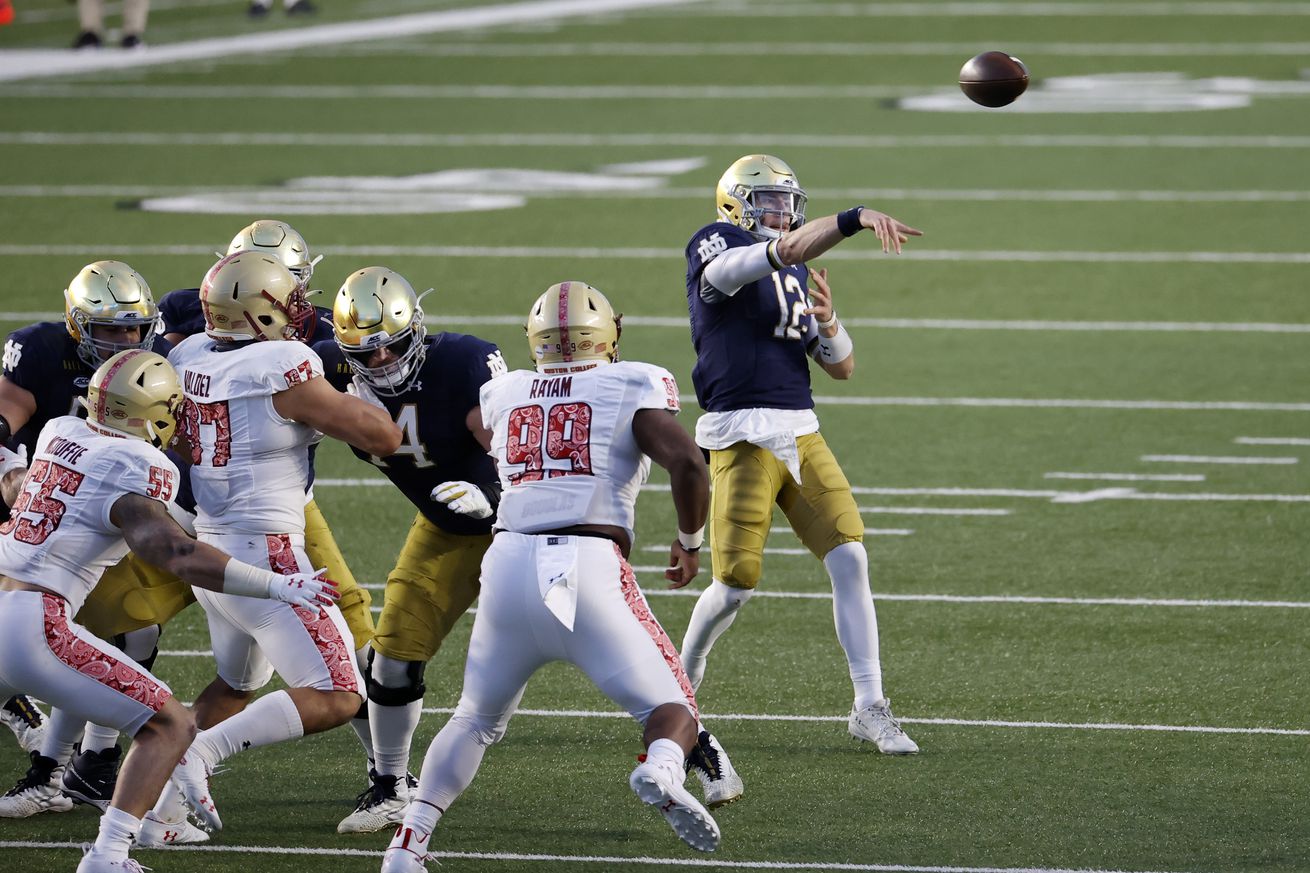 No curses to be found in Chestnut Hill

Friends, your Notre Dame Fighting Irish remain undefeated after handily – albeit sloppily -defeating the Boston College Eagles on the road. Before and during the broadcast, the talk for this game centered on parallels with the two teams’ clash in 1993 and Phil Jurkovec’s quest to prove himself against his former team. Both of these talking points, along with BC’s designation of this matchup as the annual Red Bandana game, were supposedly reasons to have the Irish on upset alert.

And yet, despite a visible Clemson Tigers hangover early in the game, the Irish were able to recover. They vacuumed up those ‘93 ghosts and put them in a secure containment chamber that may or may not be in compliance with the Environmental Protection Act, then slammed the door on the hungry Jurkovec’s bid for a statement. With a bye on deck before a trip down south to take on the up-and-coming North Carolina Tar Heels, let’s take a look at three of the most significant things we noticed as the Irish busted ghosts on Saturday.

This game was the culmination of a long controversy surrounding the merits of Ian Book and Phil Jurkovec at quarterback. Coming out of it, there are two takeaways that should satisfy all the players, teams and fans involved:

On a day where he was once again pressured to prove himself and many of the Irish were sloppy, Ian Book didn’t miss a beat from his heroic performance against Clemson. He made beautiful throws on contested balls, made plays with his legs – both running the ball and extending plays in the passing game – and showed impressive pocket presence throughout the game. With Kyren Williams getting a breather from his own Herculean effort the week prior, this was Book’s game to win, and he did so with poise and efficiency. If he continues this level of play, the Irish have a real shot at a deep postseason run and a national championship.

Watching Jurkovec, I was reminded of Jimmy Clausen circa 2008. The guy’s ability jumps off the screen, but he still makes some serious mistakes (Jurkovec only threw one interception, but it easily could have been four) and will need to continue to learn and grow more disciplined if he wants to maximize that ability. He needs time and space as the #1 guy for that growth to happen. A Notre Dame program with its eye on CFP contention couldn’t give Phil that room, but a rebuilding BC program could. Phil himself said it best after the game: “If anything, this game showed me I’m in the right place.”

The Irish receivers have earned some recognition

Notre Dame’s receiving corps has had a lot of critics over the course of this season, yours truly included. While there are still concerns, in the last few weeks Javon McKinley, Avery Davis and Ben Skowronek have risen to the occasion and been difference-makers in the Irish offense. McKinley followed up his outstanding game against Clemson with another solid outing (5 rec, 48 yards). Get that guy in the end zone soon because he has earned it.

Ben Skowronek did have a fumble on Saturday, but he can be forgiven becasue he spent the rest of the evening harvesting souls from Eagles defensive backs in the red zone. Big Benny Skow straight up out-muscled the Eagles’ secondary on a pair of contested balls, and also made a heads-up connection with a scrambling Book to account for a third touchdown on the day. After a slow start to his season, Skowronek has come on strong and proved himself to be the player Notre Dame’s coaches expected when he transferred.

Avery Davis only had two receptions, but each made a major impact – the second being a 48-yard gain that set up first-and-goal for the Irish. Davis has established himself as the speed threat in the Irish offense in the absence of Braden Lenzy, providing a dimension that was desperately needed. On a night where the commentators couldn’t start talking about an Irish quarterback recruit who left town when he didn’t get playing time, Davis deserves recognition for his patience, commitment and perseverance, for which he is now reaping a much-deserved reward.

So does BC grease the football or what?

Speaking of Skowronek’s fumble, this game featured a handful of ugly miscues by both teams. In addition to Chris Tyree and Kyren Williams each coughing up the ball, Kyle Hamilton also bobbled a gimme interception, Isaiah Pryor missed an easy opportunity to take the Eagles’ onside attempt to the house and Jack Kiser fumbled – and thankfully recovered – the ball immediately after picking it off. Meanwhile, the Eagles’ first-half upset bid unraveled after a snap flew past Jurkovec and was recovered by Daelin Hayes, setting up an Irish touchdown and an insurmountable two-possession lead.

Some sloppiness was to be expected in this game, which not only followed an immensely emotional victory but also led into a bye week. I don’t think Irish fans have a whole lot to be worried about here in the long term here; it’s more that ironing out some of those kinks could have made more of a statement on the scoreboard. However, with all the juju heading into this game and a powerful statement already having been made the week prior, all that was needed this week was a W – and the Irish cruised to it.