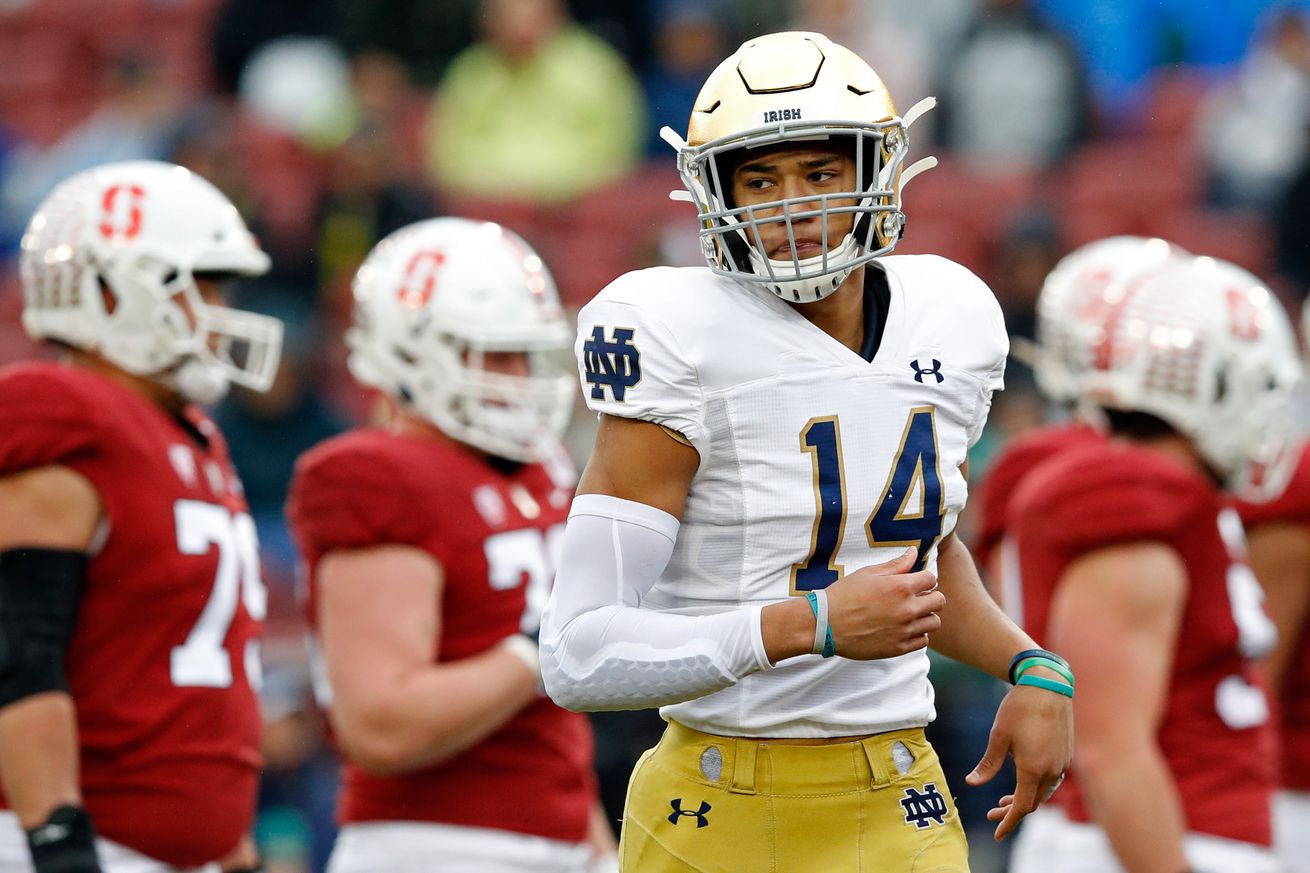 It’s not that often that Notre Dame brings in a 5-star prospect on the defensive side of the ball, and that especially doesn’t seem to occur very often at the safety position. But when Kyle Hamilton came to South Bend in the fall of 2019, the Irish were getting a certified stud who had ALL the hype and early expectations coming in, even with two entrenched senior starters at his position.

Early in 2018, Hamilton was a low 3-star prospect who wasn’t even ranked in the Top 1000 prospects by some services, not really making any blue bloods’ radars while they focused on finishing up their 2018 classes and building relationships with the blue-chippers in the 2019 class. Even after Hamilton had a very good Army All-American Bowl Underclassmen Combine, he wasn’t necessarily receiving tons of attention as a top recruit.

However, soon scouts and coaches and talent evaluators from the ratings services began to watch his tape and see him perform at more and more camps, and his elite size, athleticism, and instincts all suddenly became obvious. Within a month of 2018 National Signing Day in February, Hamilton began seeing interest pour in from the elite of the elite programs across the country: Ohio State, Clemson, Georgia, LSU, Auburn, Notre Dame, Michigan, and others all were suddenly offering the 6’3”, 190-pound safety from Atlanta, and many more top schools would soon follow suit.

Hamilton visited a few schools before committing to ND in late April, and then continued attending camps that summer as he saw his stock SKYROCKET — especially after the 2018 The Opening Finals, where he was dominant — from then until National Signing Day in December.

In case you don’t follow recruiting closely, it isn’t typically the case for a guy who commits to Notre Dame early as a 3-star to have his ratings boosted so much post-commitment, but Hamilton jumped 212 spots in the 247sports rankings to be in their Top 200, and then in the fall of 2018, after a few weeks of his senior season, Hamilton was pumped up even further, given the #22 overall ranking in the 2019 class by 247sports.

He would finish in their rankings as the 15th-best recruit in the country, earning him a 5th star and seeing his overall composite ranking jump up to #60 in the nation as the other services also bumped him up a bit.

So, with that meteoric rise from no-name recruit to being the most elite and game-ready defensive prospect ND had signed since Jaylon Smith, many ND fans would not have been surprised to see the hype fall flat a bit considering true freshmen take time to develop and adjust to the speed of the game, Hamilton had senior captains ahead of him on the depth chart, etc.

Hamilton, though, was simply too good to keep off the field in 2019, and although obviously he didn’t earn a starting role over Alohi Gilman or Jalen Elliott, he DID end up 1st on the team in interceptions (4, including his first being a pick-six in his first home game), tied for 2nd in passes defended (6), and 7th on the team in tackles (41). He displayed unreal athleticism and instincts and closing speed, was fearless in flying to the ball to make big hits and bring down ball carriers in space, and truly looked the part of the 5-star safety he was built up to be.

Greg Flammang, Writer at UHND.com and President of the Kyle Hamilton Fan Club

Look, I could have come up with a solid spirit animal for Kyle Hamilton, but no one has a greater affinity for our beautiful son Kyle than Greg, whom you can follow @greg2126 for all his glorious Kyle-related takes (plus a lot of other exceptional ND content).

So, I’m naming Greg my honorary choice for Kyle’s spirit animal, and will now turn it over to him to officially announce Kyle’s actual spirit animal. Greg, you have the floor.

Unicorns are described as mythical creatures, animals that are often talked about, but never actually seen. Kyle Hamilton reached mythical status last fall when word of his athletic exploits got passed around during the opening of fall practices. In his first practice, he intercepted three passes. In the next practice open to the media, he intercepted two more. As fall camp progressed, the speculation started as to how many he had in all practices. Was it 10? Could it possibly be more? (The unconfirmed number settled at 15.)

In keeping with the mythical nature of this, we’ve never actually seen any of these interceptions, but everyone believed it to be true. By the time the games started, anything was possible. And he amazingly lived up to the hype. He led the team in interceptions, returned his first pick for a touchdown in his first game in Notre Dame Stadium. He delivered massive hits, broke up passes, if he gave up a reception it was seen as a disaster. Not since Bobby Taylor in 1994 have we seen someone so tall move so fluidly, with such great ball skills.

And for good measure, Kyle sported mane like curly hair on his head, like a true unicorn would.

This is one of the easiest 2020 outlooks to write up, because I don’t think a single soul will disagree with me here: Kyle Hamilton will be a starting safety in 2020, either alongside Houston Griffith or Ohio State grad transfer Isaiah Pryor, and Hamilton will likely be the best player on the defense this coming season (only Jeremiah Owusu-Koramoah has a true shot at contesting him for that title, in my opinion).

Hamilton’s stats will look even gaudier with the increased playing time — especially tackles and passes defended. I think he’s such a good ball hawk with such great closing speed and ball skills that he’ll match his 2019 interceptions total. Hell, he could improve on it by a couple picks and I wouldn’t be too shocked — would you?

Kyle Hamilton will be a STAR next season, may even push for some All-American honors depending on how the team does, and will set himself up for an All-American caliber junior season that’s so good, he’ll be unable to justify remaining at ND for his senior year and will instead be a 1st Round pick in the 2022 NFL Draft.