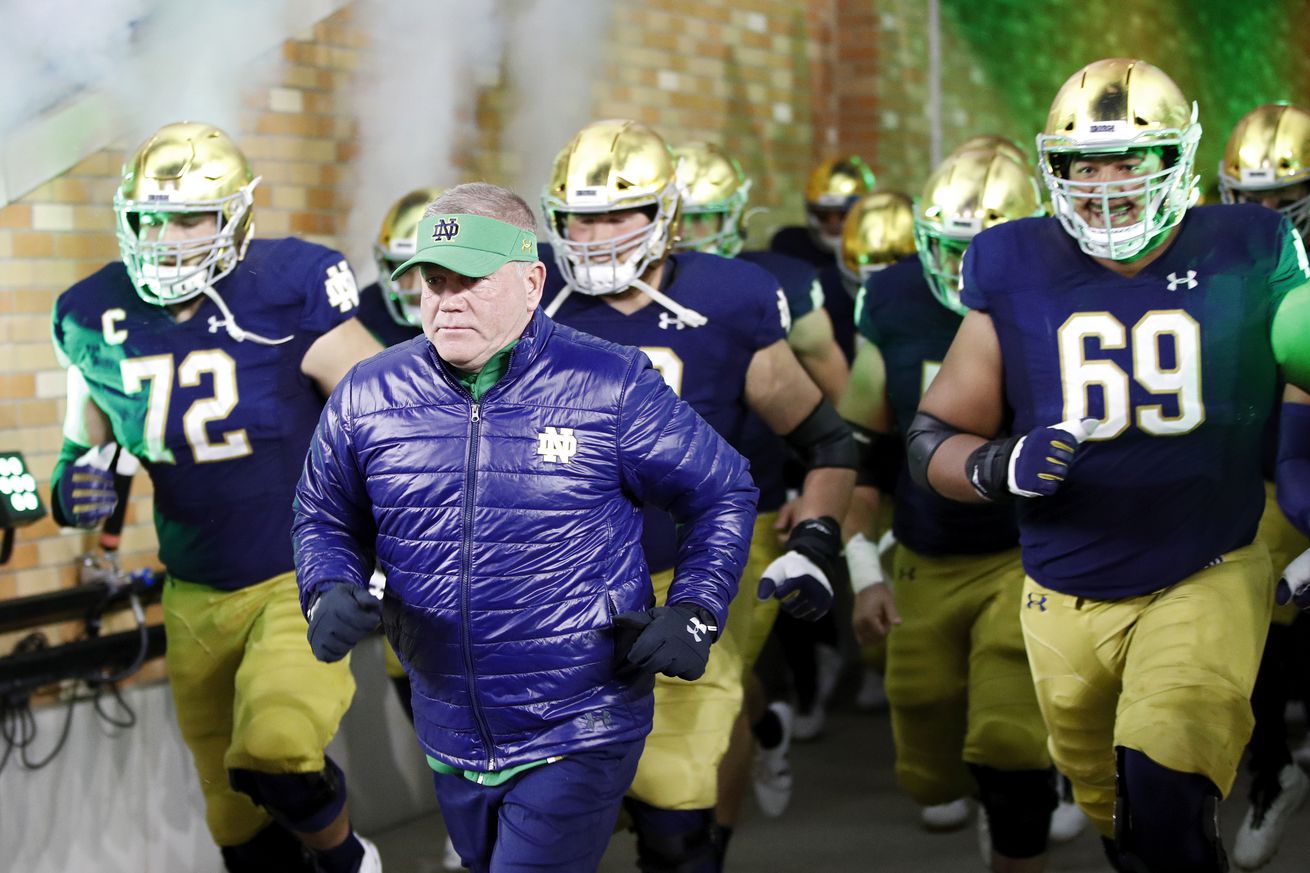 Just like in the movies, every football season tells a story. Some are pulse-pounding thrillers; some are epic adventures; some are wacky misadventures that don’t make sense; some are tragedies. In either case, the story can be told well, or told poorly.

Followers of Irish football have seen a variety of these stories in recent years. Which ones were they? That’s what we’ll dive into today as we explore which movie defined each recent season for Notre Dame football.

To give this exercise a reasonable scope, we’re limiting it to the last decade of Irish football. To challenge ourselves, we’re also going to restrict our choices to movies released in the same year as the season in question. Forget the Oscars; for Notre Dame fans, these were the movies that really defined the year. We’re going to give each of these films a Shamrock Award, or in Hollywood-speak, a “Shammy.” Hopefully this will help you find some movies to watch (or avoid, depending on which season they are associated with) as you social-distance yourself.

Jeff Bridges, Matt Damon and Josh Brolin starred in this remake of a John Wayne classic that ended up being one of the best Westerns in recent memory. It’s an intimate, messy, and brutal small-scale drama about revenge, redemption, and honor. It shows flawed heroes struggling to do the right thing in a harsh, unforgiving world.

Those themes would be familiar to members of this Irish team, which looked dead in the water at 4-5, having endured a campus-wide tragedy and a string of horrendous losses on the field. “True Grit” is exactly what they showed, rallying late in the season to finish 8-5. While they didn’t win any titles, the heart they showed was worthy of remembrance.

A ragtag group of buddies who barely survived their last bout of bachelor-party shenanigans decide to do the same thing all over again, for reasons that are unclear to everyone involved except the studio executives. Aside from some more extreme humor and a different location, this raunchy sequel was virtually the same as its predecessor – but far less satisfying. Viewers found themselves asking: “Why do I have to watch the same exact story happen, just in a less fun and even more cringe-inducing way?”

Why, indeed, asked fans of the 2011 Irish, who took a comically insane journey to end up in the exact same place as the previous year, with purple-complected screaming and goal-line fumbles standing in for face tattoos and Thai prostitutes. What’s more, it had none of the previous installment’s good feelings or redemptive qualities; it was just a bizarre, ludicrous bad trip that left us begging for someone to change the script.

An awesome, action-packed movie that reinvigorated one of cinema’s oldest franchises, Skyfall was the best Bond film since the Connery era. There were few dull moments in this masterfully directed thriller, which built tension all the way to up to a violent and heartbreaking (but still hopeful) conclusion.

Like 007, the 2012 Irish reemerged after being presumed dead, navigating masterfully and sometimes miraculously from one narrow escape to another in a non-stop thrill ride that eventually came to a bloody, fiery end.

Fun personal aside: 2012 was my freshman year, and directly after attending the Senior Day game against the Wake Forest Demon Deacons, I went with my family and a couple buddies to see Skyfall. At the end of the film we came out of the theater, turned our phones back on and received a barrage of texts and alerts telling us the Kansas State Wildcats and Oregon Ducks had fallen and the Irish were now #1, then met up with our friends to celebrate. Remember going out and doing things? That was awesome.

Iron Man 3 wasn’t bad by any means. It was the sort of ho-hum, enjoyable-but-forgettable popcorn flick that makes tons of money at the box office, but you and I both know we won’t care if we never see it again. What made it a big disappointment was the fact that it followed The Avengers, an incredibly fun movie that left open a ton of creative possibilities. Marvel could have gone any number of exciting directions, so it was frustrating that what they went with was so…meh.

Similarly, the 2013 season for Notre Dame was not terrible by objective standards; at 9-4, the 2013 Irish were Brian Kelly’s second-best team at the time. But as a followup to the beloved 2012 season it was a big-time letdown, and felt like a regression back to a depressing mean.

I’m going to be honest here: I haven’t seen this movie. From what I know about the Purge franchise, it depicts a dystopian society that appears to be beautiful and functioning well on the surface, but descends into bloody mayhem when laws are suspended for one night a year. This particular entry seems to focus on society-wide horror and carnage more than the first film, which followed an individual family.

That makes it a perfect companion to the 2014 season, which looked great at first before abruptly unraveling into a chaotic horror show, with Brian VanGorder’s defense as toothless and exposed as the laws of society in the Purge-verse. Unlike the grim vision of this movie, however, this season ended on a note of hope, with the Irish getting a redemptive win over LSU in the Music City Bowl.

Star Wars was back, baby, and it looked great. It wasn’t perfect, but this first entry in Disney’s new trilogy was the best Star Wars movie anyone had seen this century. With a cast of fun new heroes alongside trusted, beloved veterans, this movie was a ton of fun and had us all excited for what was going to come next. Unfortunately, what did come next was a terrible sequel (fight me) that made this perfectly good movie look worse by association.

2015 also saw the resurrection of a classic brand in college football, with Notre Dame returning what likely is still its most talented team of the modern era. Newcomers like DeShone Kizer and Josh Adams played alongside veterans like Jaylon Smith, Will Fuller and Ronnie Stanley. Although they came short of the College Football Playoff, this team had a great year and left us excited for what was to come. But as with The Force Awakens, the followup was such a disappointment that it made us reconsider whether this team really was as good as we remembered.

With a cool concept and talented cast, this had the potential to at least be a fun movie, if not a great one. What we got instead was a wretched, atrociously executed trainwreck that made no sense and tortured everyone who watched it.

This third entry in the Thor series sees the titular hero, stripped of his hammer, his power and his dignity, forced to fight his way back and save his kingdom in an uplifting and often hilarious action-comedy. While it was never going to win any awards, this movie was a joy to watch.

The Notre Dame football program had to undergo a similar journey in 2017, having been laid low and stripped of its prestige the year before. They did so in highly entertaining fashion, with Brandon Wimbush and Josh Adams running wild behind an offensive line that was essentially a football equivalent of the Incredible Hulk. While there were certainly some flaws and low moments (Miami), the high points (49-14) and jokes (THAT’S A MEGAPHONE) were the parts that stayed with you.

This brilliantly executed, action-packed epic brought together the entire Marvel Cinematic Universe in a quest to prevent the villain Thanos from completing his quest to destroy half of all life in the universe. Fighting valiantly and desperately, the heroes pull off one incredible feat after another and never give up, but are ultimately defeated when they come face-to-face with an enemy too powerful to stop.

The 2018 season for Notre Dame also saw a heroic effort by the Irish, who achieved a perfect regular season before running into an unstoppable opponent in Clemson. Although it was brutal to watch the Irish fail so completely in their first playoff appearance, they still deserved a ton of respect for what they had to do to even get there in the first place.

A gritty, up-close look at combat and survival during World War I, this Oscar-nominated epic follows two young soldiers tasked with relaying a vital message amid the chaotic landscape of trench warfare. Although they face great danger and unimaginable horrors, the two soldiers dutifully persevere to save their comrades.

The 2019 Irish also took their fair share of lumps along the way, most notably a devastating blowout loss at Michigan. But in that dark moment, rather than turn back or shrink from the challenges they faced, they soldiered on and fought their way to an 11-2 record. It was gritty and unglamorous and it went unrecognized by the powers that be, but it was undoubtedly brave and worthy of appreciation.

Have any other ideas or suggestions? Better movie pairings that are outside the same-year rule? Leave them in the comments!