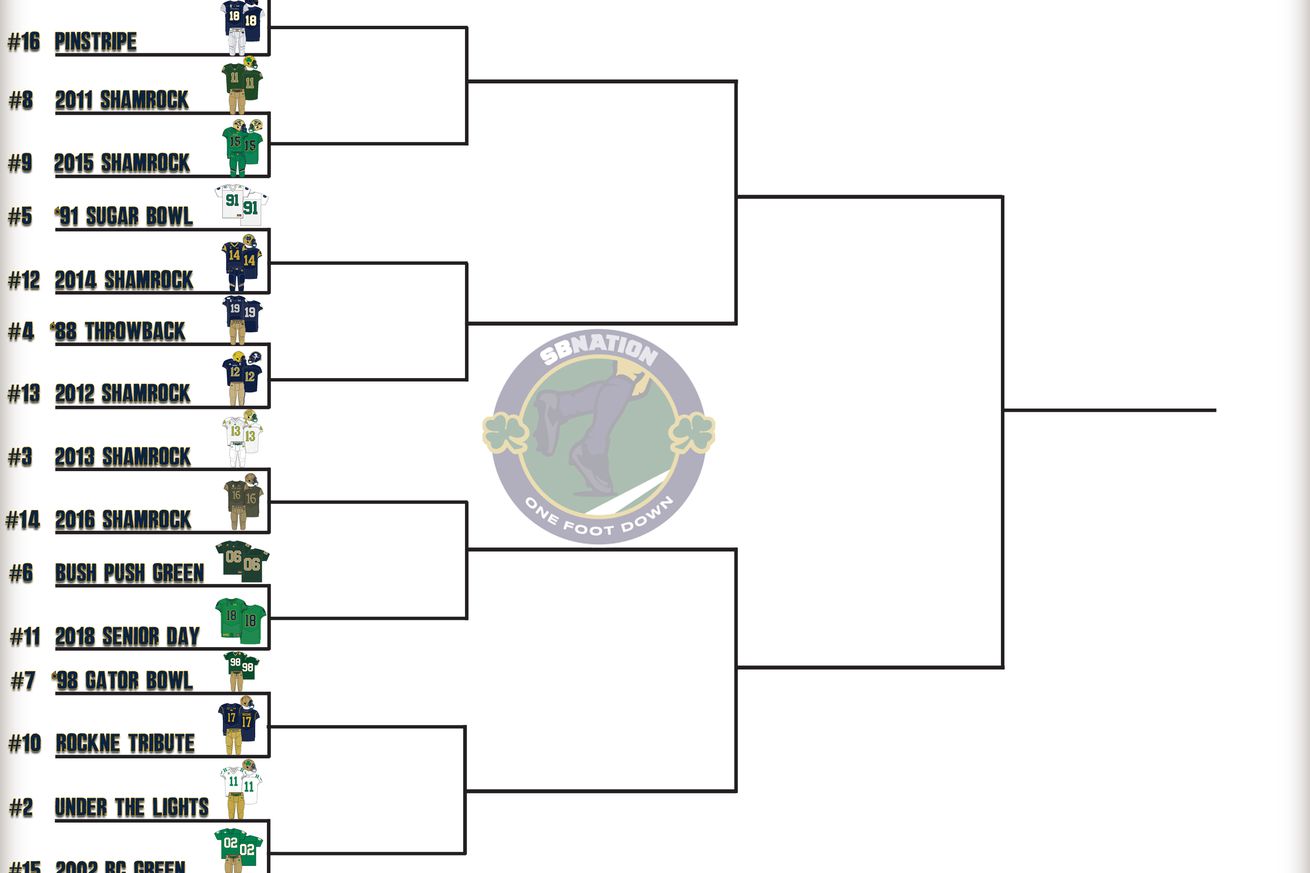 Which uniform is the best version of cool?

The whole “no sports” thing is going to be a thing for quite a bit. That means June content suddenly becomes April content. HOORAY FOR US!

Despite the Notre Dame Fighting Irish being known as a “traditional” school when it comes to their football program, they’ve been known to show a little skin now and then and make things more sultry in the bedroom a little more interesting on the football field.

Of course we’re talking about alternate uniforms because that’s what the title of this post is silly. We’re going to do a definitive fan vote in a 16-uniform field. The champion is the champion and that’s that — no take backs you guys.

Each round will consist of a 24 hour vote right here on OFD. Once the voting is over, I’ll set up the next round. We want to get through this in 4 days — maybe 5.

The 2007 Throwbacks get the top seed because of their absolute greatness from top to bottom.

The 2018 Pinstripe uniforms get the 16 seed for one reason only — to get pummeled by greatness.

If only the Irish would have been able to pull off a win on those 2011 Under the Lights unis… you’d see them a lot more on fans. The fact is, is that they’re beautiful.

The 2002 green uniforms were unnecessary and also produced a loss. They’re not ugly, but should probably be killed with fire.

The 2013 Shamrock Series uniforms were a gorgeous version, and an excellent use of the color white.

The 2016 Shamrock Series uniforms honored the connection between the school and the academies and even had a wee bit of camo with its accessories.

In 2012 Notre Dame rolled out their first REAL alternate uniform ever, and it too had some people weeping.

2014 was Under Armour’s first crack at the Shamrock Series, and they came out swinging.

In 2005 Charlie Weis tried the green jersey trick against the USC Trojans. It didn’t work — but they looked good losing (see what I did there?).

In 2018, Notre Dame brought out the green jerseys for their game against Florida State. It’s a solid look if you weren’t sitting in the press box trying to see a number.

Bob Davie thought the green uniforms would help the Irish in the Gator Bowl against Georgia Tech. They didn’t — but the hunter green and white numbers looked nice.

Without a Shamrock Series game in 2017, Notre Dame and Under Armour paid homage to Knute Rockne, and even had brown leather cleats.

In 2011 Notre Dame finally gave these neutral site games a name (Shamrock Series) and labeled this as III. It was the first time they did something different with the helmet but used those loved hunter and gold unis.

If you ever wondered what an all-green uniform would look like for ND — or what winning a game against BC while wearing green would feel like — the 2015 Shamrock Series unis had you covered.