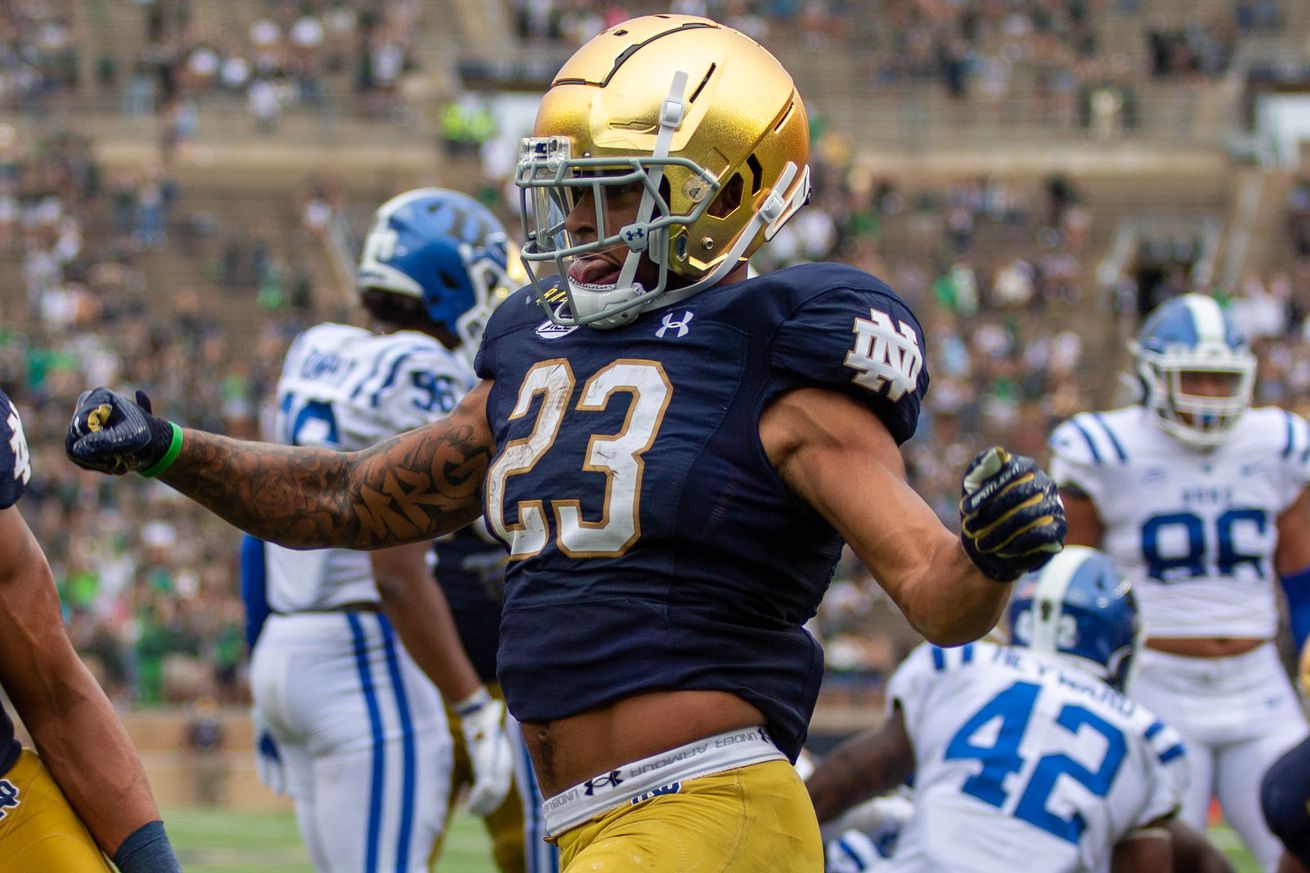 Well, folks, it’s officially October, and we all know what that means — the Notre Dame Fighting Irish football team has, like every other year at this time, reached that crucial point in the season of having completed two-elevenths of their games.

The Irish struggled to find their footing against the Duke Blue Devils in the opener before eventually putting their opponent away by a couple touchdowns, and then they came much more ready to play against a bad South Florida Bulls team in the second game, crushing them 52 to nothing.

Sitting at 2-0 as a top-10 team, it made complete sense that this ND team decided it’d earned a nice, long double-bye, postponing Game 3 with the Wake Forest Demon Deacons until December due to some pesky little virus that probably won’t impact anything else the rest of the season, I’m sure.

So, as we prepare to enjoy another Saturday of watching wacky and wild college football without the stress of worrying about our Irish coming up short, it’s time we looked back at the first 18% of this very weird season and assess Notre Dame’s performance to-date.

Despite the fact they’ve only played two games, there are a number of things we can take away from this first month of ND football, from Lance Taylor’s strong start as Run Game Coordinator, to the offense’s lack of essentially any wide receiver production, to emerging contributors on defense like Isaiah Foskey, Jack Kiser, and Clarence Lewis.

However, I’m gonna have to go with my gut here and argue that one player’s emergence has been most important and most impressive thus far — sophomore running back Kyren “Bellyman” Williams.

But before we look at his statistical prowess so far, it’s important that I explain why I’m giving Kyren Williams the John “John Mutton” Mooney treatment. Let’s talk about “Bellyman.”

There’s very little to it, to be honest. It just sort of happened.

It was opening day for the Irish, and I was at my friend Prison Mike’s place, as I had just previously suckered him into letting me come over to watch the game, because the majority of our other Notre Dame friends either made up excuses about “work” or literally left town so that they wouldn’t have to spend time with me.

Like a lot of other folks, Prison Mike and I had heard about how Kyren Williams had impressed in practices and earned the starting running back spot, but both of us were honestly more expecting that news to mean that there would be no clear answer at the position until 5-star freshman Chris Tyree eventually took over the feature back role later in the year.

So, it was with great surprise that we both found ourselves praising Williams’ ability to turn losses into modest gains and modest gains into first down conversions, using his low center of gravity, quickness, and toughness to wiggle and juke and grit his way into the second level of the defense time and again, while the rest of the offense looked quite unimpressive.

Kyren’s first-game performance itself wasn’t the only thing we noticed and began commenting on, though. Being the weirdos we are who fixate on ridiculous things, we of course immediately made note of the manner in which Williams wore his jersey, looking very Ezekiel Elliott-esque with the front of his jersey rolled up to reveal his midriff.

This wasn’t a one-time, accidental type of thing. Off-season photos can help us confirm Kyren’s been planning this for a while now.

It thus became incredibly clear that Williams is wearing his jersey this way on purpose, and considering he kept making big play after big play with his bare belly beholden to the world, it also quickly became obvious that he’s deriving all of his power from his belly, like Bow Wow with his sneakers in Like Mike or Samson with his hair in The Bible.*

*Pat Rick Note: These are the two best examples of what I’m trying to talk about here and you cannot tell me otherwise.

The evidence was all around us in that coming-out party against Duke. During any positive play involving Williams, his belly was right there in front of him, leading the charge.

Sophomore Kyren Williams from St. Louis, MO twists and turns his way into the end zone for the first #Irish TD of the season! ☘️ pic.twitter.com/UhRy6v7llE

Notre Dame sophomore Kyren Williams was named the ACC Running Back of the Week. One of the perks that comes with being in a conference! #GoIrishhttps://t.co/tGVLuzNd9P

Ian Book’s pass is intercepted on the next play. This is fun we’re having fun. pic.twitter.com/JYu0WscNmk

Hell, even Williams’ teammates were inspired by it, hoping to dig deep and discover their own powers from baring their bellies. It appears to have worked for some:

As this introduction to Kyren’s secret powers unfolded, it was very quickly decided — thanks to Prison Mike’s without-thinking commentary on a nice Williams run late in the first half — that our new favorite player needed a great nickname to reflect his stomach-showing skills.

@MikeFre57170671 called Kyren Williams “Bellyman” during the first half and therefore I would like to officially announce that that is his official nickname. Thank you for your time.

“Bellyman” was a nickname that made me laugh out loud the first time I heard it. It’s so simple and stupid-sounding at first, that you can’t help but chuckle.

But the more we said it to each other, the more we loved it, and we all know the simplest and stupidest nicknames are often the best. John Mutton, John “Johnny G” Goodman, Steve “White Steve” Vasturia…it’s all gold.

So, the legend of Bellyman was suddenly born, and if I have anything to say about it over the next 3-4 years of his Irish career, this inane nickname will stick and catch on with at least a couple of our Twitter followers at One Foot Down.

You can count on it, and honestly we should celebrate it.

Can we get that dance tutorial @Kyrenwilliams23? #GoIrish x #Rally pic.twitter.com/S1aFbXLmtw

Bellyman Is Way More Than Just His Belly, Though

Yeah, I love this nickname and Bellyman’s propensity for not having his jersey cover his stomach because it looks goofy as hell, but his actual performance has been downright spectacular through the first two real games of his career and needs to be discussed accordingly.

Against the Blue Devils, Bellyman absolutely TORE IT UP while the rest of the offense mostly sputtered. He ran for 112 yards and 2 touchdowns on just 19 carries, and decided to toss in 2 catches for 93 yards through the air, driven by a beautiful 75-yard reception that helped cement him as the team’s leading receiver that day by 50 yards.

The following weekend, Bellyman received just over half of the carries he got against Duke, primarily just because the Irish blew South Florida’s doors off and the ball got shared around to the whole running back crew because of that. C’Bo Flemister led the team with 127 yards and a TD on 13 carries, and Tyree picked up 65 yards and a TD on the 8 carries he was granted.

Still, Bellyman ran for a very solid 62 yards on 10 carries while adding a couple more receptions, meaning that through two games — well, in all actuality, just a little over 6 quarters of action — he’s accounted for 277 total yards, 2 touchdowns, and a 6 yards-per-carry average while also standing second on the team in receiving, just 1 yard behind team leader Tommy Tremble.

That 277-yard total is nearly one-third of the Notre Dame offense’s total production this year (see the sweet pie chart below), driving the Irish’s current ranking of #14 in the country in both rushing yards per game and yards per carry.

Individually, his numbers are good enough to make him top-15 in all-purpose yards and top-30 in rushing yards in the entire country, despite playing one fewer game than at least a few other players high on those lists.

And sure, the Duke defense isn’t exactly elite, and we all know South Florida is one of the worst teams in the country in their first season after firing Charlie Strong. But after an off-season where most talk about the running back position centered around whether Tyree would be ready to be RB1 or if Jafar Armstrong could stay healthy or if Ian Book would have to carry the offense, the emergence of Kyren “Bellyman” Williams has been a wonderfully positive development.

And call me crazy, but I think it’s because of that belly. The stats speak for themselves.

But before you do that, please note that, according to a recent fan email I received about my love of talking about great college football names, this content is “childish the first time around” and then “just plain dumb and annoying” after that. You have been warned.