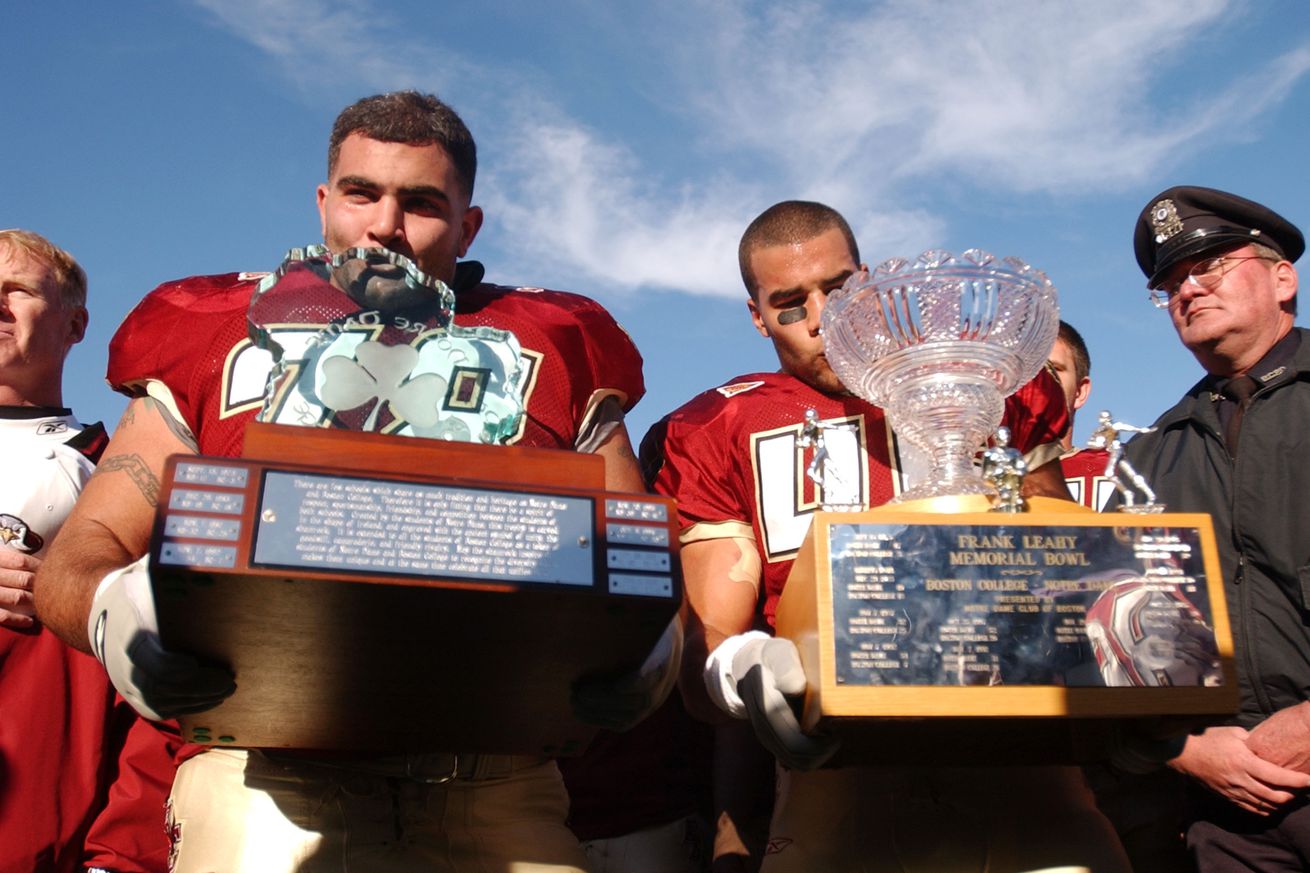 Both Catholic schools wanted a game, but didn’t actually pull it off until 1975.

The Notre Dame Fighting Irish and Boston College Eagles are expected to meet for the 26th time this season, resuming their “Holy War” two years earlier than anticipated.

Despite their similarities, the two teams didn’t meet for the first time until 1975. The Irish lead the series, 16-9, and are victors in the last seven matchups.

“A BC-Notre Dame game has been in the works longer than people realize,” Notre Dame Athletic Director Edward “Moose” Krause told The Boston Globe in July 1973. “The late Frank Leahy, who coached at both schools, was after me for years to set one up and I couldn’t. We scheduled so far in advance it was impossible.”

Bill Flynn, then BC’s athletic director, first broached the possibility of a game between the two Catholic schools in 1963, according to Krause.

Then two things happened in the early 1970s to make this game a reality.

The first was the opening of 60,292-seat Schaefer Stadium in Foxborough, Mass., which housed the New England Patriots from 1971 to 2002. The second was new NCAA flexibility, which permitted 11-game regular season schedules.

“The administration gave us permission to play that extra grame in 1974, so Bill and I got together. And now I know we’ll please thousands of people,” said Krause.

Flynn said his office fielded numerous calls after the two universities announced the game on July 23, 1973.

“I talked to one man from the North Shore who is 57,” the athletic director told The Globe. “He explained how he was a Notre Dame fan all his life and never saw the team play. He actually cried and wanted me to make sure to save him a ticket.” The Irish hadn’t been to New England since 1944, when Lynn native Frank “Boley” Dancewicz led Notre Dame in a 64-0 romp over the Dartmouth Indians at Fenway Park.

Flynn added: “It’s doubtful if we could have got them without Schaefer Stadium. Alumni Stadium is 32,000, not large enough for a team like that. We like to play our games on the campus, but for Notre Dame we were willing to make an exception.” (Indeed, the Irish didn’t play in Chestnut Hill until capacity was expanded to 44,500 in 1994.)

“Ended is the claim that Notre Dame would not play a Jesuit rival,” wrote Globe columnist Harold Kaese in the newspaper’s July 24, 1973 edition. “All it took was an upsurge in B.C. fortunes under Joe Yukica, a spacious stadium and the close relationship between a couple of the nation’s leading athletic directors. Now, who knows? Boston College may even get another football game with Harvard before Boston sinks into the sea.”

A month before the game was announced, Schaefer Stadium reps teased a “95 percent possibility” that the Irish would play the Navy Midshipmen there in 1974.

“I question the 95 percent estimate,” Bud Vye, director of Veterans Stadium, told the Philadelphia Daily News. “They’re upset down at Annapolis about the commotion this caused. They said a decision on where the game will played will be made by the athletic board. They indicated Philadelphia, Boston and Buffalo are the prime contenders.” (Philadelphia Mayor Frank Rizzo announced the ‘74 game was coming to the Vet in September 1973.)

Krause and Flynn had announced the first Boston College – Notre Dame game to be Sept. 13, 1975, and the teams had, together, almost sold out the game by late January 1975. The only tickets remaining were reserved for season ticket holders. (A little more on that later.)

In March, the Globe reported that both universities approached ABC about playing a night game on Monday, Sept. 8 instead of the following Saturday.

“A Monday night game would be an exception to the regulation limiting each school in two years to three so-called regular TV games,” wrote the Globe in its March 23 edition. “Notre Dame used up two appearances last year — and is penciled in as the third for its annual game with USC next wall.” The Irish had employed a similar strategy by getting its 1974 trip to Grant Field moved to Monday, Sept. 9. The No. 2 Irish beat the Georgia Tech Yellow Jackets, 31-7.

Both BC and ND stood to receive $244,000 in rights fees if the game was moved, which made a May 15 announcement surprising only in that the game would be played Monday, Sept. 15 instead of the week prior. (The Alabama-Missouri game took the rumored Sept. 8 slot.)

The switch from a Saturday afternoon to Monday night didn’t dampen enthusiasm, Krause told The Globe in August.

“Of all the games we’ve ever played, BC goes right to the top. The demand for tickets has been as great as for any game we’ve played. That includes Southern Cal, Army, Michigan State,” Krause told the newspaper. “I’ve talked to Bill Flynn…he claims he could have sold 100,000 tickets.”

(The Notre Dame Club of Boston’s membership jumped from 300 in 1973 to 30,000 two years later, according to member Neil Twomey of South Boston.)

For as low as $39, a fan could get the “Boston College package,” which entitled them to five Harvard games and a pass to four Eagles contests — including Notre Dame.

If Dan Devine wasn’t facing a tall enough task in replacing Ara Parseghian, the new coach would attempt something the Irish hadn’t tried in 50 years — two games in a single week.

The ninth-ranked Irish were 7 1⁄2 point favorites over the Eagles, but were sluggish from the gate. Notre Dame managed one first down in the first quarter, and 133 offensive yards before halftime. The Irish and Eagles were tied at 3, until Boston College self-destructed in the third quarter. Quarterback Mike Kruczek was hit by Ross Browner — back after a one year suspension for “violating dormitory rules” — while executing a pitch. Fumble! Eight plays later, Jim Browner, Ross’ younger brother, scampered into for a 10-yard score. A Randy Harrison interception off a tipped pass set up Al Hunter’s 24-yard touchdown that sealed the game in the Irish’s favor, 17-3.

“Wow. I wouldn’t have taken this job if I thought I’d die before our first game was over. And I nearly did,” Devine said after the game. “We can enjoy it for all of about five minutes.”