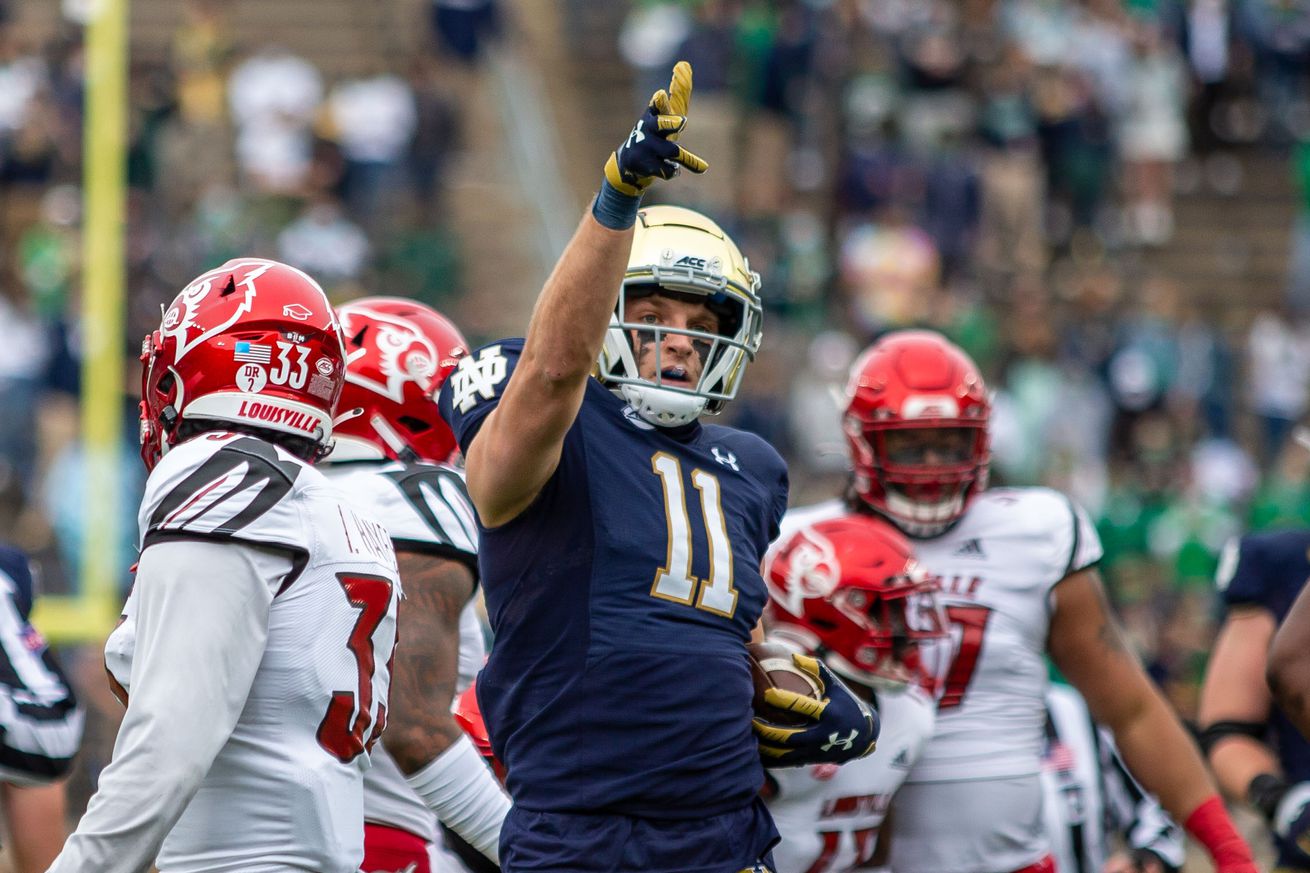 As Brian Kelly often likes to point out, winning is hard. Thus, let us all take a deep breath and acknowledge that the Notre Dame Fighting Irish defeated the Louisville Cardinals 12-7. However, I think the entire Notre Dame fan base can agree that the victory over the Louisville Cardinals was pretty ugly. The good news is that the season is still fairly young, and there is room for a ton of improvement on both sides of the ball. Looking ahead to the remaining 7 regular season games, I am offering 1 suggestion to each side of the ball to help ensure the team can finish the regular season undefeated.

Drastically increase the tight end targets in the passing game

After 4 games, the Notre Dame wide receiving corps has contributed 23 receptions, 259 yards, and 2 touchdowns combined. On the flip side, the tight ends have combined for 17 receptions, 187 yards, and 1 touchdown. The argument could be made that the Irish haven’t really needed to lean on the right arm of Ian Book thanks to the dominant rushing attack Notre Dame currently possesses. Against Louisville, Tommy Rees made a point early in the game to try to get the wide receivers involved to no avail. The offense struggled to move the ball early in the contest as it became apparent that the receivers as a whole were struggling to get open or make contested catches.

What I believe the coaching staff needs to examine is how to incorporate the tight ends into the downfield passing game, specifically on intermediate and deep routes in the middle of the field. Tommy Rees has shown an early desire to have multiple tight ends on the field at all times. Thus, the staff needs to begin designing passing plays that involve tight ends running down the field. With how lethal the running game has been during the early portion of the season, defensive coordinators are going to begin game planning to stop it. By having multiple tight ends on the field at all times, it will make it difficult for opposing defenses to determine whether the play will be a run or a pass. By using the play action attack to their advantage, the Irish offense could open up big holes down the middle of the field for chunk passing yards. Tommy Tremble, Michael Mayer, Brock Wright, and George Takacs are all too quick for a typical linebacker and too big for a typical safety. Featuring these 4 players in the passing game could quickly move the stagnant passing attack to a feared weapon for the Irish (think Stanford during the Jim Harbaugh regime and early portion of David Shaw’s career). Creating a semblance of a passing game will only further serve to benefit the ground game which is the true strength of this year’s offense.

The 2019 Notre Dame defense finished the season +15 in turnover margin and caused a total of 26 turnovers. Conversely, the 2020 defense currently stands at +1 in turnover margin on the year and has generated a measly 2 fumbles. I realize this may sound nitpicky following an outing in which the unit allowed 233 yards of offense to an explosive Louisville offense. In fact, outside of the Florida State game, which could be explained away by the long layoff, the defense has held each opposing offense in check. Yet, if the defense could increase its propensity to force turnovers, they could take their game to another level.

By generating more turnovers, the defense in theory should be providing its challenged offensive counterparts a shorter field with which to work. If the offense can take advantage of these opportunities, the team should score more points. Thus, the defense will be able to play to its strength and unleash its vaunted pass rush to wreak havoc on opposing quarterbacks. Furthermore, by getting off the field quicker, the defense should hopefully limit the amount of time on the field each week. Over time, this can make the difference between an exhausted defense at the end of November or a group that seemingly is getting stronger each week at the most crucial point of the season. Lastly, an especially green secondary will be able to gain experience and confidence without having to play in as many close games as otherwise anticipated.

As stated previously, this team is far from a finished product. While there is certainly room for growth on both sides of the ball, let’s not forget to enjoy the fact that the Notre Dame Fighting Irish currently hold the #4 ranking in the country and are sporting an undefeated record 4 games into the season.