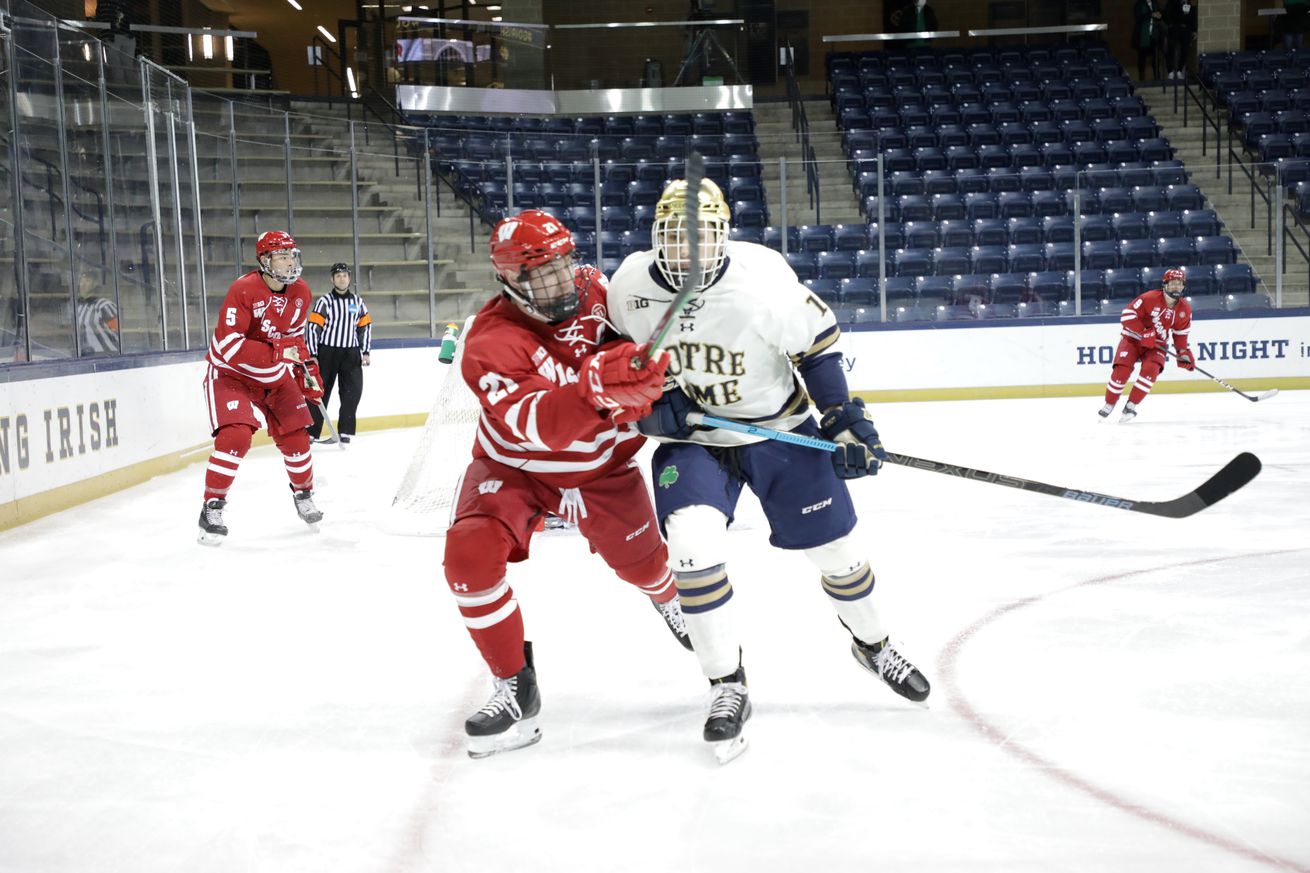 The last time the no. 20 Notre Dame Fighting Irish took the ice, their quest for a third straight Big Ten Tournament championship ended. Days later, the same could be said for each remaining team in the tournament, as the season was called off due to the COVID-19 pandemic. On Friday, against the Wisconsin Badgers, the Irish finally took the ice once again at Compton Family Ice Arena. It was an audience consisting only of immediate family members on hand to see the opener of the Big Ten hockey season.

For a team with two preseason All-Big Ten selections on the blue line, it seemed like new starting goaltender Dylan St. Cyr would have plenty of help from a team whose recent success has been thanks in great part to their stellar play on defense. The second generation goaltender who took over for former Richter Award winner Cale Morris had every right to feel confident coming into the season opener.

It was the Badgers who St. Cyr stopped 32 times on his way to a 5-2 victory as a sophomore two seasons ago. However, this time around, help wouldn’t come so easily, as the Badgers landed ten shots on net in the opening period, thanks to sloppy defense by the Irish. Linus Weissbach got the scoring started, thanks in part to a spectacular pass by Ty Pelton-Bryce.

The game’s first penalty didn’t come until nearly midway through the second period, when Wisconsin forward Owen Lindmark was called for holding. However, Notre Dame’s power-play, which was ranked 29th in the nation a season ago, couldn’t capitalize.

Two minutes after killing their penalty, Wisconsin was on a power-play of their own when Matt Hellickson was called in the corner for elbowing. This would lead to Edmonton Oilers 2020 first round pick Dylan Holloway knocking in a goal from the slot to extend the Wisconsin lead.

Going into the final frame, the Badgers were out-shooting the Irish 18-15. However, very few of those fifteen could be considered quality shots for Notre Dame. The best chance to cut the Wisconsin lead in half came during a giveaway on a change that led to Pierce Crawford getting the puck on goal, but Robbie Beydoun was not letting anything get past him in this contest.

Keeping the pressure on.

With 2:29 left, St. Cyr was pulled. 47 seconds later, Wisconsin forward Roman Ahcan was called for hooking. The opportunities with a man advantage weren’t enough, as the Badgers left the opener of the weekend series victorious by a score of 2-0.

Wisconsin: Linus Weissbach at 13:05 of the 1st, assisted by Ty Pelton-Byce and Cole Caufield

Wisconsin: Dylan Holloway on the PP at 12:09 of the 2nd, assisted by Linus Weissbach and Roman Ahcan

Notre Dame takes on Wisconsin in the series finale on Saturday at 7:00 PM ET. The game will be broadcast on NHL Network.