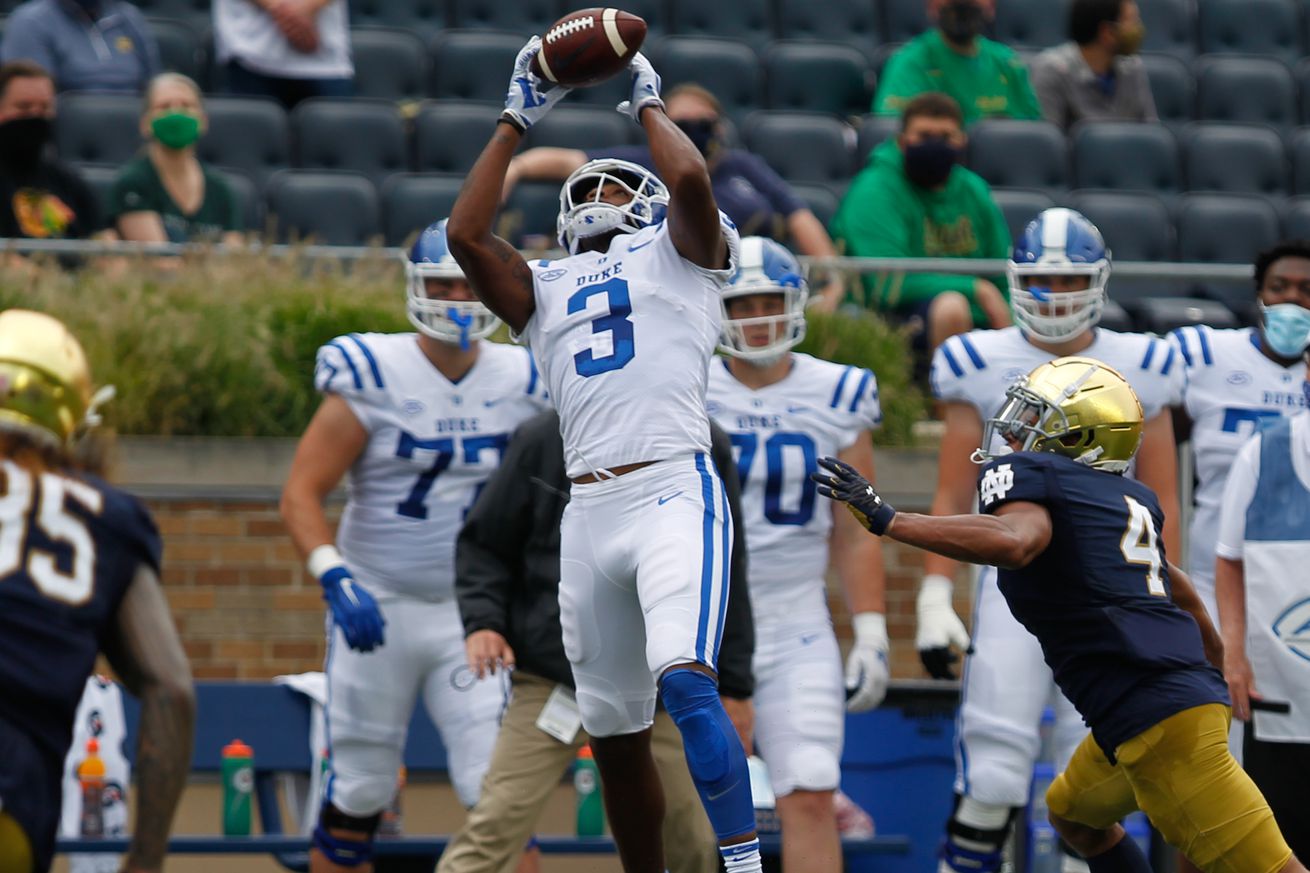 I remember my first beer

Is there a chance everyone is overreacting — at least a little bit — to the 27-13 win the Notre Dame Fighting Irish had over the Duke Blue Devils on Saturday? If you allow me to laugh for just a minute then the answer is ABSOLUTELY.

And that’s fine I guess. It’s hard to look past the information in front of our faces for deeper answers, and only a fool would dismiss problems altogether. This Hangover is here neither to promote rainbows or to throw out hot fire.

It’s just some things, so let’s talk about it.

Clark Lea is so slow you guys

One of the podcast questions we answered over the offseason was about Clark Lea and how his defenses start off “slow.” I suppose if you’re in the group that has a pitchfork for Lea about this, the Duke game was right in your wheelhouse.

It was also right in Lea’s wheel house.

So almost half of those yards were on two drives that ended in field goals. Slow Clark allowed a grand total of 6 points. All of that, and after the game, Jeremiah Owusu-Koramoah talked about how much Duke threw out there that they had not seen before (from Duke) which included pistol formations.

If you’re going to be critical of Lea’s “slow starts” then you have to marvel at how he adjusts. Here’s Duke’s drive chart in the second half:

That’s 119 yards y’all. That’s it. Of the 5 possessions, no drive was longer than 39 yards — and that was a TD on a short field because of a bad punt (and offensive problems).

In essence, Clark Lea’s defense did pretty much what most of us thought it would do, and perhaps even better given the circumstances in prep and compensating for the offensive issues.

Naturally people were concerned with the offensive line performance. Luckily for you (and especially me) a couple of guys put in the work to take a closer look. At how the line performed.

Last season, #NotreDame ranked No. 106 (62%) in Football Outsider’s power success rate. That metric defines the % of 3rd or 4th down runs, two yards or less to go, that achieves a 1st down or TD.

An example in the running game. In the first clip, Wright is beaten to the inside which doesn’t allow Williams to cut behind Eichenberg’s block. Also Williams has the option to cut behind Wright at the start. In the second, if Williams is patient to the outside, lots of room. https://t.co/9KHBiotk9x pic.twitter.com/5m13HJ7byx

Another example was in the screen game, where the line had three screens perfectly executed that resulted in the 20 yard gain by Armstrong, this 75 yard gain by Williams, and a would be huge play on another screen to Williams that Book missed. pic.twitter.com/dx944rxXhx

I mean my goodness look where this is going pic.twitter.com/sDu26V9K6W

On the very next play great pull by Banks, Tremble kills a man and Williams isn’t touched till he 12 yards down field. pic.twitter.com/63gR6VXhKF

As for pass protection, it was fine. Book’s doing the thing again where he slides into trouble, doesn’t get his feet set, and doesn’t see people coming open. He’s got the time. pic.twitter.com/RMIpk374pp

We knew this wasn’t going to be easy with Victor Dimukeje and Chris Rumph going up against Liam Eichenberg and Robert Hainsey, but Duke also doesn’t play straight up. They use a lot of stunts to help create confusion with their speed, and it was effective at times.

Two things that will help this line and team out quite a bit moving forward are:

ALL is not well, but it’s not torch the building time either. Book’s pocket presence could have been affected by not having some of his best receivers out on the field like Braden Lenzy and Kevin Austin. It’s going to take a bit of time to overcome that, and Joe Wilkins and Michael Mayer certainly help the cause.

I don’t buy into the Pete Sampson theory about Notre Dame season openers — not this year anyways. That theory claims that the way ND performs in its season opener is indicative of how they will perform the rest of the season, and it is generally a good thesis for Notre Dame football.

But let me ask you this… what if Notre Dame played the Navy Midshipmen first like they were supposed to as the season opener for 2020 before schedules changed? Notre Dame would have crushed them (see the BYU – Navy game for why). We would be on here touting the huge performance by the offense and a shutout from the defense. Would that have been indicative of how this season will go for the Irish? I think not — not this year.

Every team has to deal with the beatdown that the coronavirus put on preparation time. It shouldn’t be used as an excuse, but rather a reality and a challenge. Can Notre Dame — and especially Ian Book — improve on this performance? I think this week’s game against the South Florida Bulls will tell a much better tale about just how good the Irish can be this season. They got a game out of the way, which was a 14 point win over a conference opponent that has a better quarterback in Chase Brice than what they had last year. They got a win.

It’s 1-0 (1-0) on the season, and maybe that really is the most important thing right now. There are still GIANT questions moving forward, and because of Notre Dame’s media policy this season it’s a lot harder to get some of that information.

I’m looking forward to a sunny 69 degree day at Notre Dame Stadium next week for South Florida (actual weather forecast) and hope those questions are answered.