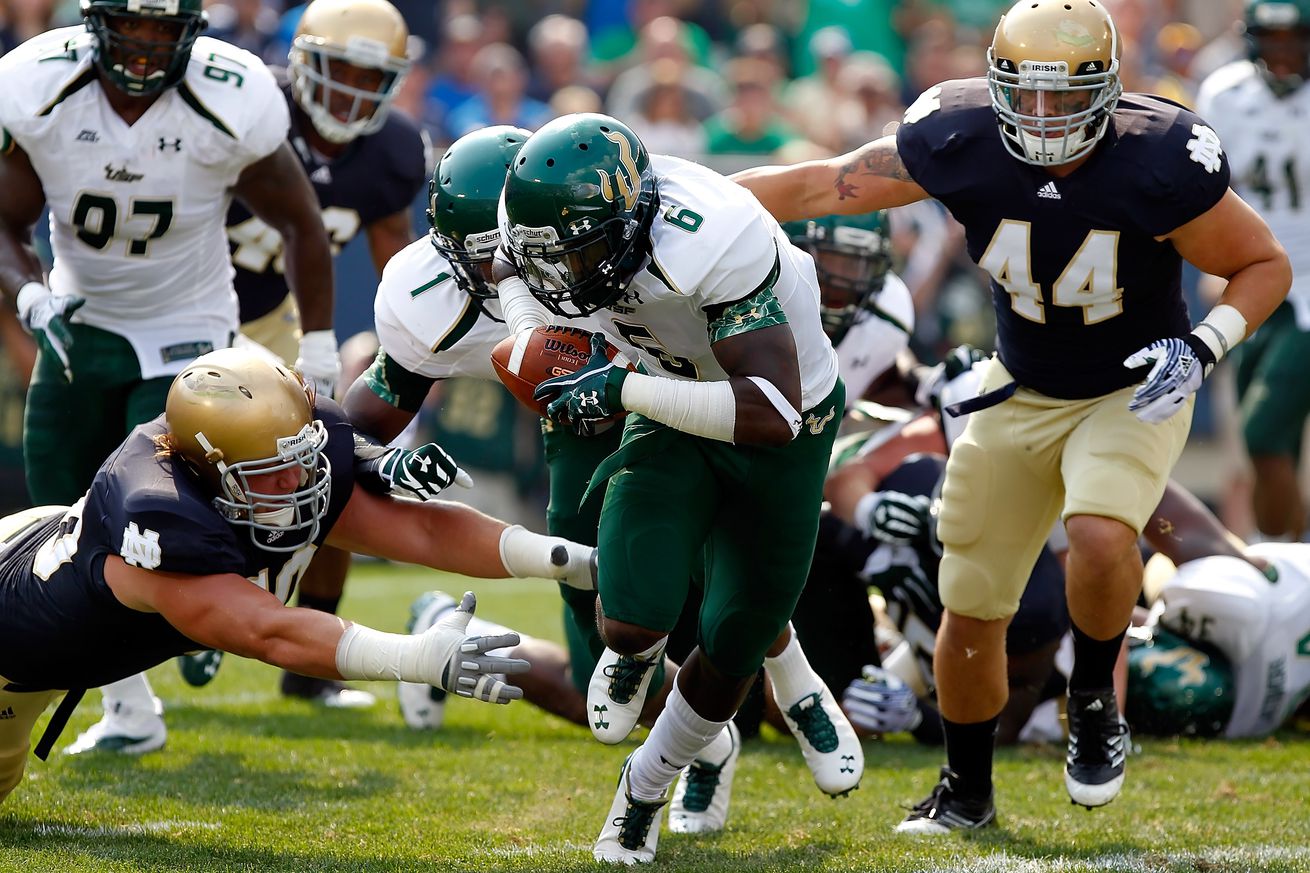 Pat Rick talked to Nathan Bond, Robert Steeg, and Collin Sherwin over at The Daily Stampede to see what ND is getting themselves into this weekend against South Florida

It’s almost game day once again for the Notre Dame Fighting Irish football team, as they look to build on a shaky, but overall positive, performance in last weekend’s 27-13 opening day victory over the Duke Blue Devils.

This week, Brian Kelly and the boys will play host to the only non-ACC team on their schedule, the South Florida Bulls, who enter this one 1-0 after easily dispatching The Citadel 27-6 this past weekend.

Of course, the last time the Irish hosted USF in South Bend was in 2011, and we all remember what happened on that stormy, drawn-out, nightmare of a day. So, instead of dwelling too much on that heading into this weekend, we should instead be asking ourselves what we need to know about USF this time around so that we won’t be taken aback by such a horrifying upset again.

I reached out to our good friends over at The Daily Stampede to answer that very question, picking the brains of Nathan Bond, Robert Steeg, and Collin Sherwin about their new coach, key playmakers on both sides of the ball, what they recall from that 2011 match-up, one of the best player names in the country, and much more.

So, let’s get to it and see what to expect from the Irish’s latest challenger!

1. The USF program is in flux a bit after firing Charlie Strong following last season. Do you think that was the right call, and with the hiring of Jeff Scott away from Clemson, are you excited about the direction this program will now take? What are you expecting overall from Scott’s first year at the helm?

The Daily Stampede: Financially, it was a difficult decision with almost a $3 million buyout, but the players were absolutely defeated, games were completely mismanaged, and there was no enthusiasm around the program. In the end, it was the right decision because USF Director of Athletics Michael Kelly brought in the best possible option for the current situation USF finds itself in.

2. Jordan McCloud had an efficient but light day passing the ball against The Citadel last weekend (11/16, 68 yds, 1 TD). What can Irish fans expect from him and his receivers in the passing game this weekend, against what will be a much better secondary and pass rush than he saw in week 1?

The Daily Stampede: With the game conditions slightly unfavorable for throwing the ball (little rain and damp), and having three starting offensive linemen unavailable for the first game, there wasn’t any reason to try to uncork the passing game. The hope is that those starting linemen can return so either McCloud (or the backup Noah Johnson) can start seeing some downfield passes.

McCloud hasn’t been one to force many throws if he doesn’t need to, which has led to him getting sacked numerous times. If they can’t get the pass protection down, expect a long day for USF’s offense.

3. The big story from USF’s opener has to be the Bulls running for 300+ yards as a team, driven by 4 different backs (Kelley Joiner, Johnny Ford, Noah Johnson, Brian Battie) who managed to rack up 250 yards on just 27 carries against the Bulldogs. Which of those guys should Irish fans expect to see a lot of on Saturday, and do you think the USF rushing attack will stay potent against a pretty tough Irish defense led by DC Clark Lea?

The Daily Stampede: Kelley Joiner has been electric to watch and he’s a nimble, tiny running back who can squeak through the offensive line and all of a sudden, he’s 10 yards past linebackers with no signs of slowing down.

Johnson showed a good amount of poise as a mobile QB and even led a few downfield blocks, and Battie, while a freshman, showed great vision and acceleration through the holes.

The one you’re going to have to look out for is Ford. I don’t think Weis Jr. and Scott were wanting to go too deep into the playbook, but Johnny can do it all, catching passes as a slot receiver, taking jet sweeps, or even lining up in a Wild Bull. I’d imagine he’s going to be utilized a lot more this game than against The Citadel.

4. What are the strengths and weaknesses of this year’s South Florida defense, and if you had to pick an X-factor at each level (defensive line, linebackers, secondary), who are the guys whose performances will be critical to USF slowing down an ND offense that struggled to find its footing in week 1 vs. Duke?

The Daily Stampede: The strength is without a doubt the secondary, led by former Tar Heel (and self-proclaimed Mayor of Tampa) K.J. Sails. He and the opposite corner Mike Hampton are trustworthy to be left on an island to have success against most wide receivers.

Behind them at safety are Nick Roberts (64 tackles, 2 picks, 5 PBU in 2019) and Bentlee Sanders (40 tackles, 1 pick, 3 PBU). Then, in new DC Glenn Spencer’s defense, we have a STAR player, who essentially plays a hybrid LB/DB in Vincent Davis, whose nickname is “Smoke” because you don’t mess with “Smoke,” and he’s been known to lay the wood from time to time. But the X-Factor is Sails in the secondary.

At linebacker, we have two juniors who have taken two strong leadership roles in the defense. Dwayne Boles is a silent leader in the huddle, but his athleticism speaks for him. Antonio Grier was all over the field against The Citadel and can find himself in the backfield racking up sacks and TFLs. The X-factor here is a toss up, but giving the nod to who has 10+ tackles in three of his last four games, including 10 tackles, a sack, and a forced fumble last week.

The defensive line may be the weakest unit of the team, but that’s mostly due to the unknowns rather than a lack of talent. The new three-man front features a Wofford transfer in Thad Mangum, a Northwest Missouri transfer in 2018 with Blake Green, and a few young guys with Jason Vaughn (came from a prep academy in 2018) and Darrien Grant, who is seeing extensive playing time for the first time since coming to USF. It seems like Glenn Spencer is putting them into the best position to succeed, and they held their own against a triple option team, getting penetration and causing disruption, but it’s to be seen what they can do against FBS competition. The X-Factor is Thad Mangum, we knew he was big and strong, but we’d love to see more of him.

For USF to slow down Notre Dame, the Bulls will need to force Ian Book to throw the ball by consistently bottling up running back Kyren Williams, create negative plays on first and second down, and force Brian Kelly purple. This is not to say USF isn’t worried about Book beating them, but with the secondary being the strength of the defense, it’s the best chance for success. A couple lightning delays, and red zone turnovers wouldn’t hurt either.

5. Notre Dame has a junior running back by the name of C’Bo Flemister. What are some of the best names on the South Florida roster, and do any of them top my guy C’Bo?

The Daily Stampede: Oh boy, we had this discussion in the offseason. We have some fantastic names on this team, the first one being linebacker Camp Gobler,* followed shortly by TE Flaubert Akepeu, and of course we can’t forget Michigan transfer Eddie McDoom, who opted out this season. My personal favorite is defensive linemen Nkemakolam Asomba.

*Pat Rick Editor’s Note: Camp Gobler is an ALL-TIMER. WOW, I love it so much.

6. The 2011 ND/USF game was somewhat of a nightmare for Irish fans, considering the long weather delays and the goal line fumble and losing a season opener to a Big East team coached by Lou Holtz’s son. Describe that game and your feelings about it from the perspective of a South Florida fan/follower and what it felt like to be on the other side of that day.

The Daily Stampede Answer #1: It was the highlight of the [redacted] era which was heavily subdued the next day due to the passing of former USF AD, and Tampa Bay Buccaneer HOF Lee Roy Selmon. USF Football isn’t a thing without LRS.

I watched the game with a USF running back (who was redshirting after transferring from Auburn) at the time, who kept telling me USF had a good shot to win. We didn’t expect it to be in that way, but it was a fantastic moment to be sure. It was the most “USF shouldn’t have won that” game in USF history, and there’s been some contenders.

Plus, we all learned about a new shade of purple that most didn’t know existed on this planet. Now, USF is on their fourth coach since that game, just hoping to put up a fight. Life comes at you fast.

The Daily Stampede Answer #2: As someone that was there, it was a pretty surreal experience. Kayvon Webster’s 99-yard scoop-and-score kind of embodied the day: USF got a turnover every time they needed it, and played juuuuuust well enough to steal a win.

I spent the first lightning delay in a van charging my phone, and the second in the concourse just hoping they’d let the teams back on the field so we could finish the job. It was a long journey from Chicago for most of us, and we were all incredibly gross by the end. But for a team that had just started playing full FBS football 10 years earlier, to get a win on that campus in that stadium was extremely cool. I also saw Cris Collinsworth at the grotto before the game, and yes he put money in the box.

It’s also a bit sad for many USF fans, as most of us were still in Chicago the next day when our former athletic director Lee Roy Selmon passed away. You cannot overstate what he meant to the program and to thousands upon thousands of us personally. I hope he got to hear the final score and had a nice smile about it before he left us.

7. These two teams feature super-young offensive coordinators with ND ties — former QB Tommy Rees on the Irish side, and Charlie Weis Jr. on the South Florida side. If both of them were to try out to be the ND Leprechaun, who would win?

The Daily Stampede: Tommy Rees is way too tall. Would be completely unrealistic. A good Leprechaun needs to be around 4 feet and 8 inches. Maybe a bit taller.

8. Alright, prediction time — who wins, what’s the final score, and provide your reasoning.

The Daily Stampede: Notre Dame handily wins this 42-10. The talent gap is too vast between the schools right now in Jeff Scott’s first year. Get back to me in 2028 when we play again (maybe).

I wanna give a massive shout-out to Nathan, Robert, and Collin for answering all the questions I tossed at them with some fantastic detail, and want to encourage you all to head over to The Daily Stampede for any and all USF football info and insights prior to Saturday.

Furthermore, be sure to follow them on Twitter for any and all hard-hitting Bulls football updates, and feel free to throw Nathan and Robert and Collin some follows as well — you certainly won’t regret it.

That’s it for this week, folks..GO IRISH!