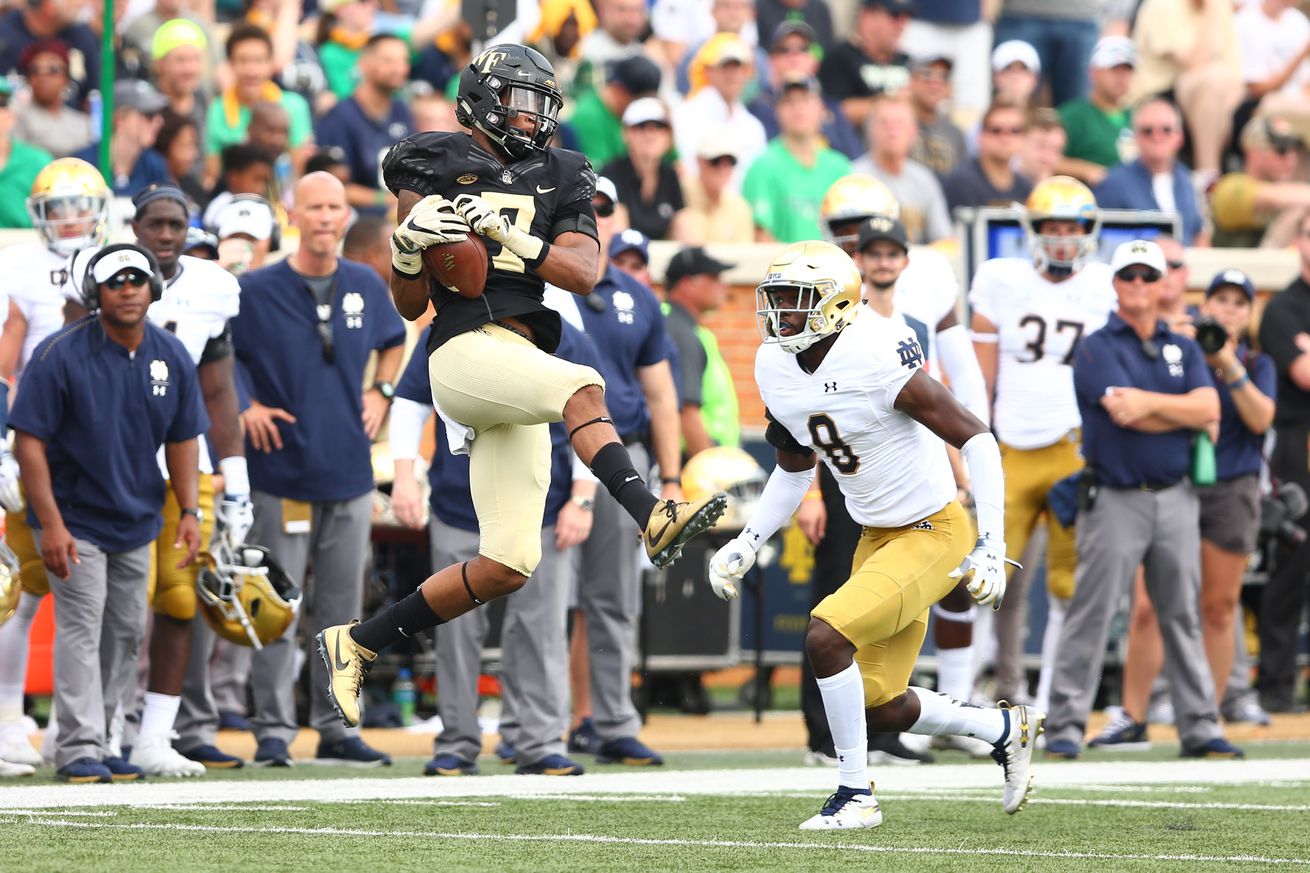 The now second opponent for the Irish this fall

This coming season is a weird and different one for many FBS teams, but it is especially different for the Notre Dame Fighting Irish. They are joining the ACC fully for this season, and they are playing a full ACC schedule. We here at OFD want to give you all a brief preview on some things to watch and remember when the Irish take the field against their 10 ACC opponents this season. Today, let’s take a look at a few things to keep in mind when the Irish take on the Wake Forest Demon Deacons.

3 Things to Know about Wake Forest

Their QB is Sam Hartman.

Irish fans might remember Sam Hartman from the 2018 game against the Irish. Actually, Hartman’s performance at QB was not really memorable, as he threw for zero TDs that day. I remember him for being a true freshman QB that was just getting pummeled by the 2018 Irish defense that was of College Football Playoff caliber. I actually felt sorry for the young kid that day because he was just getting demolished by our defense in that game. He was getting hit many times and HARD. Hartman has had more time under his belt with the program, so I wouldn’t anticipate him being a tackling dummy again.

It’s an overall fine record for a middle of the road team. However, the Demon Deacs lost 5 of their last 8 games last season. That includes a Pinstripe Bowl loss to Michigan State. They struggled down the stretch last season, finishing 4-4 in ACC play. It doesn’t seem like they would finish out the season much better than that this season. That is not to say they should be overlooked, but Wake does not have a lot of hype this season. Having fans for the game in Charlotte might’ve swung some advantage toward Wake, but that will not be happening because of The Rona.

Apparently, the ND defense needs to watch for a passing attack.

Our friends over at Blogger So Dear have previewed their game against the Irish, too. They might very well be correct in their analysis, but I’m going to use this as blogosphere bulletin board material. They are a bit skeptical of our secondary because of the supposedly weaker QBs the Irish saw last year. I’m hoping that we can see Shaun Crawford, JOK, and of course Kyle Hamilton do some serious damage especially in pass defense. It isn’t just Kyle Hamilton out there on defense.

*side note: Absolutely no hate toward our fellow SB Nation site here, this is more interesting to note that the Irish will have strong targets on their backs for being the kinda newbies to the conference. No free rides during our conference year. The Irish seem ready to roll through some full-time conference foes, though.