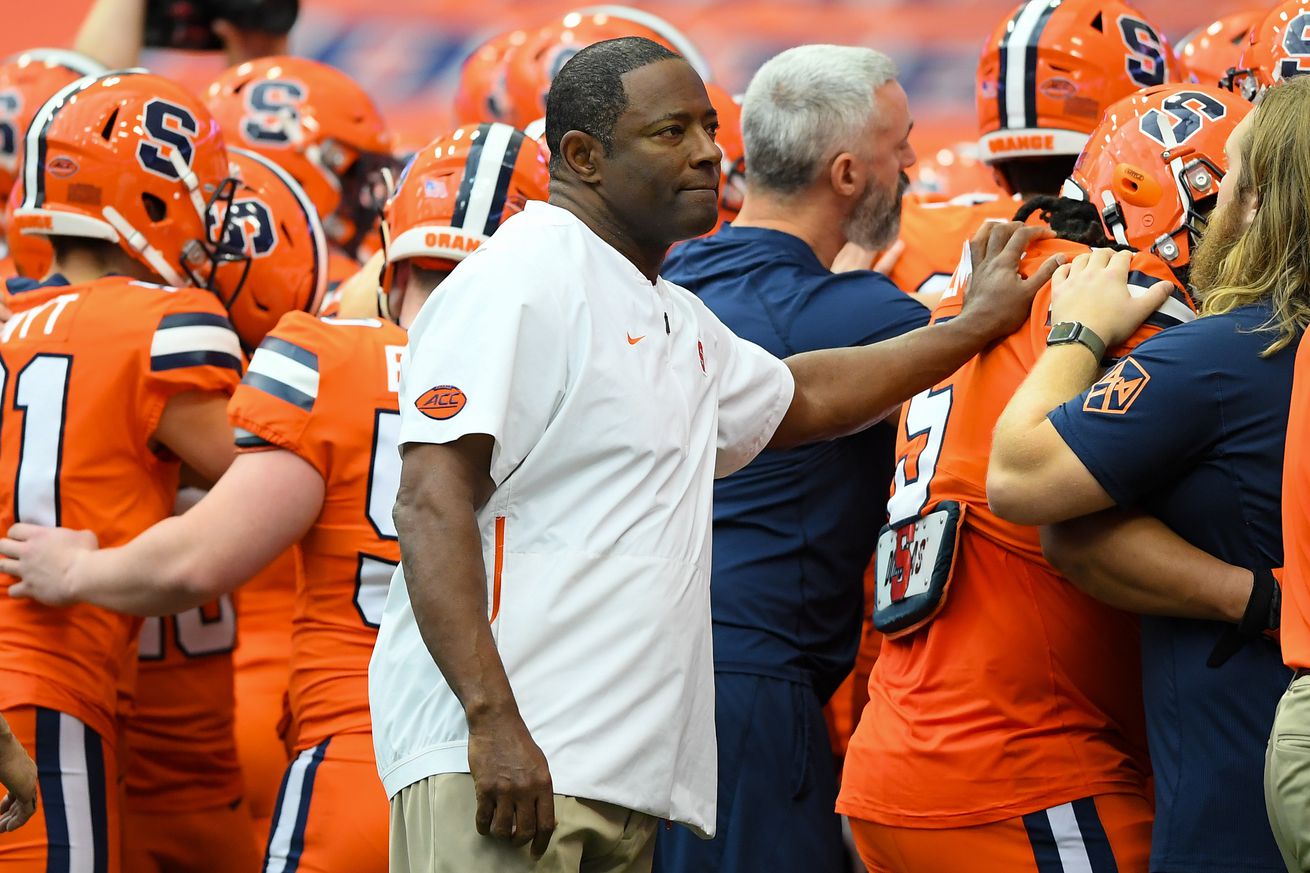 With the start of the season just around the corner, we’ll be taking a look at each ACC opponent the Notre Dame Fighting Irish will (potentially) face in the 2020 football season. Today brings us to an opponent the Irish trounced in late 2018 in a statement win before finishing an undefeated regular season: the Syracuse Orange.

Three Things to Know About Syracuse

Dino Babers Is Shaking His Staff Up

Everyone’s favorite name in coaching has decided it’s time for a change in his lieutenants.

So, the Orange are heading into 2020 with new coordinators on both sides of the ball, as Babers hired Sterlin Gilbert to run the offense and Tony White to head up the defense, and both guys figure to bring some strong experience and impressive past results to the table.

Gilbert is a well-thought-of offensive coordinator, having previously worked for Babers at Eastern Illinois, where he was the OC/QB coach for some guy you may have heard of named Jimmy Garoppolo.

Gilbert’s offense in his first season there ranked 6th in the FCS in passing, 7th in total offense, and 8th in scoring, as Garoppolo and star receiver Erik Lora put up ALL SORTS of numbers.

The following year, Garoppolo was even better under Gilbert’s tutelage, winning the 2013 Walter Payton Award (AKA the FCS Heisman) en route to putting up the 2nd-most passing yards in a season in FCS history (5,050), while also tossing 53 touchdown passes for good measure — which was a measly 4th-all-time in the FCS record books.

Last season, Gilbert served a year as head coach at McNeese State, delivering a 7-5 record before being swayed by Babers to come back to a Power 5 gig in the ACC.

On the other side of the ball, Tony White comes over to ‘Cuse after spending the last two seasons as Cornerbacks Coach and Defensive Passing Game Coordinator at Arizona State, and also having just been appointed to DC in December and manning that position in the Sun Devils’ 20-14 victory over Florida State in the Tony the Tiger Sun Bowl.

In his two seasons at ASU, the Sun Devils allowed just 13 passing plays of 40+ yards – a substantial improvement over the 34 such plays they gave up in the two years before he arrived. The ASU secondary made dramatic gains in terms of production under White, and in 2019 they finished the year 12th in the country with 65 passes defended. White had multiple corners named as All-Pac-12 Honorable Mention during his time there (Kobe White, Jack Jones, Aashari Crosswell).

Prior to ASU, White’s prowess in coaching-up a defense could already be seen in his work under Rocky Long at San Diego State, where his DBs finished with pass coverage grades ranked 31st or better in three of his last four years there, according to Pro Football Focus.

In 2017, the Aztecs were 11th nationally and first in the Mountain West in total defense (314.5 ypg) and ranked 15th in the country in passing yards allowed (178.7). This was after the 2016 season that saw San Diego State lead the country with 26 interceptions.

As an added bonus for Babers and his program, White is also an excellent recruiter, having been named the Scout.com Mountain West Recruiter of the Year two separate times (2011, 2013), and also having been recognized as the top recruiter among non-Power-Five schools in 2014 by Rivals.com.

So, the Syracuse team the Irish see this fall could certainly look different than the Orange of the past couple years — especially in terms of scheme — thanks to the new coordinators brought in by Dino Babers as he tries to turn things around and tap back into the magic that team found in 2018.

That is, of course, the magic they had BEFORE they played Notre Dame.

Tommy DeVito Is Still There

The coordinators may be new, but Irish fans will recognize a familiar name under center for the Orange, as QB Tommy DeVito returns as the starter there.

The redshirt junior was first introduced to most Irish fans back in that 36-3 trouncing the Irish laid on the Orange in a battle of top-12 teams, as starter Eric Dungey left the game with an injury, leaving DeVito and his more pass-first style to try to deal with Clark Lea’s defense.

DeVito had a rough go of it, passing for just 105 yards on 14-of-31 passing while tossing two picks and getting sacked SIX times by the Irish.

Running for his life became somewhat of a habit the following season, as DeVito spent 2019 getting sacked a great deal — 44 times to be exact. This year, DeVito is certainly hoping that having 3 OL starters returning will help, as he has to be excited about getting to run Gilbert’s up-tempo, pass-heavy offense — as long as he has time to throw.

The development of those 3 returning OL from their 2019 experience will be crucial for how the Orange offense is able to produce — especially since ‘Cuse will also be replacing top receiver Trishton Jackson (left early for NFL) and slot receiver Sean Riley.

DeVito has a nice arm, though (2,360 yards, 63% completion, 19 TD, 5 INT in 2019), and the Orange still have some skill position talent, so it should be fun to see if he has a better day this time against the Irish, or if the likes of Kyle Hamilton, Jeremiah Owusu-Koramoah, Adetokunbo Ogundeji, and Daelin Hayes will tee off on the redshirt junior and make his life a living hell once again.

The Orange Defense Could Be Rough, but the Secondary Will Be Solid

Syracuse’s defense lost 7 starters from last season (all its starting LBs, plus multiple key DL including top edge rushers Alton Robinson and Kendall Coleman), and with Tony White coming in and installing his 3-3-5 scheme, it could be a rocky, transitional year for an unproven group experiencing some flux.

With that said, the one group that returns some proven talent is the secondary. Syracuse brings back junior safety Andre Cisco, who’s the FBS active leader in career interceptions (12) and has found his name on a number of preseason All-American teams, including earning 1st Team AP All-American honors.

Seeing Cisco and Kyle Hamilton in one game is a TON of safety talent in one match-up, so that will be a fun thing to watch, with two of the best safeties in the country trading big plays.

Joining Cisco in the defensive backfield are a couple other DBs to know, Trill Williams and Ifeatu Melifonwu. Both are talented, athletic, and could end up as All-ACC picks at corner or nickel as well, and so it’s clear the Orange defense will need those guys to be all over the field making plays whenever they can, considering all the new and unproven guys in the front seven.

Most likely, Ian Book and the Irish offense will move the ball fairly easily against this group, but with top-end talent like Cisco out there trying to make some momentum-turning plays, things could occasionally get interesting, without a doubt.