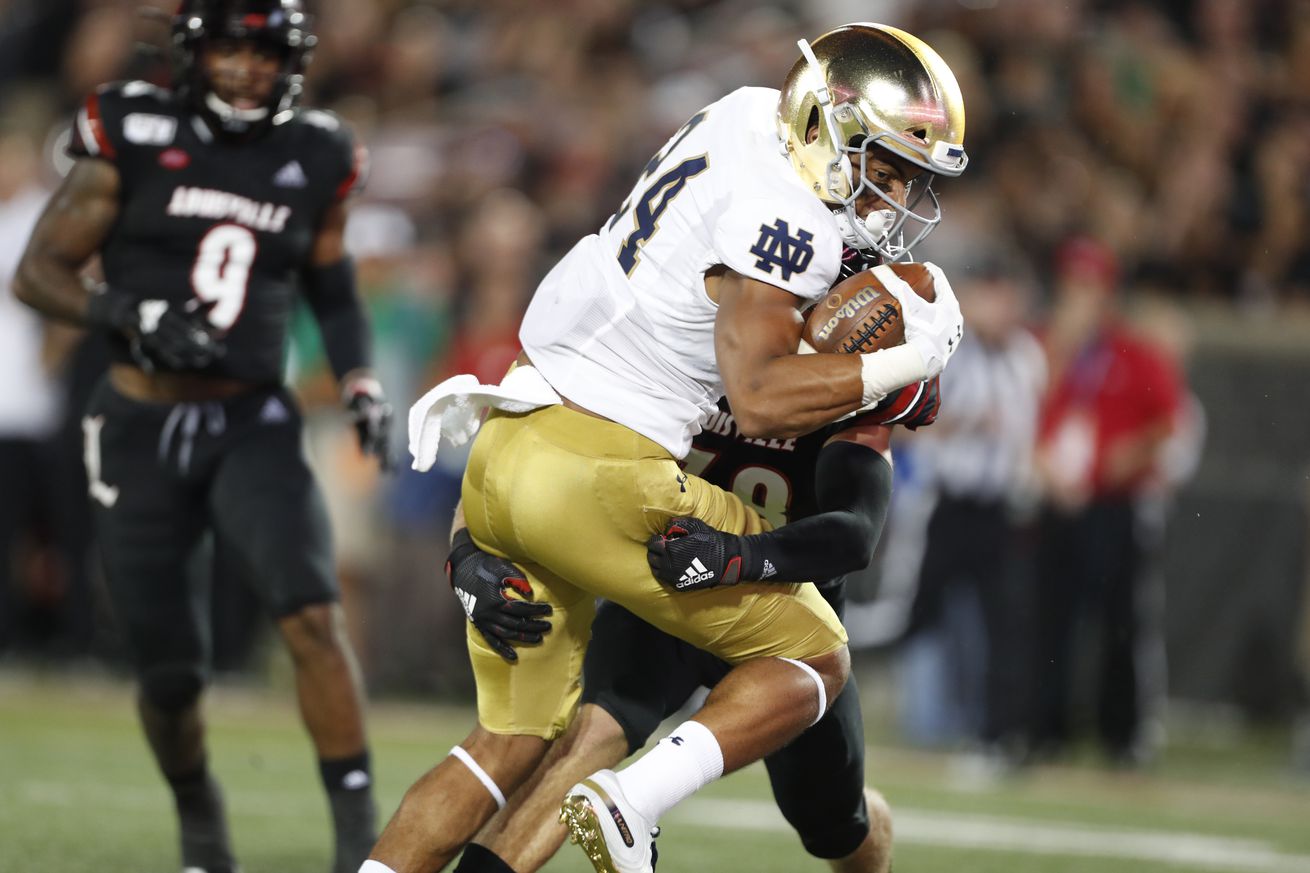 With the start of the season just around the corner, we’ll be taking a look at each ACC opponent the Notre Dame Fighting Irish will (potentially) face in the 2020 football season. Today brings us the Louisville Cardinals, with talented and respected Scott Satterfield at the helm. After a disastrous (like really, really, bad,) 2018, Satterfield took over and rejuvenated the team in 2019 and looks to ride the momentum heading into 2020.

Three Things to Know About the Louisville Cardinals

Their Offense Returns a DANGEROUS Trio at QB, RB, and WR

Three names to know are Micale Cunningham, Tutu Atwell, and Javian Hawkins. Cunningham emerged as the starting quarterback early in the season and made strides throughout, throwing for over 2,000 yards and rushing for nearly 500. Tutu Atwell is a national name and one of the most dangerous all around athletes in college football. He is ranked by PFF as the 40th best player in college football and rumored to have a 40 in the 4.2 range. He flashed against the Irish a year ago, and finished the season with 1,276 receiving yards and 12 touchdowns. The last head of this beast is running back Javian Hawkins. At 5’9, he is not a bruiser, but incredibly productive and consistent. He rushed for over 1,500 yards and had eight 100 yard games. Notre Dame will need to develop a tight game plan to disrupt Cunningham and limit the explosive plays of Hawkins and Atwell.

As stated above, Atwell can burn….

Scott Satterfield is a Rising Name in College Football

Satterfield inherited one of the worst teams in college football a year ago. The players openly quit on Bobby Petrino, and gave up 52 points or more in their final 5 games of 2018. Satterfield arrived from Appalachian State, where he led the transition from FCS to FBS. He preached a much needed culture change heading into 2019, and it clearly worked. He went 8-5 a year ago, capping it off with a win against Mississippi State in the Music City Bowl. If Setterfield can continue his momentum, look for him to be a hot name when Brian Kelly retires in a few years….

He comes by way of the utter dumpster fire of a culture that is Liberty Football. This is a big boost to the secondary and defense overall, who struggled a year ago. Clark brings experience, starting as a true freshman at Liberty. Early reports out of Louisville camp suggest he could be a difference maker on the defense. He isn’t big, standing at only 5’10, but brings a toughness and chip on his shoulder with something to prove at his new home. I’m glad the NCAA granted him his waiver, as they should do with every player who chooses to leave the cesspool of a program under Hugh Freeze…..I wouldn’t be surprised to see that team’s testing protocol was for them to “pray they don’t have the virus” each day…..but anyway Clark’s immediate eligibility is big for the defense as a whole.

If you need a recap of last seasons opener, see below, and as always. GO IRISH