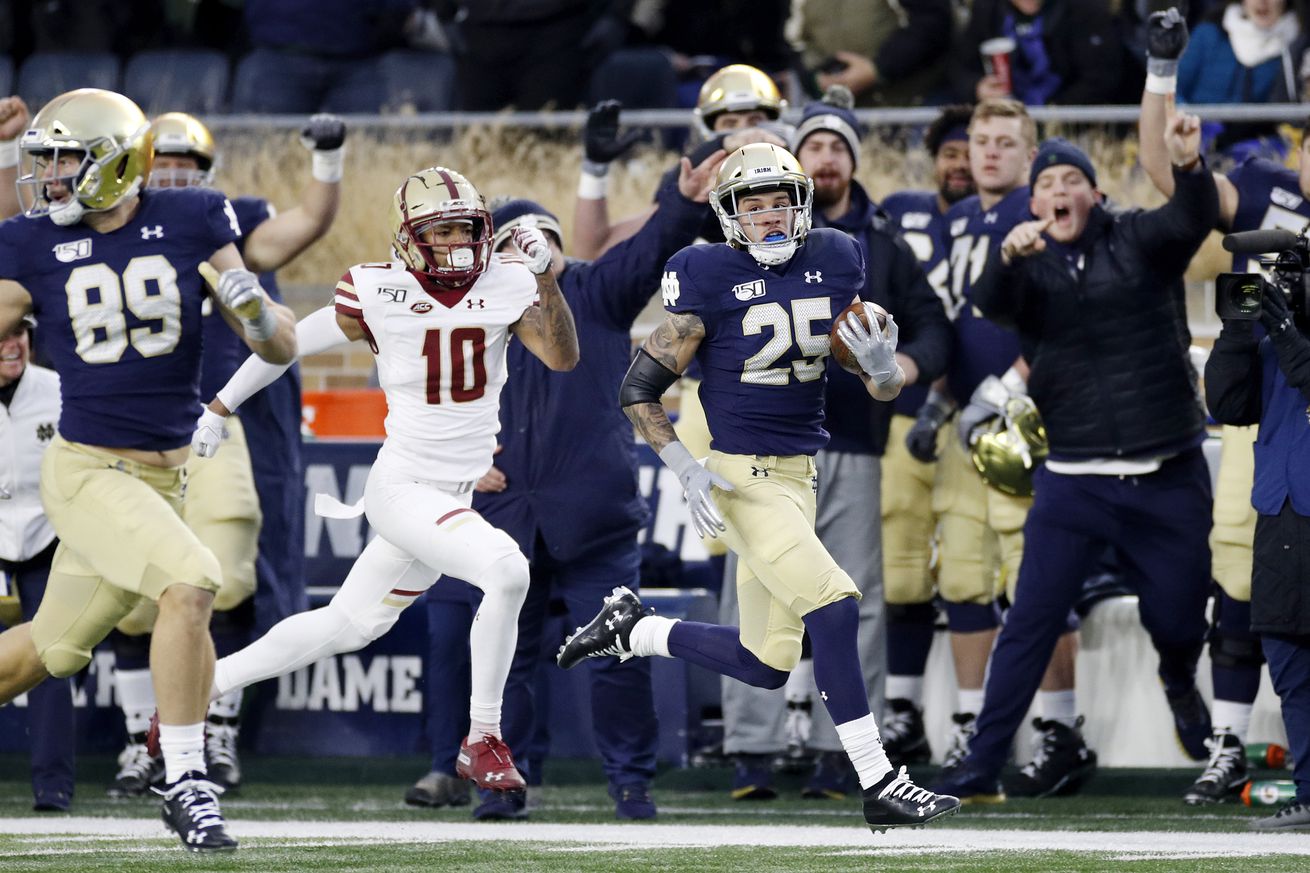 We are fast approaching the start of the 2020 season. In order to prepare, we wanted to take a look at the Notre Dame Fighting Irish schedule and perform a quick breakdown of each opponent. Next up: the Boston College Eagles.

Three Things to Know About BC

The Elephant in the Room

Phil Jurkovec will join the Eagles this year, having not been blocked from playing by Brian Kelly – contrary to the self-pitying conspiracy-mongering of BC fans. Jurkovec is the favorite to start at quarterback for the Eagles in 2020, and will get the chance to play against his former team on November 14. As we all know, Jurkovec brings outstanding athleticism and arm strength; as we all also know, he was unable to mount a serious challenge to Ian Book as QB1 despite those remarkable physical gifts.

Phil will likely get the chance to prove his doubters wrong in 2020, as the Eagles’ depth chart at quarterback is relatively thin. We saw what Dennis Grosel could and could not do in South Bend last year, and the two men below him have attempted seven passes between them. The Eagles always play the Irish with a chip on their shoulder in an effort to prove themselves – this year that chip may be bigger than ever.

Continuing a long-standing tradition of BC football, the Eagles return several peskily competent players at skill positions, who will likely make this game a little more interesting than it should be. Running back David Bailey, who managed to rack up over 800 yards and seven touchdowns as the backup to A.J. Dillon in 2019, is the primary threat, and can be expected to produce at a higher level as the starter in 2020.

Wide receiver Kobay White and tight end Hunter Long likewise bring back signficant talent and experience, and if Jurkovec’s play is up to snuff they could form a dangerous passing attack for the Eagles. While the Irish defense should still be able to put the clamps down, don’t be surprised to see BC score some points.

New Faces on the Sidelines

Jeff Hafley takes the helm for BC with the goal of getting the program out of its long-term rut of mediocrity. He brings significant experience on the defensive side of the ball, where the Eagles were a disaster in 2019. If Hafley is able to make significant inroads on defense, the solid talent BC has returning on offense could put them in position for a solid season.

On the other hand, Hafley faces some tough tasks in his first season, as his first Eagles squad must tangle with some of the ACC’s best – in addition to the Irish, the Eagles will play the Clemson Tigers, Virginia Tech Hokies, Louisville Cardinals and North Carolina Tar Heels. It’s possible – probable, even – that the Eagles see marked improvement in on-field play and still end the season with five or six wins.