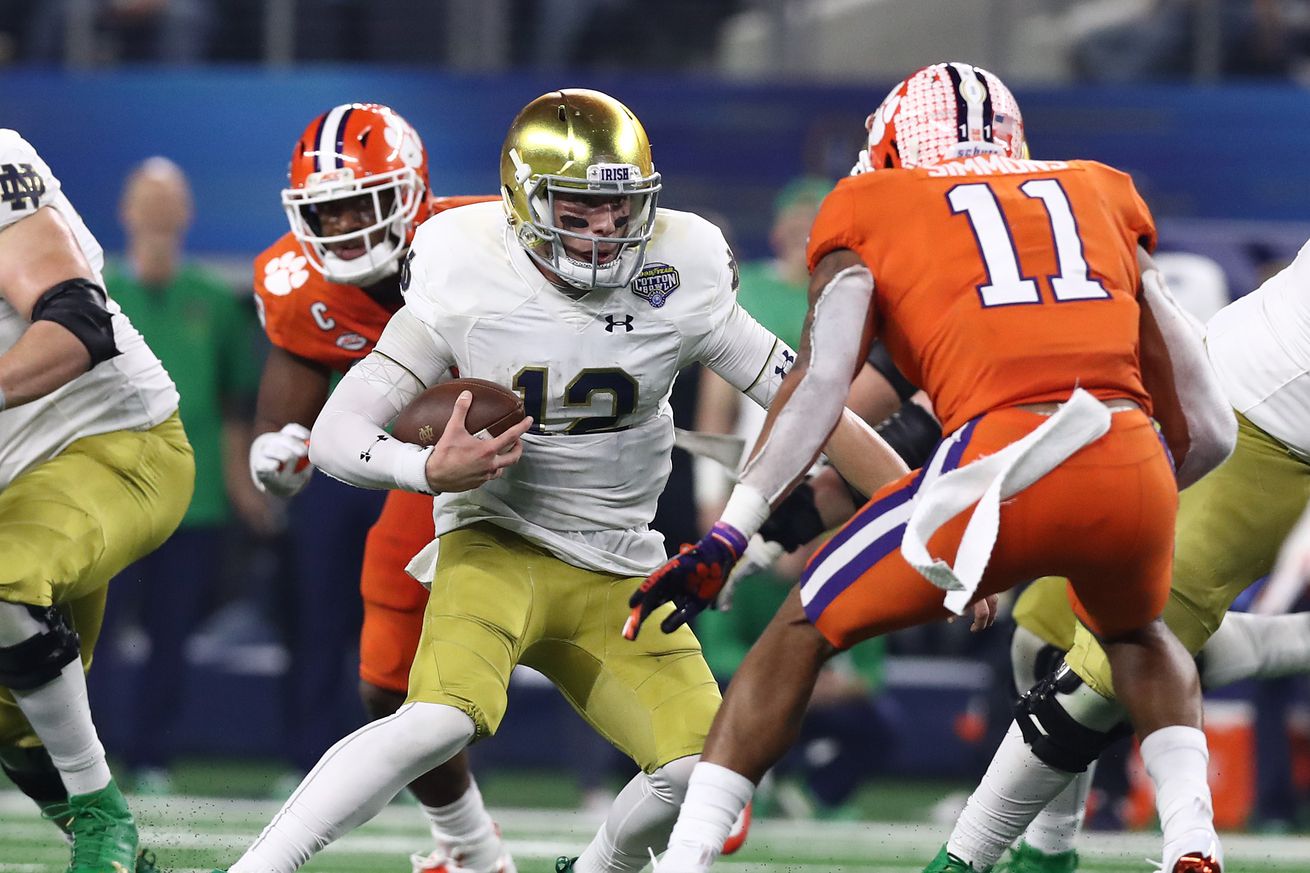 Analytics That Lead to a Conclusion You May Not Like

It’s here, and it’s everything we dreamed about. The top ranked Clemson Tigers are coming to South Bend to take on the undefeated fourth ranked Notre Dame Fighting Irish. The game will have major College Football Playoff and ACC Title Game implications, and for the first time this season the Irish will need to play their best football to come out on top. For all our new readers cramming for the big game, please follow this link to some definitions and context that will allow you to get the most out of our analysis.

The Tigers will be forced to take the field without starting quarterback Trevor Lawrence who will be sidelined as he recovers from COVID-19. In classic Clemson fashion he will be replaced by the number two ranked quarterback in last year’s high school class, five star recruit DJ Uiagalelei. Uiagalelei was excellent in his work against Boston College, and in his limited snaps this season is throwing for 0.41 EPA/Play, a mark that is identical to Trevor Lawrence so far this season. Uiagelelei has also been more effective than Lawrence on the ground, but with only nine carries it’s too early to make any determinations there. Still, he is a very good quarterback and just calling him a backup is doing him a disservice.

One key for Uiagalelei to having a Lawrence-esque performance is getting Amari Rodgers involved. Rodgers is a true deep threat, with an efficiency so high it almost breaks our graph. The Irish have been vulnerable against the deep ball this season, giving up at least one pass of over twenty air yards in each of their last three games and 0.96 EPA/Play (NFL average is 0.32). Making Uiagalelei uncomfortable starts with Shaun Crawford and other players in deep coverage keeping Rodgers and Cornell Powell (who showed excellent chemistry with Uiagalelei last weekend) in front and not allowing throws to be completed in tight windows. It will be interesting to see if Kyle Hamilton is tasked with helping over the top or if he continues to be given individual coverage assignments. Either way, limiting deep passing will be critical to Irish success.

Clemson’s rushing attack has been surprisingly average, despite having Travis Etienne in the backfield. He’s been lethal in the passing game, averaging an absurd 0.91 EPA/Target which leads the team. However, Clemson’s run blocking has taken a step back this season, going from PFF’s 15th ranked unit last year to 31st in 2020. As a result, he’s averaged only 0.1 EPA/Rush on the ground, which ranks 52nd out of 171 eligible players. Nevertheless, stopping Etienne will still be critical tomorrow as he will see plenty of work both through the air and on the ground.

Unsurprisingly, this is the best defense the Irish will play all season. Clemson is excellent against the pass and run, allowing -0.23 EPA/Pass and -0.17 on the ground. Clemson will be without star linebacker James Skalski in this one, and defensive end Xavier Thomas will miss the first half due to a targeting penalty sustained against Boston College. Skalski has the highest PFF grade among Clemson linebackers and is excellent in pass coverage. Thomas has a lot of hype as the 3rd ranked recruit nationally in his class, but it doesn’t match his production on the field. He has only played 61 snaps this season and his PFF grade has fallen in consecutive seasons.

Taking advantage of holes in the Clemson defense starts with the passing game. The Irish aerial attack has been steadily improving and has now overtaken the run game in efficiency in terms of EPA/play. Boston College tried to rely far too much on their run against a team that can put up points at will, and it cost them. In the first half, the Eagles ran 13 times out of 29 plays and averaged 0 EPA. Seeing this success and trying to control the clock, they ran 15 times out of 29 in the second half and averaged an abysmal -0.25 EPA. The Irish cannot fall into this trap. Their early down pass rates need to be over fifty percent, just as they have been in the last two games. They need to avoid trying to get into “Third and Manageable” and instead look to convert first downs on first and second down. This is not to say the Irish need to neglect the run, the way they did last year against Georgia, passing 78% of the time. Ian Book is not a quarterback you can win with using that strategy. Rather, the Irish need to force the Tigers to respect Ian Book’s arm early. If Clemson decides to load the box, Notre Dame needs to be allowed to throw to get them to back off and drop more players into coverage. This will create space for the ground game to work and have success tomorrow night. Kyren Williams and the 12th most efficient rushing attack certainly have a role to play, but in a Notre Dame victory it will be as a complement to the pass game, not the other way around.

Despite Ian Book being pretty efficient when he pushes the ball downfield, we shouldn’t be expecting many changes from his style of play. Despite having receivers who have shown ability to win deep in McKinley and Skowronek, with 2.5 seasons of evidence he is who he is. But Notre Dame can win with that style of play, it just needs to emphasize what he wants to do while also trying to tease some deep shots out of him, similar to Kyle Shanahan and Jimmy Garopolo (pure stylistic comp, not ability). Targets behind the line of scrimmage are generally inefficient (NFL average was -0.3 last year). And Notre Dame has, unsurprisingly, not been great on short targets this season. But Avery Davis has shown potential on these plays, with a respectable 0.32 EPA/Target last weekend despite an aDOT of -0.6. Utilizing Davis in the Braden Lenzy role and getting more creative with the tight ends and receivers at the intermediate level could produce explosive plays without relying solely on Book to push the ball.

This all may seem contradictory, how can a team focus on explosive passing plays while keeping the ball close to the line? The key here is Tom Rees needs to be comfortable taking what the defense gives him. If Clemson is routinely dropping seven or eight in coverage, the run game becomes more viable as Notre Dame wins the numbers battle and has the maulers to gain big chunks of yards. If Clemson is routinely bringing pressure, the short quick hitting passes to Avery Davis and Michael Mayer will open up and allow for some targets deep with the corners in single coverage. It will be up to the coaches to make these adjustments on the fly, but if the Irish are to truly contend this year these are the types of live adjustments championship coaches have to make.

Even without Lawrence the Tigers offense is too good to not score. If Notre Dame can hold Clemson to around 0.15 EPA to 0.2 EPA/Play, that should be considered a win defensively. Asking the defense to hold Clemson to under 20 points is unreasonable and unrealistic, no matter how highly you think of Clark Lea and the D-Boys. The question is if the Irish have the offensive firepower to keep up with an offense that is going to move the ball. If Notre Dame does win, it will likely be behind the strength of Ian Book, but it’s difficult to see the passing game having the kind of explosive game needed to win here. We’re going to take the Tigers 34-24. Most analytics outlets gives the Irish a 35% chance to win, which seems about right. Notre Dame is knocking on the door of the elite teams, but it’s missing the elite quarterback it needs to level the playing field.