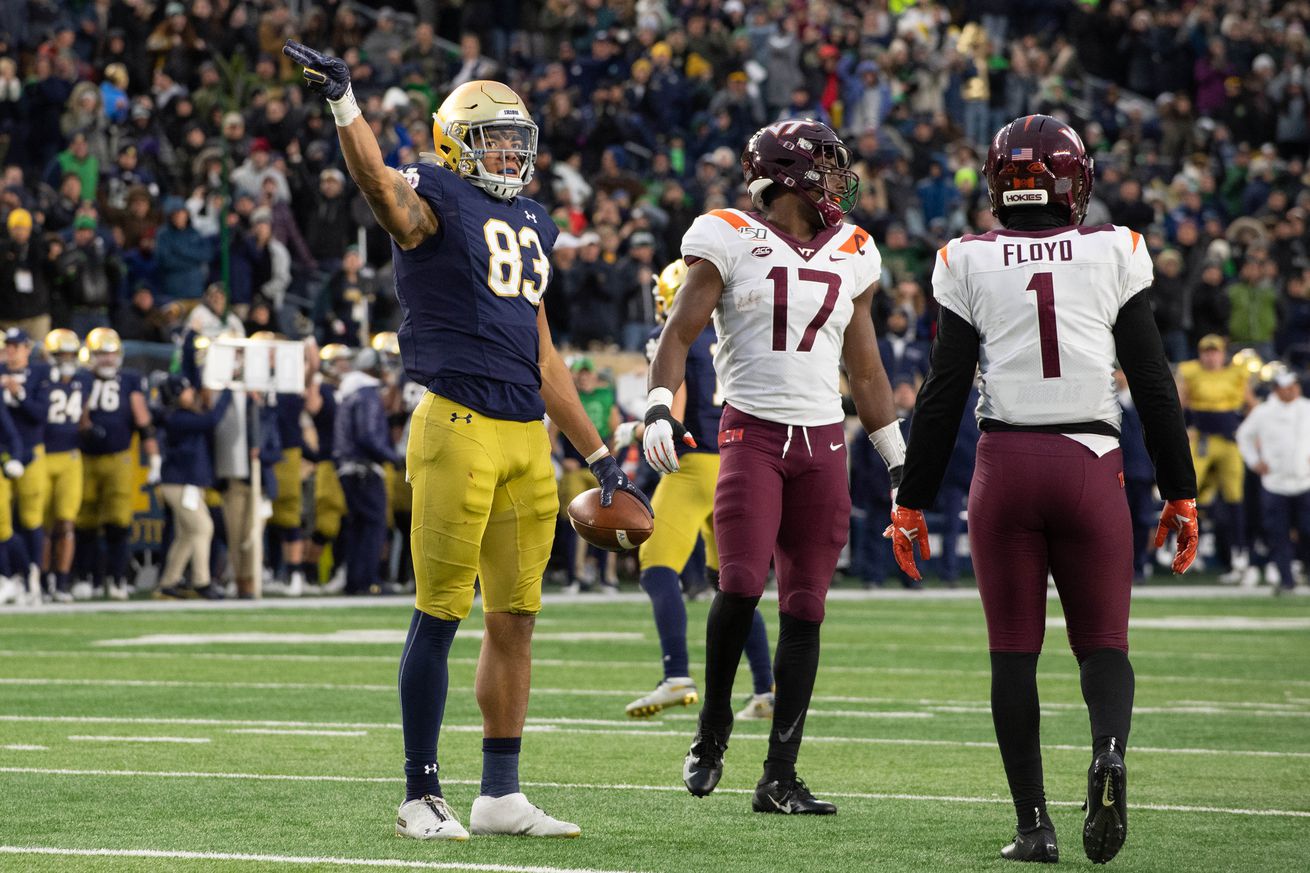 After a crushing loss against Michigan, the Notre Dame Fighting Irish returned home to face the Virginia Tech Hokies in their first game without any CFP aspirations. The Irish had a few uncharacteristic offensive turnovers and kept the Hokies in a game they had no business being in. However, despite all of the poor play in the second half, Ian Book led an incredible two minute drill giving the Irish a win and their most exciting finish in recent memory. As always, here is a link to a primer on the statistics that will be used in this article, and we will start with a particularly wild edition of the win probability chart.

The Irish were extremely efficient in the first half, getting into the red zone four times but only coming away with fourteen points. By contrast, the Hokies entered the Irish red zone just once but matched Notre Dame’s scoring. The only way for this type of disparity to happen is some kind of disaster like this directly before the half, causing a thirty-six percent crash in Irish win probability in just one play. The Hokies controlled play in the third and fourth quarters and forced the Irish to complete an eighty-seven yard drive (and convert two fourth downs) to complete the comeback in the final minutes of the game. Irish win probability reached its lowest point on one such fourth down, needing ten yards from the Virginia Tech thirty-three yard line with fifty-two seconds on the clock. But a Book strike to Claypool for 26 yards kept the Irish in the game and set them up for the winning score.

This was an up and down game for Ian Book. He led an incredible two minute drill to seal a victory for the Irish, but his pair of red zone interceptions were a large reason the Irish needed a two minute drill to win as 17.5 point favorites. Despite these costly interceptions, his EPA was not as bad as I expected it to be for two reasons. The first is that on these drives he generated a lot of EPA before the interception, so while the interceptions were costly (-3.5 and -5.7 EPA, respectively), it offset the Expected Points he had already generated during each drive. And second, while interceptions in the red zone are still damaging, they are not as bad as most people believe. Turnovers deep in opponent’s territory often pins the opposition close to their end zone, resulting in many three-and-outs or punts, given the difficulty of driving over 90 yards. This is just what happened for the Irish, with the first turnover resulting in a Hokie punt from their own 4 yard line and Book and Co. beginning their drive on the Virginia Tech 26. They would score two plays later. While the Irish were not that successful following the second interception, they did force Virginia Tech to punt after only converting one first down. Finally, the Irish were expected to score 7.51 points on the two drives, based on the Expected Points of their position before the two turnovers. They came away with 7 on the two ensuing drives.

Despite these interceptions turning what could have been a great game for Book into an average one (FBS average on passing plays last year was .12 EPA), Book deserves credit for a great fourth quarter. He generated .21 EPA/play on 23 passing plays in the fourth, with .77 EPA/play on his four designed runs. Chase Claypool led the way after a weak performance against Michigan, and Chris Finke was also heavily involved in this one. Cole Kmet continued a lull in the production he posted early in the season, posting a modest performance with just two successful catches.

Tony Jones was out for this game and the Irish simply did not have the running backs to deal with his absence. Jafar Armstrong’s goal line fumble to close the first half was a potentially crippling blow to an Irish team that looked like it was going to pull away and take at least a ten point lead into halftime. This play alone cratered his EPA for the day, although even without it it would not have been positive. The team’s designed run EPA was awful as well since Jahmir Smith somehow failed to do much better than Armstrong. Hopefully Chris Tyree is ready for a heavy workload as a true freshman this year.

Virginia Tech couldn’t run the ball in this game either, with both their running backs generating horrid advanced statistics across the board. Their quarterback play was also terrible, averaging a negative EPA/play for the entire game. That number matches the output for the 111th ranked team last year (Nevada, out of 129). This replacement level passing and awful running was enough to generate points against an Irish team that kept gift wrapping points for them. The Hokies two touchdowns came on a ninety-eight yard fumble return and a forty-five yard touchdown drive that started in Irish territory and was aided by an immediate face mask penalty on the Irish. This is a recipe for more points than EPA would imply, and that’s exactly what happened.

The shotgun was by far the most effective formation, largely because the Irish ran a ton of shotgun on their final two drives that went eighty-two yards and eighty-seven yards. The 11 look continued to be the cornerstone of the Irish offense and was effective in this game. None of the Irish power packages worked at all, which is odd for a team that had such an excess of talent at tight end.

This was an extremely typical game for the Irish in these departments. Terrible against pressure. Play action markedly worse than non play action. I’m not sure what Tom Rees needs to do to fix these areas of the Irish offense, but it needs to happen because in every one of these recaps I’m forced to mention the inability to throw into pressure and their bad play action game.