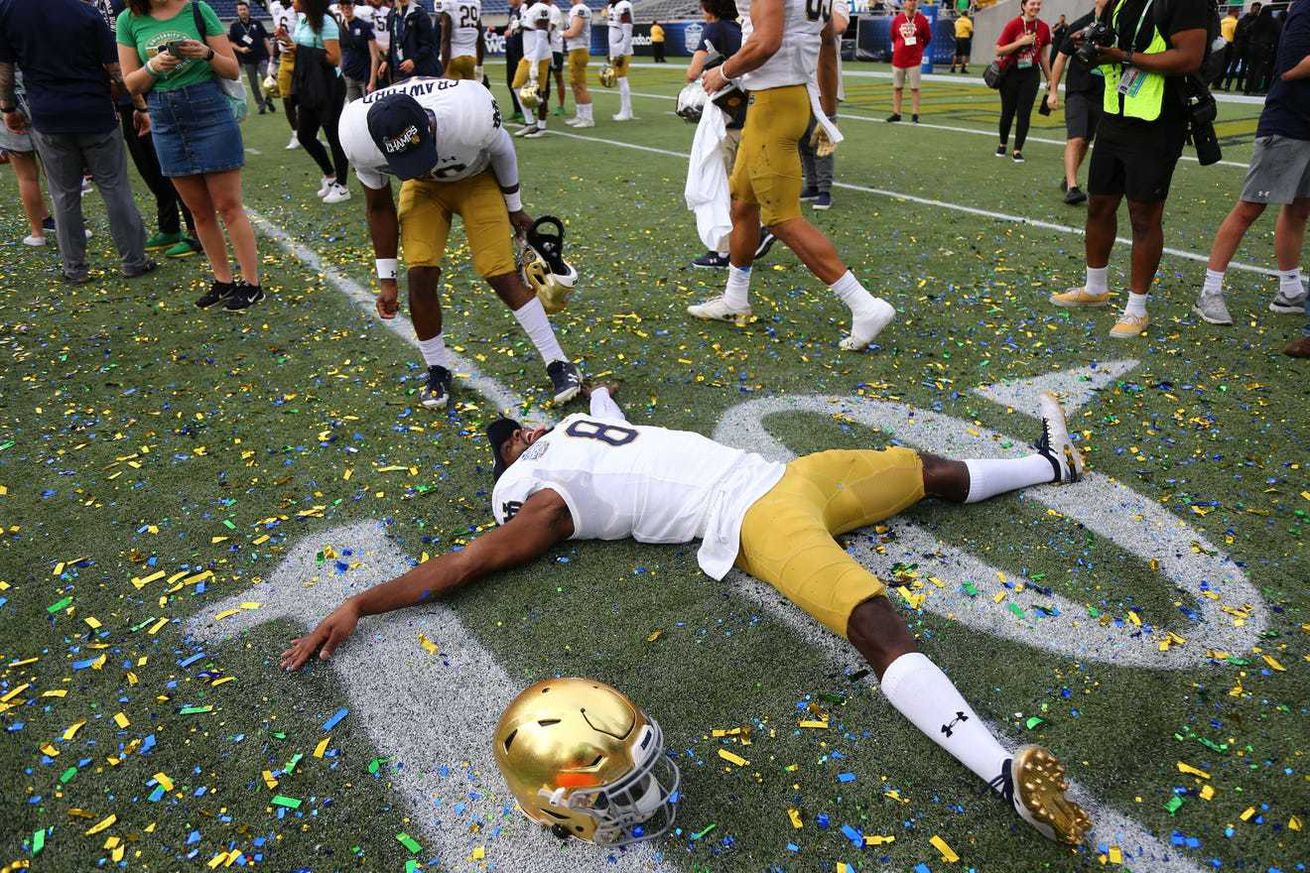 The Dawn of the Tommy Rees Era

After parting ways with Chip Long after the regular season, Brian Kelly turned to former starting Quarterback, then Quarterbacks coach and now Offensive Coordinator, Tom Rees, to call the plays in the bowl game against the Iowa St. Cyclones. The Notre Dame Fighting Irish were somewhat disappointed to draw an unranked 7-5 Big 12 team as their bowl opponent, but were only a 3.5 favorite in what many expected to be a close game. As always, please follow this link to the first installment in this series for a primer on the statistics that will be used if you are unfamiliar with the analytics that will be used.

The Irish forced critical turnovers early in this one that kept the Cyclone offense and star quarterback Brock Purdy off the field. Current Los Angeles Charger and stud special teams player Alohi Gilman recorded the first strip on a punt, setting the tone for the rest of the day. The Irish were in firm control at the half up 20-6, but put the nail in the coffin early with a long touchdown run for Tony Jones in his final game in an Irish uniform.

Ian Book was rock solid in this game, minimizing mistakes and making the most of his final game with receiver Chase Claypool. The pair were in perfect sync, with Tom Rees utilizing the short passing game to march down the field. As always the passing game behind the line of scrimmage was lackluster, but Book looked extremely comfortable throwing short out patterns that required him to step into the sideline to power the ball out. Rees was unable to get Kmet particularly involved in the offense, but they were able to take advantage of matchups in other areas and use more throws along the sidelines rather than targeting the center of the field routes Kmet usually ran.

Tony Jones’ EPA was good largely because of his eighty-four yard touchdown run early in the second half. His success rate and first down percent were still fairly low, but that one run did help his game long stats out a fair amount, as he averaged -0.34 EPA on his other carries. Remove that one run and Armstrong and Flemister actually outperformed Jones on the day. My biggest takeaway from this series by far has been that inability to effectively run the football was the biggest weakness on the entire Irish team last year. Whether this was offensive line play, running back play, or a mix of both, this needs to be figured out for this season if the Irish want any prayer of beating Clemson.

The Irish run defense stood tall in this one, holding all Iowa State rushers to negative EPA and abysmal success rates. In addition, the defense forced a critical first half turnover and limited one of the best quarterbacks in the country to mediocre play. Clark Lea has to be given immense credit for the play of the Irish defense last year. Save for a weird night in Ann Arbor the defense was good to excellent in every game. Notre Dame ranked ninth in EPA/pass at -0.06 and fifteenth in EPA/run, also at -0.06. We forget this now, but he had three new starting linebackers to work in and many analysts felt the Irish run defense could be their achilles heal. It ended up often being one of the team’s strengths.

Rees ran far more under center than Long did and had great success doing so. This will be a trend to watch for against Duke, since in last season’s season opener the Irish barely ran any under center offensive sets at all. Personnel wise getting Kmet out wide in the 10 worked like it always did, and running 21 with Kmet and Tremble sharing the field was also effective. This will be another area to watch against Duke. The Irish must replace Kmet but have several quality options at tight end to do so in Tommy Tremble, Michael Mayer, and the oft forgotten Brock Wright, and it will be extremely interesting to see if Brian Kelly makes good on his promise to run three tight end sets in non goal line situations.

Finally, look at how much better the Irish fared using play action in this game. Play action normally saw decreased EPA, Success, and First Down rates on passing plays, but under Rees the team saw improvements in all three areas when utilizing the play fake. This is extremely encouraging, and if the Irish can have a better overall run game in 2020 it will go a long way towards creating a more effective play action game as well.