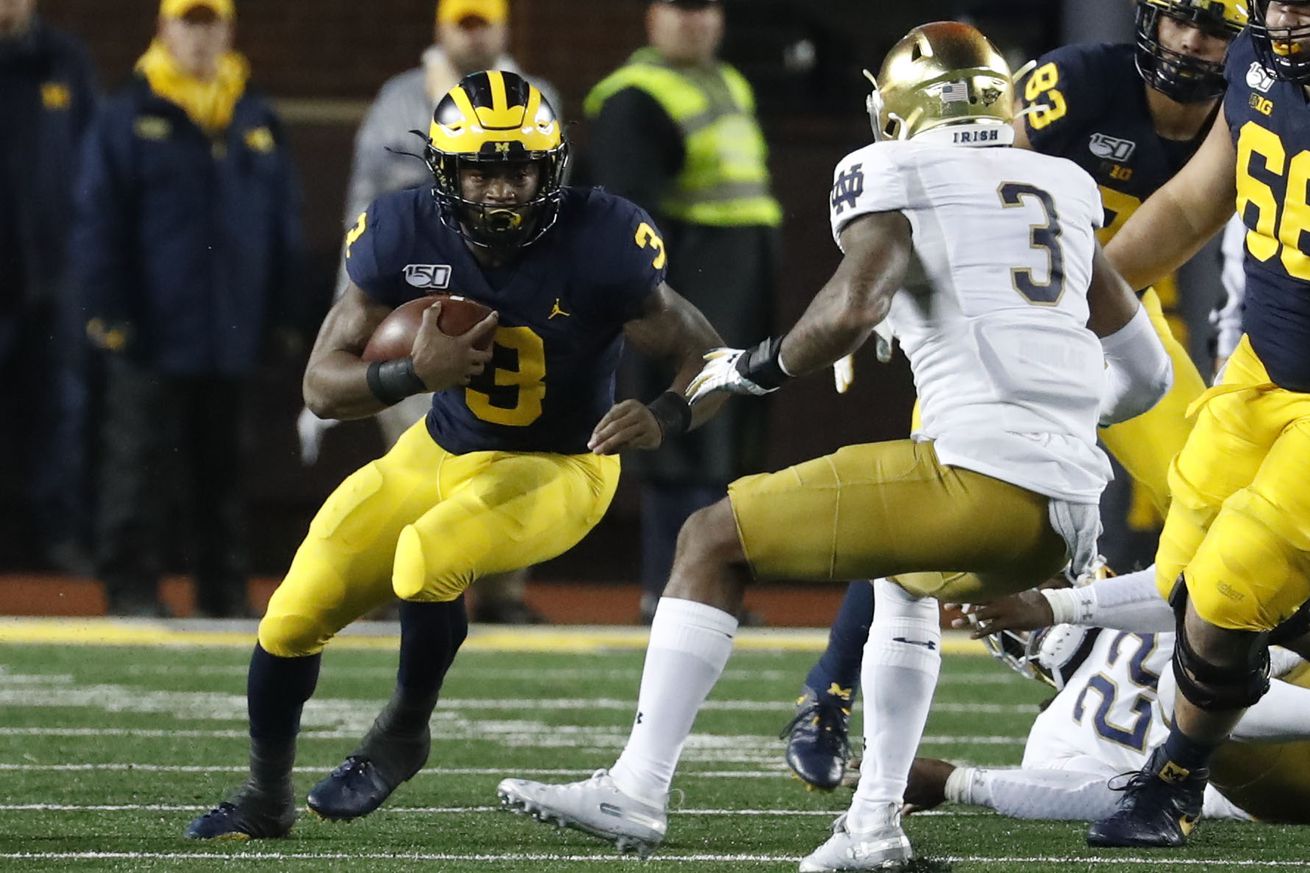 Analytics to Make You Sad

After a crucial win against USC the Notre Dame Fighting Irish travelled to Ann Arbor to add to their resume for a potential CFP bid. It was a horrible weather day, with the cold and rain forcing both teams to rely on their ground games to gain yards. The Michigan Wolverines did just that, and the Irish failed to generate anything on the ground all night. When the run game faltered they attempted to throw downfield in conditions that simply would not allow it, and the passing game behind the line of scrimmage continued to provide nothing as it did all season up to that point. In a torrential downpour, not being able to run the ball effectively or complete passes at or behind the line of scrimmage is a recipe for disaster, and that’s exactly what the Irish cooked up. As always, here’s a link to the first installment in this series for a primer on the statistics that will be used in this analysis.

The Irish turned down a major gift in the first quarter by touching a partially blocked punt back to Michigan and failing to recover the ball, eventually leading to the Wolverines’ first points in a game where scoring looked to be at a premium. The Wolverines poured it on in the second quarter, and save for one Irish drive in the third quarter (aided by an interesting pass interference call against the Wolverines) the Irish showed almost no life in the second half.

The weather made running the football a necessity, and the Irish simply were not up to the task. It was disappointing to see the run game so poor the week after perhaps its best performance of the season so far against USC. It does not matter if it’s raining, sunny, or in the middle of a tornado, getting one yard per designed run play is not going to win football games. Michigan was a good run defense, allowing the twenty-second fewest yards in the FBS last season and seventeenth in EPA/rush allowed, but one yard per carry is not good enough against any defense. This is not an excuse either given that the Irish fared better against Georgia, the best rushing defense in the country by yards and second in EPA.

Since no Irish running back produced any EPA running, the team was forced to attempt throwing in a downpour. As usual, the Irish could not do anything throwing behind the line of scrimmage. The coaches seemed to know this, because they barely tried at all with only four attempts in the game. The Irish then threw down the field, with intermediate throws having the most success but not nearly enough to dig out of the hole the poor run game and short passing games created. In the conditions that were present that day intermediate and deep throwing were simply not viable cornerstones of an offensive game plan, as evidenced by how the Irish struggled to do really anything on offense.

Once the Irish resorted to passing they failed to get Cole Kmet and Chase Claypool adequately involved in the game plan. The pair caught just four balls combined, not nearly good enough for a duo of dominant athletes like them. After the game Brian Kelly said the Wolverines bracketed Cole Kmet with two defenders and there was no way to get him the ball as a result. In college football the best teams get their playmakers involved regardless, or they take advantage of defense over committing to those star players and take advantage in other areas. You can’t say a player as dominant as Kmet was bracketed and throw your hands in the air like there was nothing you could have done.

Look at the way Michigan was able to take the ball out of Shea Patterson’s hands. Patterson attempted just thirteen passes with decent success considering the conditions, but it was the run game that did the damage. The Wolverines were not quite as efficient as I expected to see from an EPA perspective, but look how much more successful and how many more first downs their runs generated. Michigan’s first team offense wasn’t quite as good as the forty-five points indicated, but they controlled the clock and drove the ball impressively considering the conditions.

None of the three formations the Irish featured the most were even remotely effective, as Kmet was completely neutralized out wide to render the 10 formation useless. While the empty 00 set was relatively successful, it was still jarring to see the Irish coaching staff utilize empty trey as if they were unaware of the rainstorm happening around them. Michigan kept their formations far tighter and ran more power runs, and while the Irish did have some success spreading the field it felt odd to see the team do so in that manner given the heavy rain.

Notre Dame was actually better on play action in this game for the first time against Power Five competition last season. This was likely because, even though ND actually passed more than it ran, the Michigan defense was likely inclined to believe runs were coming early given the weather, resulting in more open passing windows and receivers than earlier in the season. All pressured dropbacks for the Irish were unsuccessful except one, once again continuing to be a problem throughout this season. Given the conditions and questionable game plan, this game deserves to go in the dumpster when evaluating Ian Book.