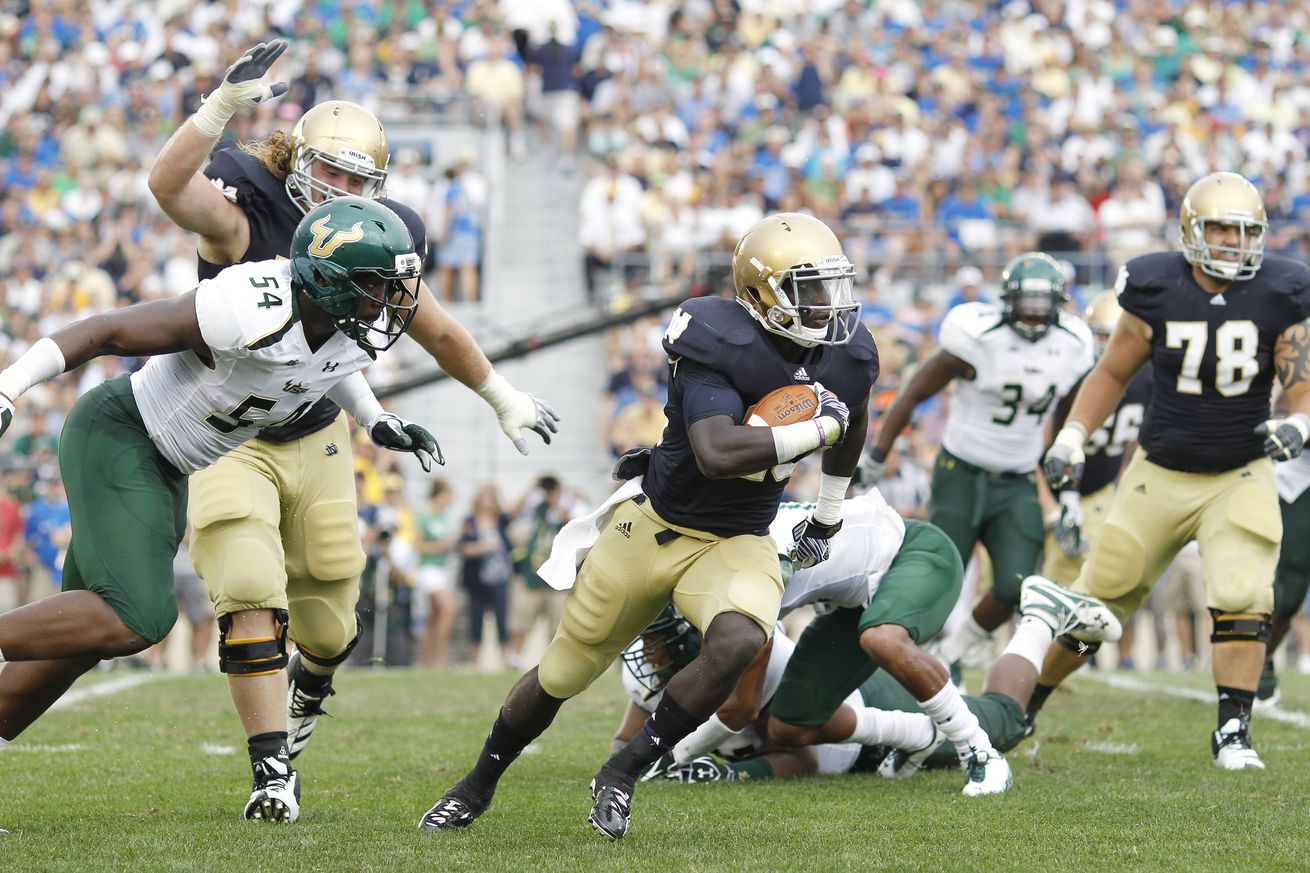 Grab the bull by the horns to cover that spread

Back with the Betting Lines Against the Bulls

Hey, guess what everybody?! The Notre Dame Fighting Irish play another football game this Saturday! It was somewhat of a strange Gameday this past Saturday with the Irish seemingly underperforming. However, our staff took a look at that through stats and analysis, letting you all know that just wasn’t exactly the case. The team did not totally steamroll Duke, so expectations were a bit shattered.

This coming week, however, is a revenge game. I have mixed feelings about this one because this week’s opponent has left a bad taste in Irish fans’ mouths for nine years now. That’s right, the South Florida Bulls come back into Notre Dame Stadium, a place they have never lost, to take on the Irish. Fortunately, it doesn’t look like Usher 800 will be called over the PA, thank God (we’ll led Mr. Jude tell you more about that, though, later this week in his weather report). Also, this Irish team has decidedly more skill and poise than that 2011 team did. Because of that, the betting lines seem to reflect that. Let’s get into the plays for this week.

This week, the Irish are hovering around 26-point favorites. As of Tuesday night, the spread via DraftKings Sportsbook is ND -25.5 (I’ve always liked there to be the .5 point — no pushes on the lines).

Additionally, the O/U sits at 50.5. Oddsshark puts the predicted score at about 42-14, the Irish landing the convincing win. In that prediction, the Irish would not only cover the spread, but the over on the points would hit.

Now, 25.5 is A LOT of points. Anytime that spreads get north of 20 points, that always seems to be a bit ridiculous and a mismatch of opponents. That might actually be reflected here on Saturday. I am hesitant to say that this is indicative of how they game will go only because I’m still scarred from 2011. However, there could be some truth to the point spread and a chance for the Irish to cover. According to Oddsshark, the Bulls are 3-3 in their previous 6 games ATS, while the Irish are 5-1. That one loss ATS was of course this past Saturday when they fell 7 points shy of covering the spread against Duke.

An interesting note, though, is that the Bulls are 5-1 ATS in their last 6 games against ACC opponents. Technically, the Irish are in the ACC this season, so the Bulls’ record ATS against ACC opponents would be affected in the outcome of the game against the Irish. Also, the total points has gone UNDER in 5 out of the last 5 games for the Bulls, and 5 out of the last 7 games for the Irish.

I started off the year 0-1-0, 0-1-0, and 0-1-0 (ATS, O/U, and DAMHSA BUA O/U). It was not a great look for me. However, I’m going to be like Big Sean (last week took an L, but this week I bounce back) for this weekend. Because of the trends that we have seen from both teams, I am actually going with a mixed bag this week. I think we see the Irish with something like a 38-10 victory with some more points scored this week. I think the Irish do get the job done, figure out some more things this week, and cover that spread. They were just feeling things out in Week 1. However, that means that the UNDER will just barely hit, but it will hit.

Finally, I’m going to set the DAMHSA BUA total at 5.5. With Braden Lenzy and some offensive weapons back after a game under everyones’ belts, the offense kicks it back into gear a bit. However, just like the total points, I’m actually going with the UNDER on DAMHSA BUAs played by the band in the stands. I always put the half point onto the spread to let there be winners and losers. However, I could truly see somewhat like 5 TDs on Saturday for the Irish. For that reason, I think we get that UNDER on Saturday TDs.

What do you think? Comment your thoughts on the spread and total as well as how many DAMHSA BUAs there will be. Also, like we’ll do every week, vote on the DAMHSA BUA O/U. Go Irish. Beat Bulls. Not today, Usher 800.