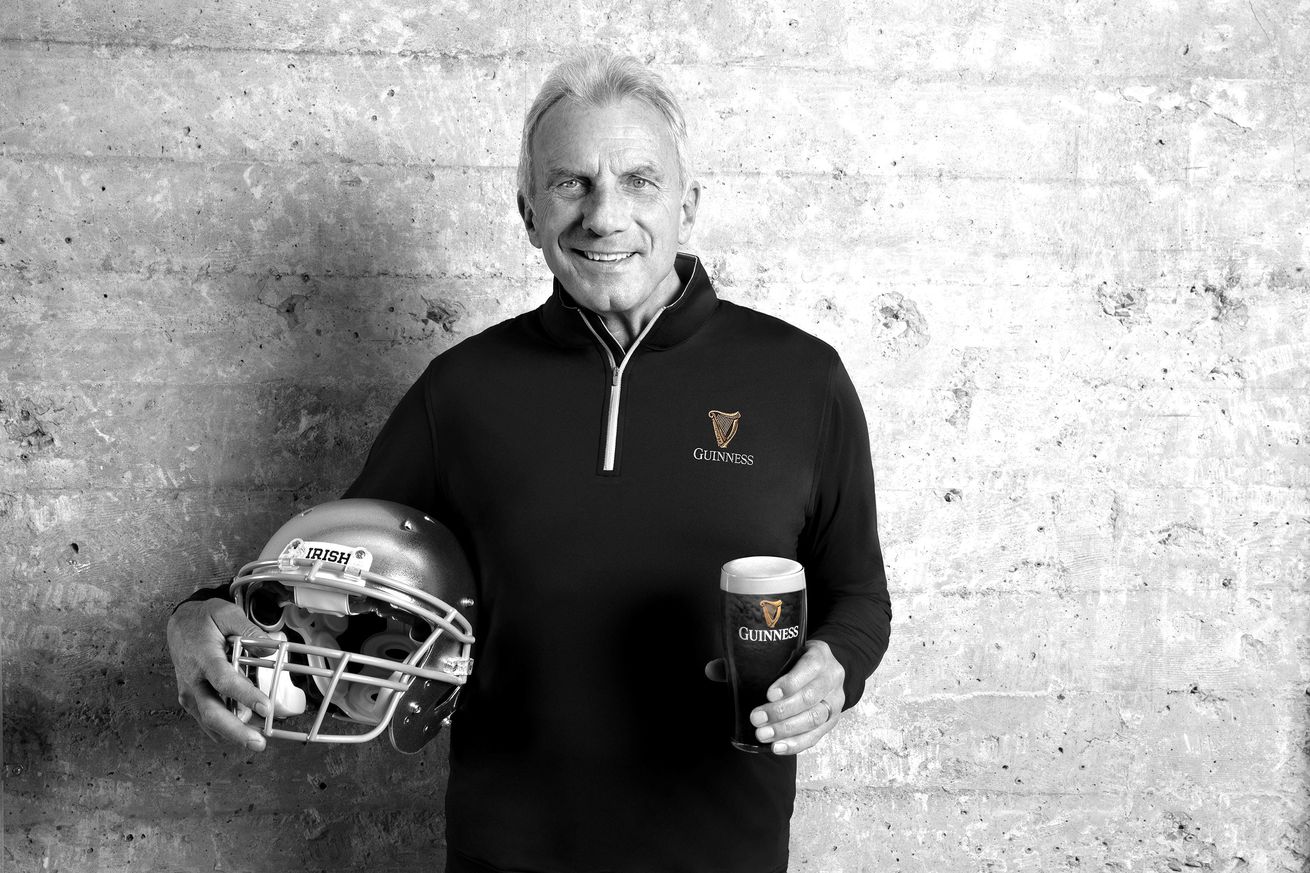 Today, Guinness announced that they would partner with Notre Dame to become the official beer of Notre Dame Fighting Irish alumni and fans. Furthermore, the announcement was made that legendary Notre Dame quarterback Joe Montana would be the national ambassador for the partnership.

As part of the partnership, fans in select markets — including Indiana, New York, Boston, and Chicago — should be on the lookout for special edition Notre Dame 8-packs of Guinness.

We were granted an interview opportunity this morning with Joe to discuss the partnership, as well as a few other things.

Q: As someone with several endorsements, what drew you to Guinness?

A: “When it was brought to me, I said I’d love to be part of it. You know I fell in love with Guinness a long time ago. My two daughters were jumping horses with my wife. Our trainers tried to talk us into going up to Ireland to look at horses over there. One of the trainers in the afternoon said, ‘It’s hot. After they’re done tying all these horses, I’m going to go get a pint of Guinness.’ I said, ‘Ok, sounds good to me.’ After that first pint, man, I would bug the crap out of Charlie and say, ‘C’mon, it’s time. I think they can do this on their own, and we’ll go get another pint.’ So, bringing the two together with Notre Dame and Guinness is a treat — between a great university and a great company with great traditions behind it and extensive ones. Not to mention the commonality with the Irish. But also, you know, looking to do a lot of the same type of things to bring people together for fun with hopes of enjoying this new venture with the anticipation of football coming back. I’m not sure it is going to happen, but we’ll see. Either way we are still out there, and we’ll enjoy sports as we see it until football comes back. And, we’ll enjoy those pints of Guinness. As we like to here at both Notre Dame and Guinness, we want to stress to do that and do it responsibly.”

Q: In addition to the TV spots and social media campaign, what other promotional activities are on the horizon for you as the national ambassador?

A: “Well, there were a lot of things that are probably on hold right now. So, we are hoping we can eventually get back to those. For now, we will social distance and all that. Probably they’ll be mostly social and hope everything goes back. But, creative is still going to work and trying to keep everybody involved. You know, like I said, it is a great partnership. I was also looking forward to going to Dublin.”

A: “Well, as a player you don’t really seem to have much of a game day because obviously you walk over, I’m not sure if it is the same, stay over in the seminary across the lake. Stay over there and walk back. You know, when my two daughters and my older son started there, it was more about the celebrations outside. My wife’s favorite part is Friday night when the band comes through. No matter where we were when it was that time, we had to find our way to the band. You know, lot of great tailgates going out there. We had some of our friends that were tailgating when I was playing that are still tailgating. You know, I think it is fun to see that tradition from that side of it. It is pretty exciting.”

Q: What was your most memorable come from behind victory at Notre Dame?

A: You know, even though I played like crap, I would say the Cotton Bowl. After being sick and coming back, it was a crazy time to play. The wind was blowing so hard. A lot of points scored, but I think only 14 or 16 against the wind. Luckily for us after I came back out after hypothermia the wind was with us, and we were able to come from behind. And then really, the Southern Cal game (1978). You know, they called it an incomplete pass, but it was a fumble. But then they went down one play later and kicked a field goal and beat us.

Q: What are your thoughts on Notre Dame moving to the ACC for the 2020 season?

A: “I think it is a test for Notre Dame. They’re trying to see if they should be part of a conference. I mean, they’ve pretty much been able to do whatever they want. I don’t know why but it seems like not being part of a conference has held them back in some of the polls. For some reason, I don’t know whether it is the games they play, if it is not playing in a conference championship, or bowl games, I’m not sure what it is. I just don’t get it. I think they are going to toe the line and see what it is like.”

Q: Is that something that drew you to Notre Dame, the fact that they were independent as opposed to a team in a conference when you were looking to go to school?

A: “Not at all. I had a dream to go to Notre Dame. And actually, when I was taking other trips around to other schools, as soon as Notre Dame offered me a scholarship, you know that’s it. I was looking forward to going there.”

Thank you again to Joe for his time this morning. With that said, go out and grab a Guinness to celebrate this new partnership!