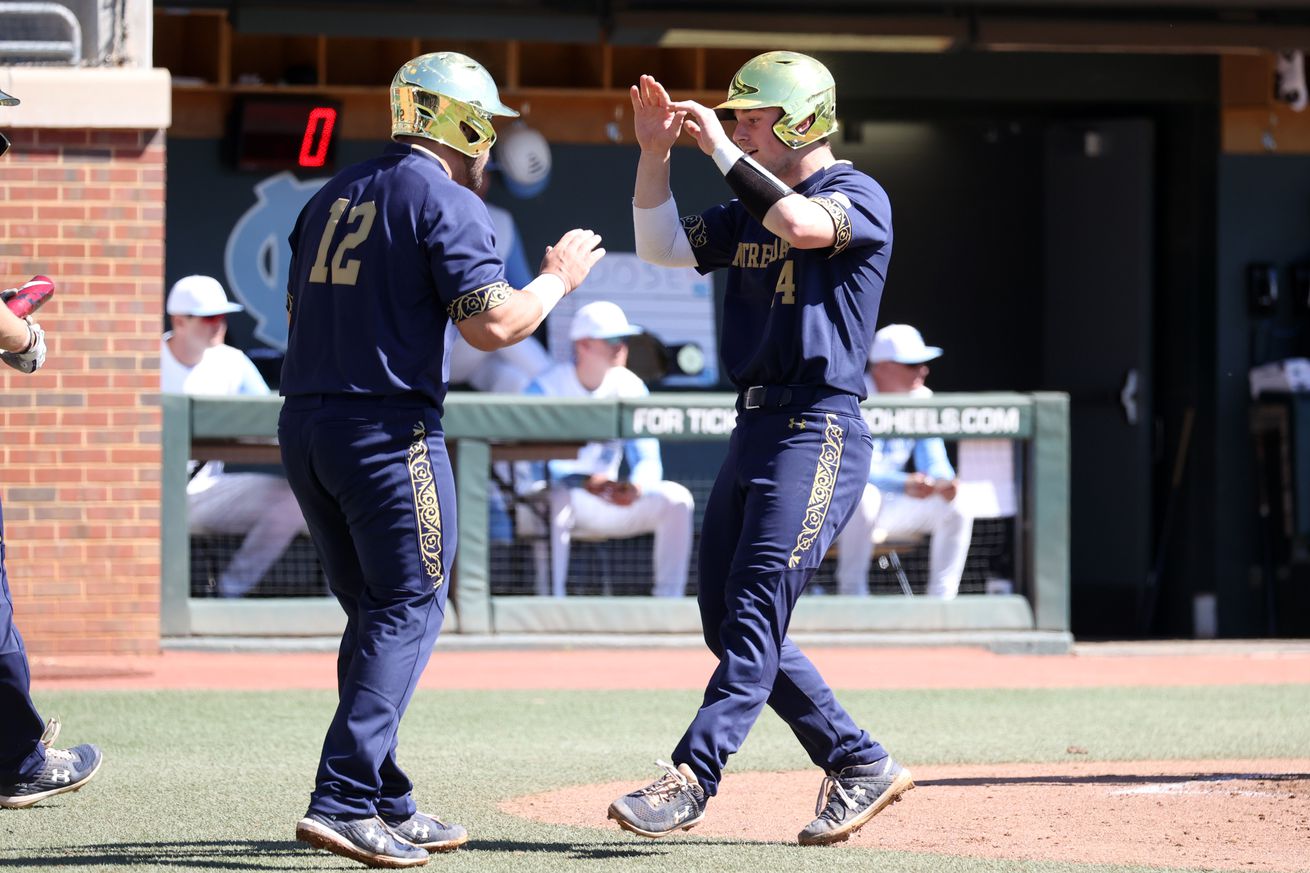 The Irish started the season 11-2 before it was cancelled. Can they maintain that success when play resumes?

Before the season was shut down, the Notre Dame Fighting Irish baseball team was on a roll. They started the season 11-2 overall and had just completed a sweep of the North Carolina Tar Heels to start ACC conference play 3-0. New head coach Link Jarrett had the team playing inspired baseball and the results were there. The big question moving forward for this team is simple, can they keep those results coming?

One thing was pretty consistent for Notre Dame early in the year, they scored runs often. In their last seven games of the season, all wins, the Irish plated 13, 10, 9, 8, 11, 14, and 9 runs. That’s an impressive stretch for a team that hadn’t even played a home game yet.

How they scored those runs is a little more interesting though. Notre Dame didn’t excel in any one category offensively. Instead they were just good in everything. One thing we notice is that Notre Dame had a SLG% of .485, good for fourth in the ACC. When Notre Dame was getting a hit, it was often more than just a single, making it a lot easier to string big innings together.

The stat that really jumps out here though is strikeouts. Notre Dame’s batters combined for just 87 strikeouts in the short season, the fewest in the ACC by almost 20, and fewer than half as many as the conference leader Florida State. On top of that, the team stole 35 bases while being caught only 7 times, good for an 83% success rate. They were patient and disciplined when they needed to be, but aggressive at the right times. They took advantage of other teams’ mistakes while not making many of their own.

The good news is that Notre Dame can return every single member of their lineup, as none were drafted and the cancellation of the season granted them another year of eligibility. The team AVG and SLG% were both above recent norms over the past few years, so we maybe can’t expect those to hold up completely, but the discipline they showed doesn’t just go away either. They can continue to be a team that doesn’t make mistakes and jumps on their opponents as so as they see the opportunity.

If there is anywhere that Notre Dame struggled, comparatively, it was the pitching staff. The Irish pitched to a 3.77 ERA and 1.15 WHIP. Not bad numbers on their own, but they ranked 4th worst in the conference in ERA. As a team the pitching staff only struck out 3.4 batters per 9 IP, which means in order to get outs their opponents were still putting the ball in play. The highest rate of the staff also belonged to Joe Boyle, the only member of the staff not eligible to return next season since being drafted by the Cincinnati Reds.

There’s also reasons for hope though. As mentioned above Boyle is the only member of the staff not eligible to return next year, and returning almost an entire pitching staff is already a recipe for success. One of the greatest strengths of the team as well was their exceptional control. As a team they only walked 1.5 batters per 9 IP and threw only 21 wild pitches in 117 innings, with Boyle also having the most on the team. They’re also a relatively young staff, with all their most common starters having several years of eligibility left. All of that together indicates a certain level of natural progression that will lead to improvement next year.

The most important aspect of sustained success is of course recruiting new talent. Notre Dame currently has four recruits in their 2021 class ranked inside Perfect Game’s top 500 players, their most since the 2017 class that brought them Joe Boyle, David LaManna, Tommy Vail, and Tommy Sheehan, all major contributors to this year’s team. They’ve also picked up several recruits in the 2022 class over the last month, including two in the top 500. Notre Dame is adding some significant talent in the next few years to a program that isn’t losing much.

Notre Dame’s quick start wasn’t quite expected, but it also doesn’t seem to be a fluke either. The Irish were succeeding this year by playing disciplined yet aggressive baseball and not making mistakes. I would certainly expect to see some regression to the mean in certain areas, but there is also new talent coming in the next few years to support an improving group of talent remaining. Notre Dame may not maintain a .846 win% and finish first in the ACC, but they’re definitely built to compete into the future.

*All statistics via The ACC and Baseball Reference