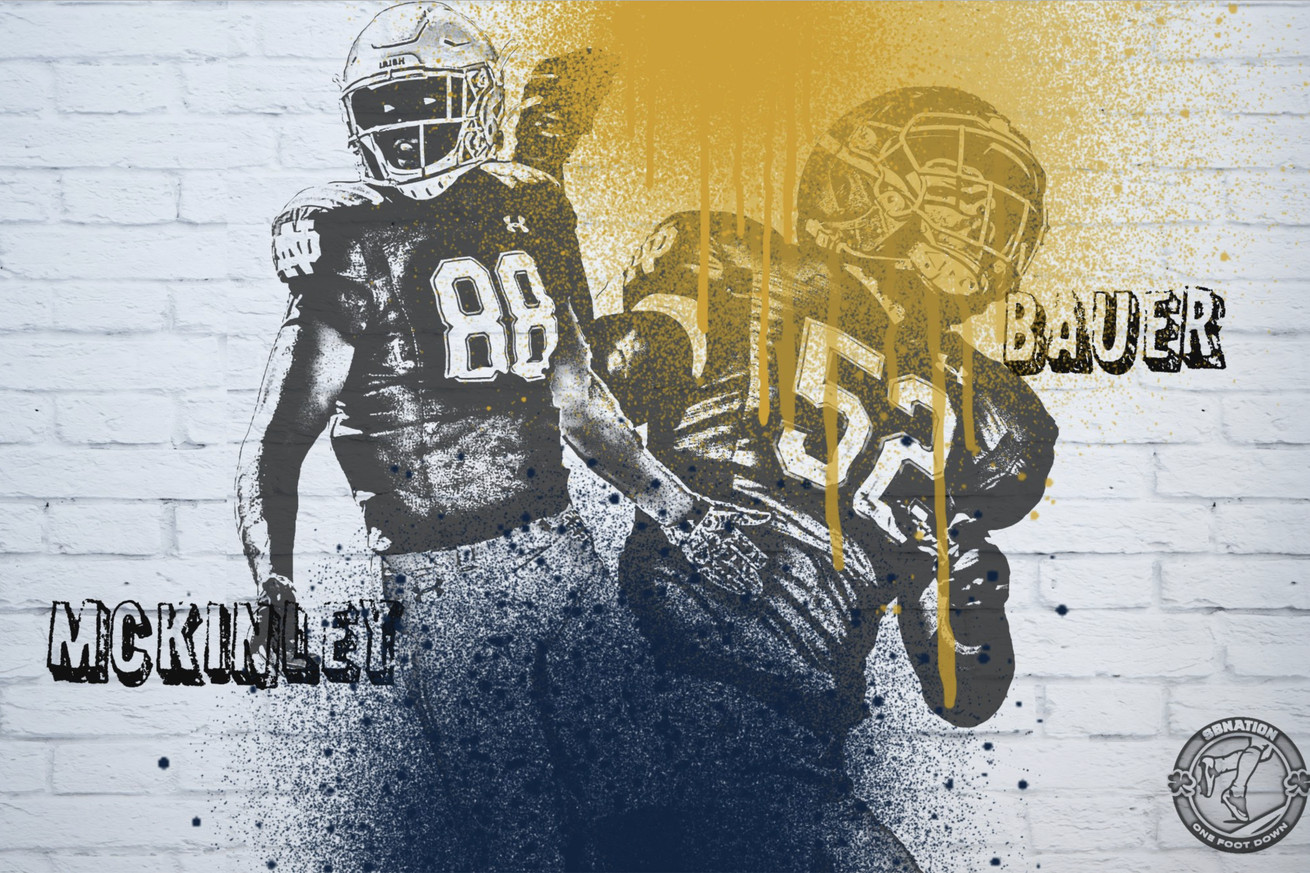 Upperclassmen in the house

Long before a football season begins, the media and fans of the Notre Dame Fighting Irish develop a fairly strong theme when it comes to which players will become big contributors. There’s also a big conversation about which player may end up being a big surprise as well. The two different topics aren’t always the same conversation — but they can be related.

After one week and one game, there are a couple of players that have shown themselves to be a big part of what this team does.

Bo Bauer has earned a special place in the hearts of Notre Dame fans as a special teams demon. The guy is a throwback in almost every sense of the word. He plays with emotion, passion, and a healthy dose of crazy. He’s just a good football player — but with the emergence of Drew White last year and a healthy crop of BUCKs on the roster, we weren’t sure how Bo fit at the MIKE.

Notre Dame and Clark Lea flipped that conversation by not only having Bo on the depth chart, but by making sure he saw plenty of action against Duke. Brian Kelly said,

“It’s the attention to detail. Bo did not play at all times in that zone that allowed him great energy and great focus and attention to detail. What Bo has done is from a mental performance standpoint and a mental preparation, he still can now play with that right energy and play focused on his assignments. Sometimes, that energy that he plays with got him outside that zone. Maybe he’d run through that A-gap when he needs to bounce and not run through the A-gap. That discipline that he’s playing with – with that energy is putting him in a really good position. Hats off to Bo in terms of putting that mental performance piece together with the athletic ability and that energy.”

It feels like Javon McKinley has been at Notre Dame forever. He was one of the highest rated wide receivers that Notre Dame has recruited in the last decade, so it has always felt that he has underachieved — and to be fair — he has. Still, he started to put some things together in his senior year to be a contributor, but an injury slowed him down at the end of the season.

We didn’t expect Javon to return in 2020, and yet here he is as a opening game starter. The return of Braden Lenzy this week will allow Notre Dame to put Javon back over to the boundary, which is a much better fit for his talents.

“That allows us to get Javon into the boundary; we think that’s a really good position for him. He’s a really good blocker, he’s got good range. You can throw him, he can win 50-50 balls. So we feel like he can do a really nice job for us. Joe (Wilkins) can flip back and forth. He can play out to the field. He can play to the boundary, gives us some great flexibility there. And from our perspective, we’ve got to get a young guy ready. Somebody’s got to step up now and accelerate their growth, whether that’s Xavier (Watts) or Jordan, somebody’s got to continue to grow. We can bounce Lawrence (Keys III) out there to the field as well. He’s had some experience at the ‘X’ position. But that’s kind of where we are at this point.”

Javon’s blocking is what really stands out to me. I realize that run blocking is one of the least sexy things a wide receiver does, but it’s vital to the running game and what can make the difference between an 11 yard run and a 67 yard touchdown.

“He’s a big, physical kid. He’s always had that in him, I just think he’s confident in what he’s doing and who he’s going up against. And the one thing about Javon, is I think he’s understanding if he’s not catching the football, he can help us in other ways. He doesn’t just have to catch the football. He saw how important he is in terms of blocking downfield and making good decisions for us in other elements. You don’t have to necessarily catch the football to impact the game in a positive way, and I think his maturity stands out in that regard and understanding that he can have an impact in the game and not necessarily have to catch five to 10 passes each game.”

Javon remains a starter according to the depth chart, but he flips over to the boundary. Bo remains behind Drew White, but as we saw last week, he should get plenty of rotational time in at the MIKE.

If these guys continue to perform well this week, that should be a good indication about how much more they will contribute to the team for the rest of the season. This is one of those fun offseason conversations that we get to see play out in real time, and I’m excited to how it works out.