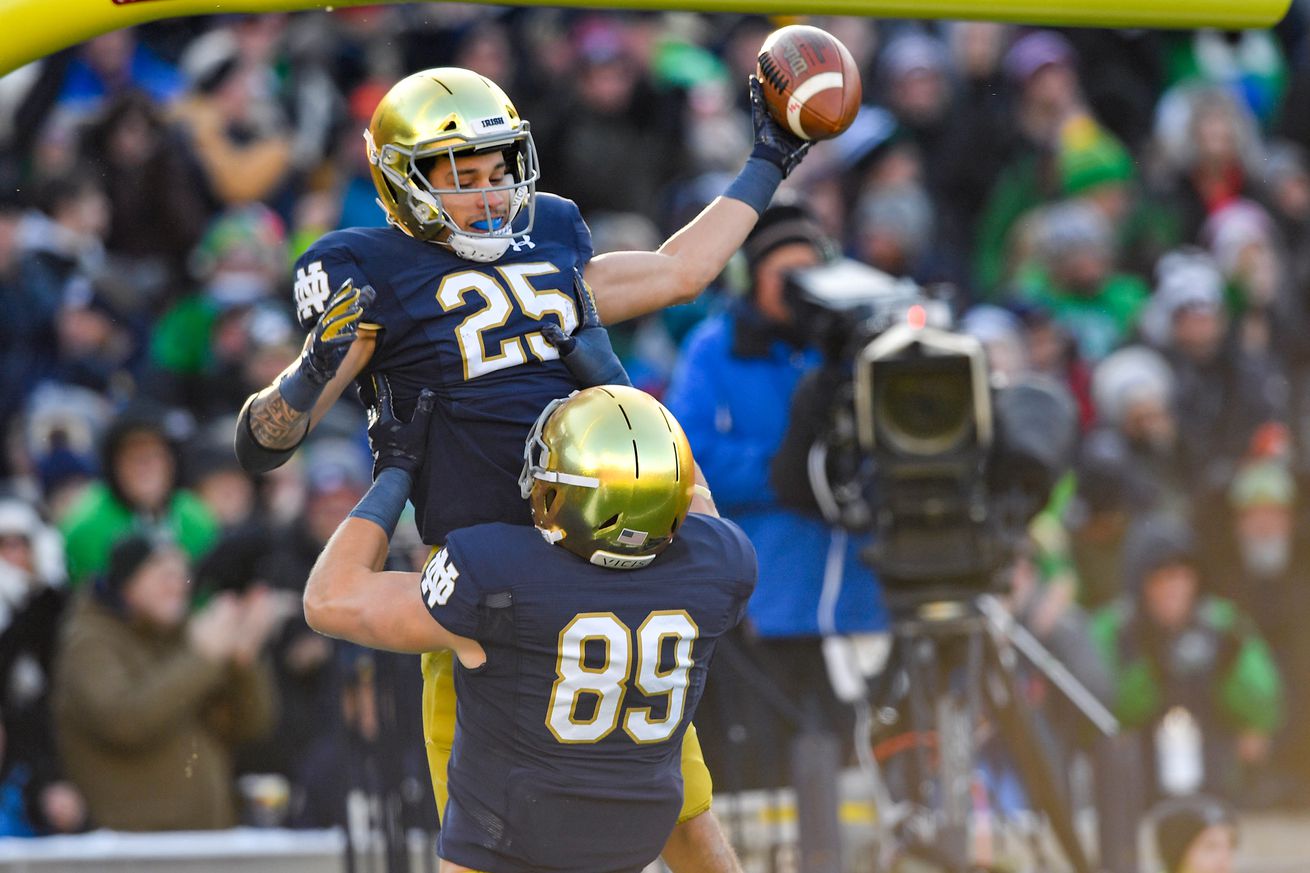 With ND’s purported #1 receiver for 2020 out for roughly 6-8 weeks after foot surgery, who should Irish fans expect to step in and contribute more in his absence?

Even though it feels like every day there’s some news that points toward the increasing likelihood that there will not be a full Notre Dame Fighting Irish football season this fall — see the latest here, RIP to MACtion — as of now the plan is still for ND to at least play that 10-game ACC slate and compete for an ACC title and CFP bid.

So, because that’s still the plan, it was absolutely tough to hear this past week that rising junior WR Kevin Austin suffered a broken foot in practice and recently had surgery, likely causing him to miss at least the first game or two of the season.

Austin, a former blue-chip recruit who sat out all of 2019 with an undisclosed suspension, was expected to be the #1 receiver in 2020, helping lead the unproven-youth charge in filling the void left by Chase Claypool, Cole Kmet, and Chris Finke in the receiving game.

Considering the timeline for recovery here is 6-8 weeks, Austin could still potentially return mid-season and fulfill that role. But while he’s out, and probably even for a bit after his return as he shakes off the rust, other Notre Dame receivers will need to up their games if Ian Book wants to have any sort of chance of moving the offense down the field through the air.

So, of all the generally-unproven and new names on the receiver depth chart, who can we expect to step up in Austin’s absence?

Ben Skowronek comes to the Irish as one of the various grad transfers Brian Kelly and his staff pulled in to bolster the depth chart in 2020, committing in early January to spend his final year of eligibility with ND after spending his first four years playing for the Northwestern Wildcats.

Skowronek only got to play one-third of his 2019 senior season, injuring his ankle after leading the team in catches (12) and receiving yards (141) through four games. Yes, those numbers through four games aren’t exactly eye-popping, but Skowronek’s production as a sophomore and junior was strong, and considering the QB talent he had to work with in Evanston, his 106 catches, 1,386 yards, and 8 TDs in his career to-date make him BY FAR the most productive returning receiver on the Notre Dame roster.

If Skowronek can be back to 100% (or close to it) in 2020, the 6’4” veteran from Fort Wayne, Indiana should provide Ian Book with a big, reliable target to lean on early in the season. There’s a chance one or two other guys could potentially earn Austin’s starting spot in Week 1, but my money is on Skowronek to run with Braden Lenzy and Lawrence Keys III, bringing some nice size to complement their small, speedy skill sets.

Braden Lenzy was already expected to step up and be a key guy in 2020.

However, considering Lenzy was still considered to be the deep-threat, end-around playmaker and Austin was considered the #1, go-to-guy wideout, Austin’s absence calls for someone else to step in as the number one option in the passing game.

Sure, it could be someone like Skowronek as a safe, reliable option, but considering Lenzy will now unquestionably be the most dynamic, talented receiver in the ND offense come opening day, maybe this injury will be a blessing in disguise for his development as more than just the home run threat.

Let’s consider the career of another guy who started out just running fly routes and doing some cool things on the ground — a Mr. Golden Tate. If you’ll recall him and his Irish career, Tate just ran deep routes as a freshman, but broke out as a sophomore and junior when he mastered route running and became an every-down, every-occasion target for Jimmy Clausen.

Why can’t Lenzy be that kind of player for Ian Book in 2020? The talk has already been around how the Irish coaches need to find a way to get the ball in his hands more this season, so why not treat him like the star wideout he can be, and feed him all over the field, and not just on deep ball or end-around situations?

I personally believe this is very likely to occur, as Lenzy was just showing flashes of what he’s capable of last season. Look for him to seize the opportunity and become the unquestioned leading receiver for the team in those first few games, and then potentially never look back from there.

Similar to Lenzy, Keys obviously isn’t impacted too much by Austin’s injury, at least in terms of playing time. The redshirt sophomore is the sure-fire starter in the slot in 2020 after he had a nice little rookie year in 2019, flashing decent hands and some good quickness/agility, as advertised. He finished last season with 13 catches for 134 yards while also running the ball 6 times for 45 yards.

And yet there isn’t a whole lot of buzz about him, as guys like Austin, Lenzy, 5-star frosh Jordan Johnson, and some of the tight ends are getting the most love as the key receivers to watch in 2020. However, with Austin removed early on as a go-to target for Book, Keys could actually be needed to step up a lot in terms of making lots of plays underneath the defense to keep the chains moving and serve as a safety blanket for Book.

He may not become an instant star, but I think Keys has the speed and experience to really do some damage from the slot, especially as teams key on some of these other guys. Look for him to be a much bigger weapon than last year, folks.

Many of us had written off Javon McKinley heading into last season, considering his lack of production up to that point and an off-the-field incident in early 2019. However, he actually was a solid contributor in the receiving rotation last year, and is the leading returning wideout for the Irish after snagging 11 catches for 268 yards and 4 touchdowns in that good-not-great season.

Unfortunately, a large portion of McKinley’s stats from 2019 came against the two worst teams on the schedule — he had 7 receptions, 189 yards, and 3 touchdowns against the New Mexico Lobos and Bowling Green Falcons, mostly showing the ability to dominate truly bad opponents, and chipping in much less against the toughest opponents on the schedule.

Still, McKinley is a boundary receiver like Austin, and like Skowronek, he’s a 5th-year veteran who has reliable hands, is a pretty nice-sized target (6’2”, 220 lbs), and could be a solid rotation piece in his final season, offering Book a familiar target and solid leadership amongst a bunch of younger receivers.

Don’t be surprised if McKinley sees a decent amount of time in 2020, and although he might not blow up like many expected when he committed back in 2016 as a top WR prospect, he may just come up with some huge catches in what could be a wild and wacky season (if it happens).

Similar to Austin’s absence giving Lenzy and Keys some chances to do more in the offense, the same can certainly be said about a couple young, dynamic tight ends that Tommy Rees HAS to be absolutely drooling over as he plans out his offense.

First, Tommy Tremble will be a redshirt sophomore in 2020, and his 2019 season gave us plenty to be excited about — in his first collegiate game, he caught 3 passes for 49 yards and a touchdown against what turned out to be a decent Louisville squad, and went on to finish the year with 16 catches for 183 yards and 4 scores, mostly just limited by the fact that Cole Kmet was also on the team, eating up the receiving tight end snaps while Brock Wright held down the blocking tight end PT.

Now, with Kmet (and Claypool and Finke) off to the NFL and this offense desperate for playmakers after Austin’s injury, Tremble seems like a no-brainer as another pick for a breakout stud in 2020. His combination of size (6’3”, 235 lbs) and speed allows him to split out and be a svelte, nightmare match-up for linebackers and DBs alike.

And then, of course, we can’t talk about potential opportunities for tight ends in the passing game without mentioning 5-star frosh Michael Mayer.

The 6’5”, 234-pounder out of Kentucky is the most hyped-up tight end recruit for ND since probably Kyle Rudolph, and with some more receptions to go around early in the season now, we shouldn’t be surprised if his sheer talent and ready-to-play body earn him some reps as another big, athletic pass catcher for Book to look for over the middle on 3rd downs and in the red zone.

The jury is out on whether 5-star freshman wide receiver Jordan Johnson will be both ready to play meaningful minutes in 2020 and also able to earn that kind of time in the rotation considering his competition for those spots, but his talent is pretty undeniable — the 6’2”, 180-pound wideout from St. Louis was a top-50 recruit in the rankings of every recruiting service, and there’s really nothing he doesn’t do well — he’s got good speed, good hands, decent size, and runs routes and blocks pretty well.

I wouldn’t expect Johnson to suddenly become a starter or anything this season, but this could give him the chance to earn some real PT early on, gain some confidence, and set him up to be a regular contributor later in the season and definitely as a sophomore in 2021.

Let’s Wrap This Up

Overall, the loss of Kevin Austin for the rest of practice and the beginning of the season is rough. He’s a talented receiver who appeared to be putting it all together, based on reports from practice, and looked set to lead a young and unproven receiving corps in 2020.

However, his injury/surgery definitely opens up some opportunities — whether it means direct playing time for guys like Ben Skowronek, Javon McKinley, and Jordan Johnson, or just increased opportunities for receptions and to step up and do more, like in the cases of Braden Lenzy, Lawrence Keys III, and tight ends Tommy Tremble and Michael Mayer.

It should be fun and very interesting to see who in the above group takes a leap in 2020 and takes advantage of the opportunity, potentially enabling a very questionable group heading into the year to be viewed as a very dangerous group by late in the season (similar to what happened with the Irish linebackers in 2019).