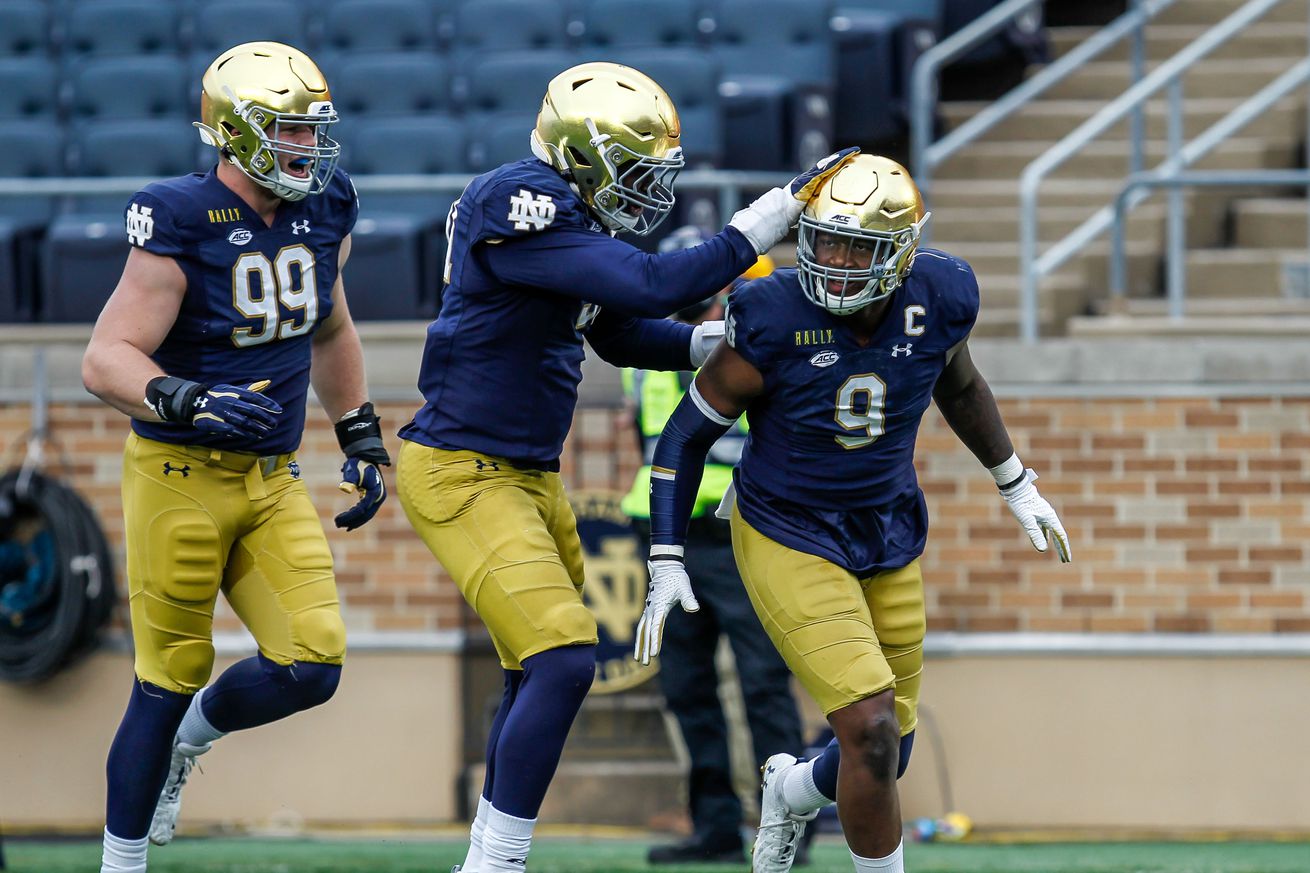 The Notre Dame Fighting Irish won a 12-7 game against the Louisville Cardinals and you’re probably expecting to see a lot of stuff out there trashing the offense. Notre Dame only managed 12 points, 339 yards, and a whole lot of frustration.

The Notre Dame passing game was completely terrible today, and the blame can be directed in all directions. The offensive game plan reminded me more of the Vanderbilt game from 2018 (or even Ball State). I liked that Tommy Rees tried to start the game by pushing the ball down the field — but it just didn’t work. A strong combination of wind, blitzing Cardinals, and an indecisive Ian Book made this one of the more inefficient games threw the air over the last few years.

Still, they kept getting into the redzone — thanks in large part to the running game. Despite 4 sacks, Ian Book was able to rack up 48 yards on the ground and score the only Irish TD on the day with a 13 yard run.

The Irish are back on top with Book taking it all the way himself! #LOUvsND pic.twitter.com/LpythZvjZP

Kyren Williams ran for 127 yards to help a 232 yard effort from the Irish. Hardcore RTDBers will understand that the running game today got Notre Dame a 12-7 win that would have been like a 24-17 loss not too many years ago.

But yeah… the offense did not play to the standard — regardless of reasons, weather, and excuses.

The defense is a different story all together.

After an uncharacteristic game against Florida State, the Irish defense was tasked with stopping a Louisville offense that is fast, athletic, and plenty of playmakers on the perimeter. They completely answered the call here by only giving up 234 yards to Louisville (just 2 more than Notre Dame ran for) and 7 points.

Brian Kelly said a couple of times after the game that the defense still needs to learn to get off the field on 3rd down, and the defense only allowed three 3rd down conversions on 9 Cardinal tries. Notre Dame did allow a 4th down conversion, so maybe Kelly was still stewing about that.

Daelin Hayes was asked if the defense talked about having to win a game like this and Hayes replied:

“Yeah, at about 2:37 — when the game started. That’s the mindset we have every time we go out on the field. We tell the offense all they need to do is give us 3 points and we’ll go do the rest.”

Today the defense needed 8 points from the offense, but I think you get his point. This is a confident group, and they showed today they have every reason to be.

If there’s a real knock on this defense it’s that they don’t force enough turnovers — and it’s true. Even today against a team that has turned the ball over a lot this season, the Irish defense failed to get a turnover. Honestly, it makes the yardage and the points allowed today even more impressive.

Maybe I’m just a product of 42 years on this earth, but I was told that running the football, and stopping the run (the Irish only allowed 96 yards on the ground to Louisville) are the keys to most football games. I’ve also been told — by credible sources — that defense wins championships.

While the offense certainly scared the shit out of Irish fans today, the defense should be used as your safe word. We wondered if they would get back into form after FSU, and they did. Celebrate that.

Everyone wants to continue to put the microscope on the Clemson Tigers and make everything about that game, but that’s not how football works. Things change week to week and every opponent provides some type of new challenge. Notre Dame failed that challenge offensively today, but it didn’t matter — not with the only stat that matters today.

Notre Dame won a 12-7 football game. A game that needed a solid running game and a really stout defense. I’m good with that today. Next week may be a different story, but TODAY it was enough to go 4-0 on the season.

Obviously you’re not a golfer.