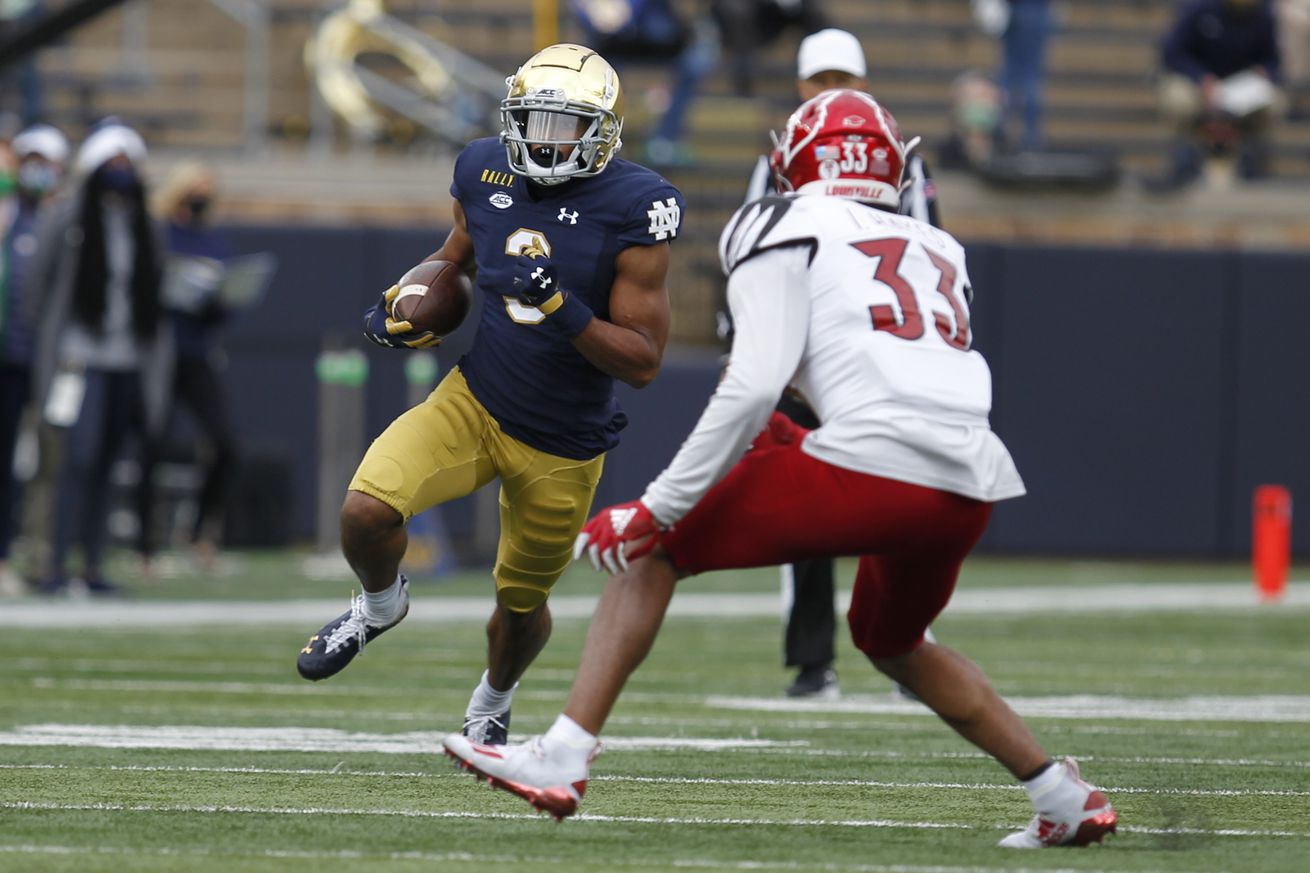 Winning is hard and forever will be

Brian Kelly spoke with the media after a 12-7 win for the Notre Dame Fighting Irish over the Louisville Cardinals.

BRIAN KELLY: We’re excited about the victory. Winning is hard. Proud of our football team. Their preparation was outstanding during the week. I thought they came in with a mindset that was such that they knew this was not a 1-3 football team they were playing today.

Louisville played extremely well. Coach had them ready to play. They took care of the football. I think I commented earlier in the week that I thought they had beaten themselves quite frankly, and they easily could have been 4-0. They played like a 4-0 team today. We withstood that.

I think the things we have to do better, obviously if you watched the game, red zone. Obviously we’ve got to score touchdowns and not field goals. Then we’ve got to get off the field on third down. Those are the two things we talked about. We got to be better there. We’ll certainly spend time in those two particular areas in working to be better and more efficient.

But there were a lot of really positive things to take from this game. Continued to execute well at the line of scrimmage. Some guys stepped up and played some plays today. Again, we closed out the game for the second consecutive week. I think we had the ball, last drive was what, eight minutes, closed out the game. A lot of positive things to take from it.

It’s our 22nd consecutive win at home. I don’t want our guys to lose sight of that. That’s a great achievement. I don’t think (Ian) Book has lost at home. A lot of those guys don’t know what it’s like to lose at home. I want them to keep that.

With that, we’ll let you move on to questions.

Q. There were some big third-down conversions in the last drive. Ian had a terrific scramble into the end zone. How would you evaluate his game overall today?

BRIAN KELLY: I think you evaluate, again, based upon the body of work. Certainly there are things that he can get better at.

Look, he wins. I get asked the same question each and every week. He’s a winner. He wins football games. He hasn’t lost at home. I thought when it’s time to make plays, he made huge third-down conversions on this last drive.

When the game is on the line, you can count on Ian Book to come up and make big plays for us. That’s a good feeling to have.

I’ve coached a lot of games over 30 years. I don’t know that I’ve been in one quite like this. I’ve been in a 12-7 game when it was a stinker. You’re like, Eew. But this game was a little different. It was hard-fought.

Again, from our perspective, it was the inability to cash in in the red zone. Then a couple of plays that we need to make, right? We got to make a catch in the end zone. We got to make a third-down stop. That’s kind of the difference in this ballgame or it looks a little bit different at the end.

I just reminded them the preparation was outstanding. Their mindset was great. When you’re a top-five team in the country, you’re going to get the opposition’s best game, period. That was not a 1-3 football team we played today. That was a team that played their absolute best, took care of the football. They were minus eight coming into the game. They did not turn the football over.

Hats off to Louisville.

Q. When you sent the offense back out there with just under eight minutes left, how confident were you or did you think they would be able to milk the clock all the way down like you were able to?

BRIAN KELLY: Yeah, I mean, I think the way the game had gone, I felt pretty confident that we were going to be able to at the very least put our defense in a very good position. We weren’t going to leave them out there where they would have to defend a short field.

We had been running the ball with pretty good effectiveness. We clearly had an idea of what we needed to do in this drive. We slowed our tempo down quite a bit. We let that clock tick down.

Again, I think there was a lot of confidence amongst all the guys that were out there, including the coaches, that we were going to be able to get that thing ended in our favor.

You’re building your football team off of these types of games, these kind of gritty, tough games where the game is in the balance in the last seven, eight minutes. Certainly they’re very teachable. We’ll learn from it.

Q. What went into the decision to attempt the fake field goal in the first half? Was it a concern about points being at a premium throughout this game?

BRIAN KELLY: No. On film, in film study, we felt like there was a vulnerability there. We felt like it was going to go for a touchdown or I wouldn’t have called it, coupled with the fact that that was the time to take a shot at it.

Yeah, I mean, I just think from our film study, our preparation, we worked on it all week, I felt good. I felt like that was the right time to take a shot at it. Yeah, I mean, the only thing you can question is the distance, how far it was.

The rationale behind it was that the way it was set up, we felt like it was a play that we’d go for a touchdown.

Q. From 30,000 feet here, you’re about a third of the way through this season, you’re in the top five, you’re 4-0, you maybe haven’t had a top-10 test, but you have been tested. Where do you think this team is right now?

We’re going to be a better football team as we continue to grow and develop. Yeah, this team is nowhere near where it can be and where I think it will be.

But we know that we’re going to have to improve in certain areas on the offensive side of the ball and defensively, in particular the two areas I mentioned. We’ve got to make some plays to be more efficient scoring touchdowns in the red zone. That’s play-makers making plays. Then defensively we need to get off the field on third down. Those two areas will be areas of great focus moving forward.

Q. Ben (Skowronek) had two catches today, both of them on third downs. How important can he be as a safety blanket late in the series?

BRIAN KELLY: I mentioned him in postgame. Ben had been certainly somebody that we were counting on. He’s been injured really and hasn’t been able to fully engage. It’s nice to see him contribute. I know he’s excited.

I don’t know that he wants to be called a safety blanket, but he’s certainly a guy that we’re going to count on moving forward. It’s good to see him back out on the field contributing. He’ll be a guy that will continue to improve for us and make plays for us.

Q. What’s the key to making more big plays going forward? Or did Louisville do something to limit that ability for you guys today?

The weather conditions weren’t great today and conducive for that. It’s like anything else. When you’re dealing with a team that loads the box, you got to make some plays on the perimeter.

Today wasn’t probably the best day for that. Those guys got to make more plays on the perimeter for us. We’re running the ball effectively enough, we’re getting some good

play from the tight ends. Those guys got to continue to grow, and they are. They’re working hard in practice.

Ian has to get them the football. That will be something that we continue to focus on. I’m quite certain they’re going to get there.

Q. In a game where both teams had seven offensive possessions, what adjustments are you making in the contest if you realize you’re not going to unleash everything you have on Louisville’s defense?

BRIAN KELLY: Well, obviously we knew that this was a game that was going to center around taking care of the football, making good decisions in play calling, field position.

You’re just making sure that you’re not putting yourself in a position where you leave yourself vulnerable to a turnover or a sack or sack fumble or something that can change the momentum in the game.

You’re making sure that you’re protected, your edges. Saw a lot of two tight ends. It’s a 3-4 defense, you want to protect your edges. We went with a lot more six-man protections.

You’re very cognizant of those types of things in a low-scoring football game in which we were a part of today.

THE MODERATOR: Thank you very much, coach.