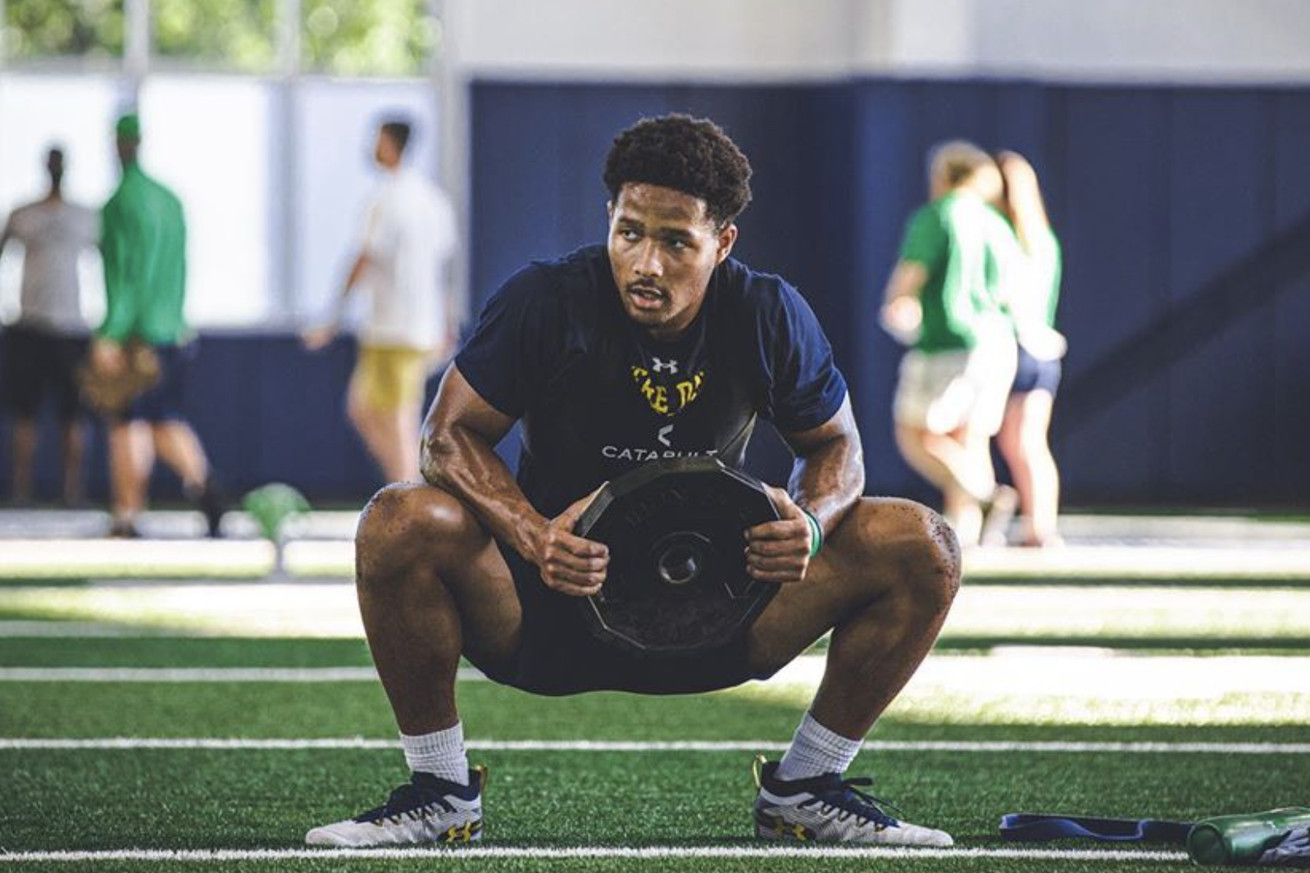 While Notre Dame Fighting Irish beat reporters have been as limited as everyone else when it comes to viewing practice, there have been no shortages of “sources say” coming out of fall camp. From all parties involved, one thing has become abundantly clear — Chris Tyree is balling out. The concern for some (not me) was that Tyree, while fast (4.3 forty time), was going to be too slight at just 179 pounds to be more than a gadget player as freshman. Well you can throw that out the window, as reports are that Chris showed up into camp bulked up, the good kind of bulked up, and is looking to be as close to an every down back as you see in college football 2020, per Brian Kelly in an August Zoom press conference:

“He’s not a specialist who just plays in the slot or hand-off sweeps, he’s a guy who can run the football downhill between the tackles too”

What this means, is for the first time in the Brian Kelly era, we are going to see what the rest of the college football world seemingly gets to experience — immediate contributions from a talented freshman running back.

In 1972, the NCAA allowed freshman to compete in football for the first time since the Korean War. In 1973, Pitt running back Tony Dorsett came in as a freshman and set the sport on fire, running for on 1,686 yards. Notre Dame saw this first hand in their national championship run, while beating Pitt 31-10, Dorsett still turned in a 209yd performance. A quick peak at the NCAA record books furthers the story. Ron Dayne, Ricky Williams and Tony Dorsett are one, two and three in career rushing yards. All had immediate impacts as freshman, Dayne specifically, ran for 2,109 yards as a freshman! But for my money, the phenomenon of the freshman running back started in 2002 with Maurice Clarett.

While he didn’t post the volume or yards of either Dayne or Dorsett, his presence on the 2002 Ohio State team directly contributed to them winning the national title. Without Clarett, they likely aren’t playing Miami in the title game as they lose to Michigan without his 119yards and touchdown on a day they totaled just 240 yards and two scores. After that, the floodgates for freshman running backs opened. Some notable performances include:

Couple of things jump out looking at this full list. Brian Kelly, your running back recruiting…woof. Secondly, you cannot ignore the season Josh Adams turned in but you need to put it in proper context. 573yds and 82carries of Adams totals came after CJ Prosise left the Pitt game with a concussion and was banged up the rest of the way.(Prosise had just 9 carries the rest of the year) This is all to say that Kelly’s comments from 2 weeks ago is eyebrow raising.

“I don’t know that we’ve had a freshman in Tyree that can come in and carry the football. That doesn’t happen quite a bit.”

Kelly is readily admitting that Tyree is different, so the question is…does that difference show up on the stat sheet this season?

The Case for Chris Tyree

Let’s make no mistakes here, I have been consistently pounding the drum for Chris Tyree. Back in February I went on record during the OFD Podcast and said if Tyree didn’t touch the ball ten times against Clemson, I’d eat a hat. I’ve been extremely high on Chris Tyree since before he was signed. I said this back in an article I wrote in January:

If Brian Kelly and the new OC can’t figure out a way to utilize this for 7-10 touches a game, then I am at a loss.

Do I think that Chris Tyree is going to turn in a JK Dobbins, Jonathan Taylor or Saquon Barkley(182 – 1076yd) freshman season? I don’t think so. He’d need to come into fall camp about 10-15 good pounds heavier (needs to weight at least 190) to handle that kind of work load.

Well guess what? He came into fall camp 10-15 good pounds heavier. He’s going to handle that kind of work load. I was bullish on 7-10 touches back then, I am fully on board with 15-20 touches now. Is that absurd? No. Let’s review shall we:

The odds are SOMEONE is going to come out of that running back room and touch the ball 15-20 times and someone else is going to average 7-10 touches. I happen to think the person who averages 15-20 is now Chris Tyree. I believe this for a couple of reasons. First off, he is the fastest running back in that room, they are going to actively find ways to use that speed. He’s also someone who lined up in the slot in high school, and his pass catching acumen has been noted by scouts. Plus what about the following running backs and their returning production makes you think that Tyree can’t come in and win this job right away?

Am I missing something here? It’s not like he’s looking up and a loaded backfield like Georgia’s D’Andre Swift was 2017(He managed 618yds on the ground that season). Why are schools like Ohio State, Georgia, Wisconsin, Oregon, Penn State, South Carolina, all able to figure out ways to get elite freshman RBs touches? Hell, even Michigan had a true freshman in Zach Charbonnet lead them in rushing last year. I could feel each one of his two TD’s he punched in against the Irish last year in my gut.

The baseline here is the Irish play 11 games, can they play 12-13 games? Sure, but for the sake of this exercise let’s say 11. Using previous numbers and workload, I believe he’s going to rush the ball 14 times a game, which puts his rushing total at 154 attempts. 5 times in the Kelly era has an Irish running back averaged 14 or more rushes. He should end up averaging 1.5 catches a game as well, putting him at 15.5 touches a game. What do those numbers look like you ask? Well let’s take a quick peak at Notre Dame’s opponents and their rushing statistics from a year ago:

Half the schedule is against teams ranked between 100-130th in the nation. So much for joining a conference for strength of schedule… So the competition is more bad than good. Also, since the 2014 season, the lowest average yards per attempt that the leading rushing for Notre Dame has posted was 5.91 by Josh Adams in 2016. Am I to believe that with 5 returning starters(6 is you count Lugg) on offensive line, facing a schedule with some of the worst rushing defenses from a year ago, that the most talented running back Brian Kelly has recruiting at Notre Dame is going to average the lowest yards per attempt since Tarean Folston’s 5.08 in 2014? No. I am putting that number to just eclipse Tony Jones Jr’s 5.95 from a year ago and say that Chris Tyree will average 6.0ypc. Bringing his final stat-line to: