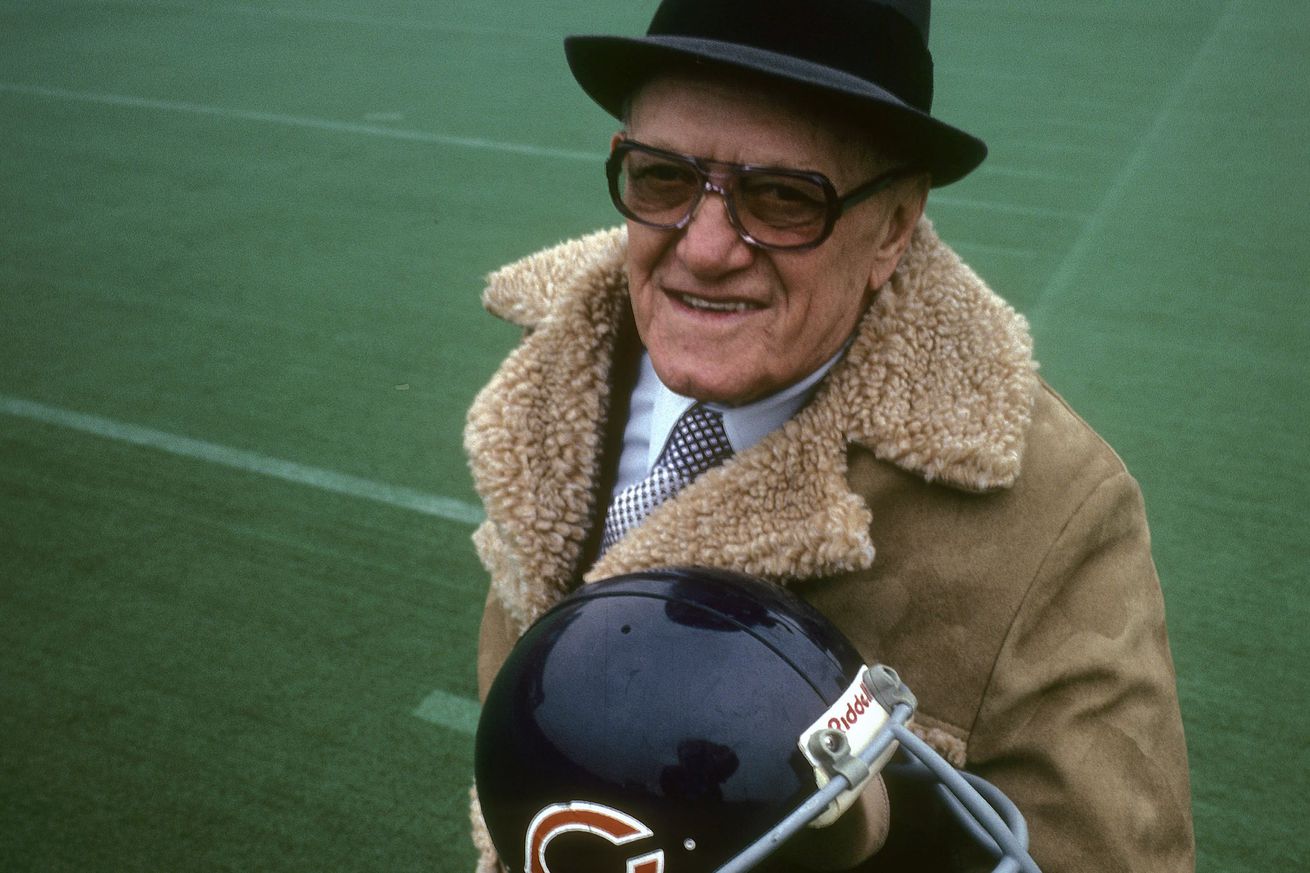 Photo by Focus on Sport/Getty Images

With negotiations between the Chicago Bears and the city Park District at a seeming impasse, the NFL team and the University of Notre Dame discussed — 40 years ago this week — bringing the Bears to South Bend.

The friction between the Chicago Park District, which controlled Soldier Field, and their tenants had existed since the Bears first occupied the stadium in 1971. The professional team had worn out its welcome at Wrigley Field, and were blocked from using Dyche Stadium, home of the Northwestern Wildcats, for its home games.

George Halas Sr., owner of the Bears, appeared to have two standing offers prior to the 1971 season — to Comiskey Park, home of the Chicago White Sox, or for Soldier Field, controlled by the Chicago Park District.

As the Chicago Daily News’ Ray Sons noted in March 1971:

Halas has referred to Soldier Field in the past as “an abortion” because only some 19,000 of its 100,000 seats are between the goal ines and the sidelines are a country mile from the first row of seats.

By May, Halas and the Park District had agreed to a three-year lease with two one-year options, if necessary. The Park District agreed to a $700,00 face lift to accommodate their new tenants, including synthetic turf; new, closer seating; and new dressing rooms.

Dan Shannon, the park district’s president, told the Chicago Tribune when the deal was consummated that “the renovation of the South Side arena on the lakefront would be accomplished ‘without costing the taxpayers a single dollar.’ … The Park District expects not only to avoid soaking the taxpayer, but actually making money on the deal.”

The Bears, according to the Tribune in May 1971, “view the move to Soldier Field as purely temporary — an interim measure taken of necessity until a new city stadium can be erected.”

In January 1975, the Madison Square Garden Corp. announced it would halt plans for a 5,000 unit residential development at Arlington Park Race Track and, instead, determine the feasibility of erecting a sports stadium on 20 acres of undeveloped land.

The Daily Herald, in its Jan. 3 edition that year, wrote:

The Chicago Bears have signed a lease with the Chicago Park District to play their 1975 games in Soldier Field, with an option to renew that lease for the 1975 season, Halas said. But the team’s owners say they are not happy with the agreement with the park district.

Halas Sr. attended an Arlington Heights Village Board meeting that May and told the trustees and residents that “he is prepared to sign a 35-year lease to use an 80,000-seat stadium at the track ‘if the people of Arlington Heights welcome us.’”

By September, however, the idea was placed into “indefinite postponement,” the Herald reported, “because of uncertainties in the present municipal bond market.”

With the Arlington proposal in limbo, Halas Sr. sounded hopeful about his team’s current residence.

“We have a standard-two year contract with a one-year option. We’ll have to negotiate for 1977,” the owner told the Chicago Tribune in October 1976. “We want to stay in Soldier Field. They’ve given some thought to remodeling.”

The ambitious improvement plan, estimated to cost between $40 million and $55 million, was championed by Mayor Richard M. Daley, but subsequently sidelined after his unexpected death in December 1976.

Patrick L. O’Malley, the Park District chairman, said he told Chicago Mayor Michael Bilandic in November 1977 that Soldier Field was deteriorating so steadily that they could only accommodate the Bears for one additional season. The District had sunk more than $7 million into slowing the decay, but they were unwilling to pay for any additional “stopgap” measures.

“Who’s going to pay for it is the question and I don’t think anybody in politics wants to put his name on any tag asking for X number of million dollars to build a facility,” Ed Kelly, the Park District superintendent, told the Chicago Tribune in November 1977.

Halas Sr. said he had talks with both Northwestern and Bill Veeck, owner of Comiskey Park, “but we can’t survive at either place on a permanent basis.”

“In other words, we don’t know what we’re going to do,” Halas Sr. told the Associated Press in November 1977. “We do not have the slightest idea.”

One year later, Kelly declared the 10,292 seats at the field’s north end to be no longer safe — which would bring the Bears below the NFL’s 50,000 seat requirement if torn down.

“Halas said he is content for his team to play at least the next two seasons in Soldier Field — and ‘I hope it’s 20,” the Chicago Tribune’s Robert Davis wrote in December 1978.

George “Mugs” Halas Jr., the Bears president, admitted to the Chicago Tribune that the Bears didn’t have much leverage.

“We don’t even know whether a place like Notre Dame would let us in,” he said.

While Park District President Raymond Simon was threatening to close Soldier Field if the Bears did not sign a 20-year lease, Halas Sr. was, at least publicly, unperturbed.

“It will be resolved,” the owner told the Chicago Tribune in January 1980. The Bears were so confident that they advertised individual ticket game sales with “increased seating capacity,” the Tribune added.

The disagreement boiled down to, unsurprisingly, money. The Bears were willing to pay nearly twice as much as they paid to the district in 1979 — and equal to, or better than, any other NFL club paid to its landlords. But the district was still facing million dollar deficits.

The Park District declared the two sides to be at impasse by June and Simon threatened the following month to “evict” the Bears if they did not have a lease with the club.

“I got a letter from George Halas dated July 1, offering practically the same terms they presented last Feb. 18,” Simon told the Chicago Tribune on July 9. “They haven’t budged an inch. I consider it outrageous that the Bears will benefit from a 20-year lease and still want the right to walk away from it any year they want.”

The district used its remaining leverage three days later when it blocked the Bears from selling tickets at Soldier Field, just three days before single game passes went on sale and 43 days before the Bears’ first home preseason game.

One week after having their Soldier Field ticket event scuttled, Bears executives were on the phone with Notre Dame Fighting Irish officials.

Both parties set a meeting for July 16, 1980 to discuss playing the Bears’ two preseason games — Aug. 23 against the Cleveland Browns and Aug. 30 against the St. Louis Cardinals — at Notre Dame Stadium.

“It’s getting to be ridiculous,” Halas told the Chicago Tribune of the spat with the Park District. “We’re not asking for any favors. If the city of Chicago grants us a favor, it’ll be the first one.”

The Tribune reportedly heard that Notre Dame would host the exhibition games, with Comiskey Park handling the regular season affairs.

“Gee that’s a thought,” Halas quipped to the paper on July 15.

Finks, the Bears general manager, meanwhile told the Associated Press the same day that Notre Dame was the only alternative site under consideration.

“We’ve told them (Notre Dame) of our dilemma,” Finks said. “But they have made no commitment.”

Joe Doyle, the South Bend Tribune’s sports editor, dismissed the whole idea of the Bears relocating as an idle threat. Writing in the July 16 edition of his paper, Doyle said:

Would or could the Bears move to Notre Dame? Athletic director Ed Krause of Notre Dame says he wasn’t contacted directly by the Bears about a possible rental of the Irish stadium for Bears games this year. Chairman of the athletic board Rev. Edmund P. Joyce is away from campus and presumably, he also hasn’t been talking to the Bears.

The logistics of the Chicago Bears playing at Notre Dame would be interesting and impossible. The Bears have sold more than 50,000 season tickets, mostly to business firms and individuals in Chicago. To move 50,000 people from Chicago to South Bend for a game would not only boggle the mind, but traffic as well.

Notre Dame has great parking facilities for its games. It has great traffic control. But for a college game, the parking lot totals seldom go about 12,000 automobiles. A Bears game might require 20,000 or more automobiles.

There is a fallacy that Notre Dame is supported only by Chicago fans. Relatively few ND season tickets are sold to Chicagoans. Some buy individual game tickets. Other Chicagoans are guests of South Bend people, but it is probably unusual that 5,000 fans from Chicago are ever in the stadium for a game. John Redden, who has been involved in the parking operation at Notre Dame for years, says, “the north flow (toll road east and west, plus Niles and Michigan traffic) seldom goes above 2,200 cars.”

Moving 5,000 people to South Bend for a game in one thing. Moving 50,000 would be — as Joe Kuharich used to say — a horse of a different fire engine. When the Bears played a preseason game here in 1972, it attracted less than half a stadium.

On July 16, the Bears offered Notre Dame two exhibition games and eight regular season games for the 1980 season — with the presumption of continued loggerheads with the Park District. No deadline was disclosed, according to a UPI report the following day.

On July 17, the Bears reached a new 20-year lease agreement with the Park District. Simon, the district’s president, proposed to the Bears that they finance the $2.8 million cost of building 54 skybox suites at Soldier Field instead of adding a 50 cent surcharge to tickets. Halas agreed.

“Undoubtedly, we’re now paying the highest rental by far in the NFL, but I’m happy that Bears’ fans can watch us play in Chicago, where we belong,” Halas said at a joint press conference with Simon. “If this agreement hadn’t been reached, we would have gone to Notre Dame.”

Thomas, reached this week, said he had no recollection of Bears-to-Notre-Dame talk.

“Hearing about it now, I know that I would have loved the opportunity to play there as a Bear,” wrote Thomas, who played for the team from 1975 to 1984.