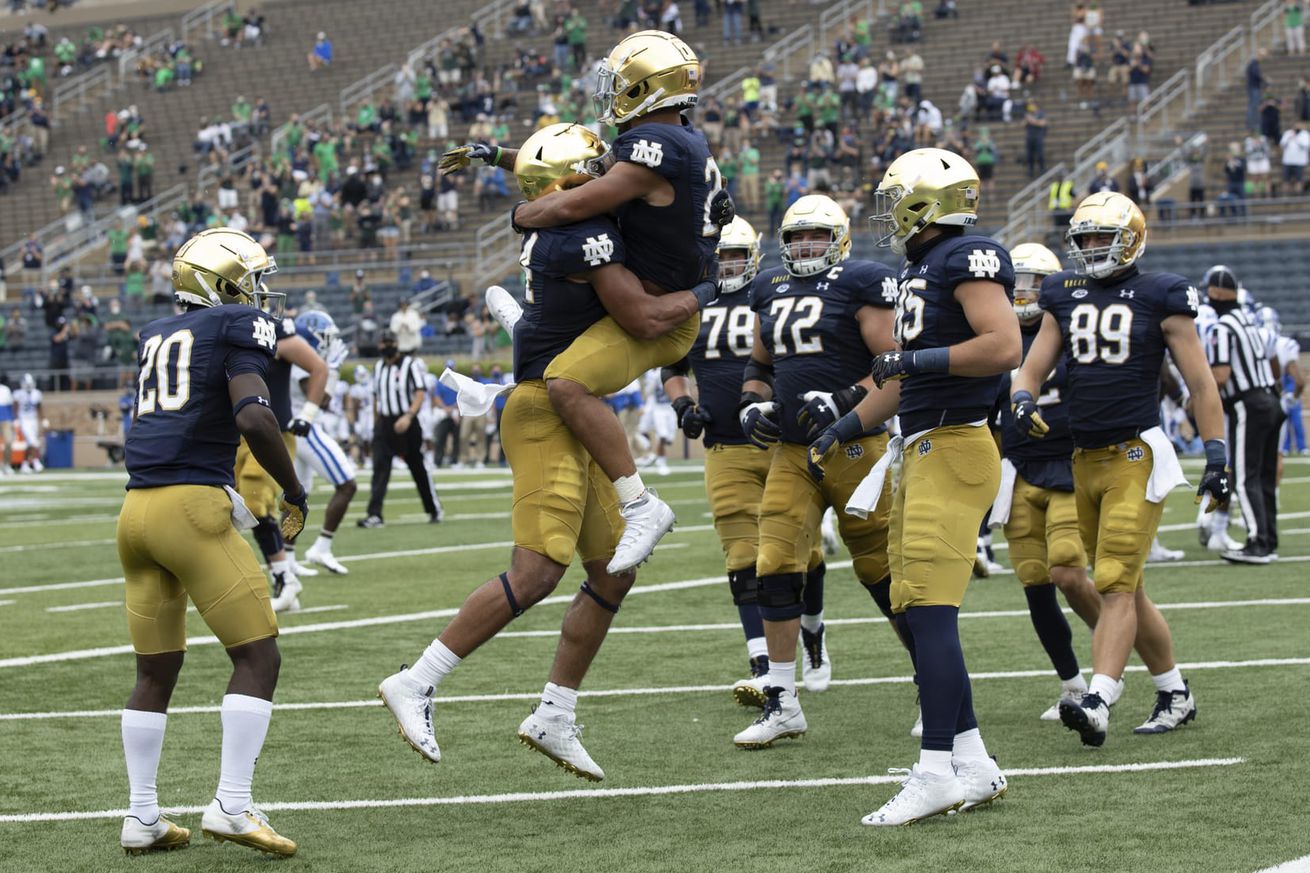 After a long offseason that saw the world explode and the Notre Dame Fighting Irish join a conference, Notre Dame Football and analytics driven recaps are back. These articles will be published on Tuesdays following every game this season, giving you a different numbers-driven perspective on Notre Dame football. If this is your first time reading, please follow this link to the first installment of our 2019 recaps for a one paragraph explanation of the stats you will be using to understand Notre Dame football on the highest plain of enlightenment.

Starting with three straight three and outs is not advisable for increasing your win probability, but Clark Lea and the defense held strong to keep Duke from taking a strong grip while the Irish offense floundered. After a back and forth second quarter, Kyren Williams’ fourth down touchdown run put the Irish in control in the third quarter on a high leverage fourth down play that would have had major win probability implications no matter what happened. Duke made things interesting with a late third quarter touchdown, but failed to show any life in the fourth as Irish win probability steadily climbed to 100% with back to back scoring drives.

Welcome to the Irish offense Kyren Williams! Williams turned it on on the ground in the second half, averaging 1.11 EPA/play on seven carries after a -0.25 EPA/play first half into a ton of stacked boxes. Williams looked explosive, and also broke a screen pass behind the line (an area of spectacular weakness for the 2019 Irish) open for a seventy-five yard gain. Williams far outperformed Chris Tyree on the ground, and poor Jafar Armstrong continues his streak of negative EPA performances from last year. Tyree will likely become more involved as he acclimates to college football, but it is the Kyren Williams show in South Bend, and the analytics are in favor of it.

For all wondering who would step up and replace Claypool and Finke, the answer in this game was no one. With Braden Lenzy hampered by an apparent hamstring, Irish receivers caught just 34.2% of Ian Book’s passing yards in this game. This figure was 70% in 2019, with Chase Claypool alone hauling in 27.8% of Irish passing yards. The Irish receivers as a position group barely eclipsed Chase Claypool’s share of production last year, let alone attempting to replace Chris Finke and replicate production from returning players. This has the potential to be a massive issue, but with the imminent returns of Lenzy and Kevin Austin, as well as Book developing chemistry with his new weapons, the passing game should only get better from here. On the flip side Baby Gronk, I mean Michael Mayer, had an impressive debut, averaging 1.3 EPA/Play and converting all three of his catches into first downs.

This was not a great game for Ian Book, producing negative EPA on his drop backs (including scrambles) and throwing a crucial red zone interception. However, this was far from Book’s worst performance and the early play calling from new offensive coordinator Tom Rees hampered Book. Rees insisted on running on first down early in the game. First quarter first down runs went for just 1.5 yards per carry, putting the Irish in 2nd/3rd and long situations that made Book’s life difficult and resulted in three straight three-and-outs. In the second quarter Rees opened up and the Irish flourished, passing on first down 10 out of 13 times and averaging 16.2 yards per attempt (9.7 without the Williams screen) and 0.21 EPA/play on those drop backs. Conversely, the three second quarter first down rushes went for 1 yard per carry and -0.24 EPA/play. Simply put, run-run-pass play calling is not going to work for this Irish group when they are getting 1 yard per carry on first down. Book faced a lot of 3rd and longs in the first half, and this put him in a position where many quarterbacks would struggle.

In addition to the early runs, the lack of play action plays left points on the field for the Irish. Book and the offense were extremely effective when using the play fake, generating an additional 0.3 EPA/Play over regular drop backs. Despite this, the Irish used play action on just 18.2% of drop backs, far below the college football average of 24% and below the 30.7% play action rate Duke used in this game. Chip Long dialed up play action on 30.7% of passing plays last season, while in the bowl game Rees called for it on only 21.4% of drop backs. Play action usage is trending in the wrong direction for the Irish under Rees as it’s the most efficient type of pass at a playcaller’s disposal. He would be wise to lean into it and trust his star studded offensive line to provide the needed protection to execute play fakes.

The Irish were statistically excellent throwing behind the line (largely driven by long screens to Kyren Williams and Jafar Armstrong). It is encouraging to see positive EPA/play behind the line (a rarity in 2019) but Book did look extremely uncomfortable in this area, whizzing uncatchable passes at Kyren Williams at high speed from short distances. Book’s weakness on these touch throws was covered up by the big plays, but manifested in his inefficiency throwing between 0-9 yards. This is the bread and butter of Ian Book led Irish offenses, and was the most common throw depth in this game as well. Part of this could be due to the lack of trust in his receivers and their inability to get open. Nonetheless, Book needs to get more comfortable in the pocket and executing short throws in the future.

As projected in the preview, Deon Jackson was unable to generate offense on the ground, generating negative EPA/play rushing as he did in both his 2018 and 2019 seasons. The Irish were particularly stout against the run on first down, forcing Duke into longer situations that required throwing on obvious passing downs. Noah Gray and Jalon Calhoun both did some damage in these situations, but did not have the kind of monster games needed to topple a heavily favored Irish team. Constantly having to throw on 2nd and 3rd and longs as the Blue Devils did makes it difficult to convert first downs. Stopping the run early forced Duke into these situations, and the revamped secondary held up when it needed to. Also, will teams ever learn to stop throwing at Kyle Hamilton?

For all the talk of how bad Ian Book supposedly was in this game, Chase Brice had worse numbers across the board, especially on critical third down throws. Also unlike Book his performance got worse as the game went on, struggling mightily in the second half with just 4.3 yards per dropback. Brice was surprisingly efficient throughout on designed runs, though. Brice averaged .63 EPA/play on his five designed rushing attempts finding the endzone on a third and goal QB draw and scrambling for 23 yards on third and ten on their final drive. This is something to keep an eye on, since Trevor Lawrence ran for 0.57 EPA and 8 yards per carry on eighty-two touches against FBS competition last year. Everyone knows all about his arm, but he has the ability to torch the Irish on the ground if they take a weak approach to containing the quarterback as they did on Saturday.

The Duke Blue Devils were more efficient on play action as most teams are, and look at how often they used it. Even on a day they were not running efficiently they reaped the benefits of an effective play action game frequently. The reason for this is defenders are taught to read their keys and almost always play the run first. So despite knowing about their anemic rushing attack, the Irish defense still bought on the play fake and opened up throwing lanes for Brice. Tom Rees should take notice and build more play action concepts into the Irish game plan, especially since teams may focus even more attention to the run with the emergence of Kyren Williams.