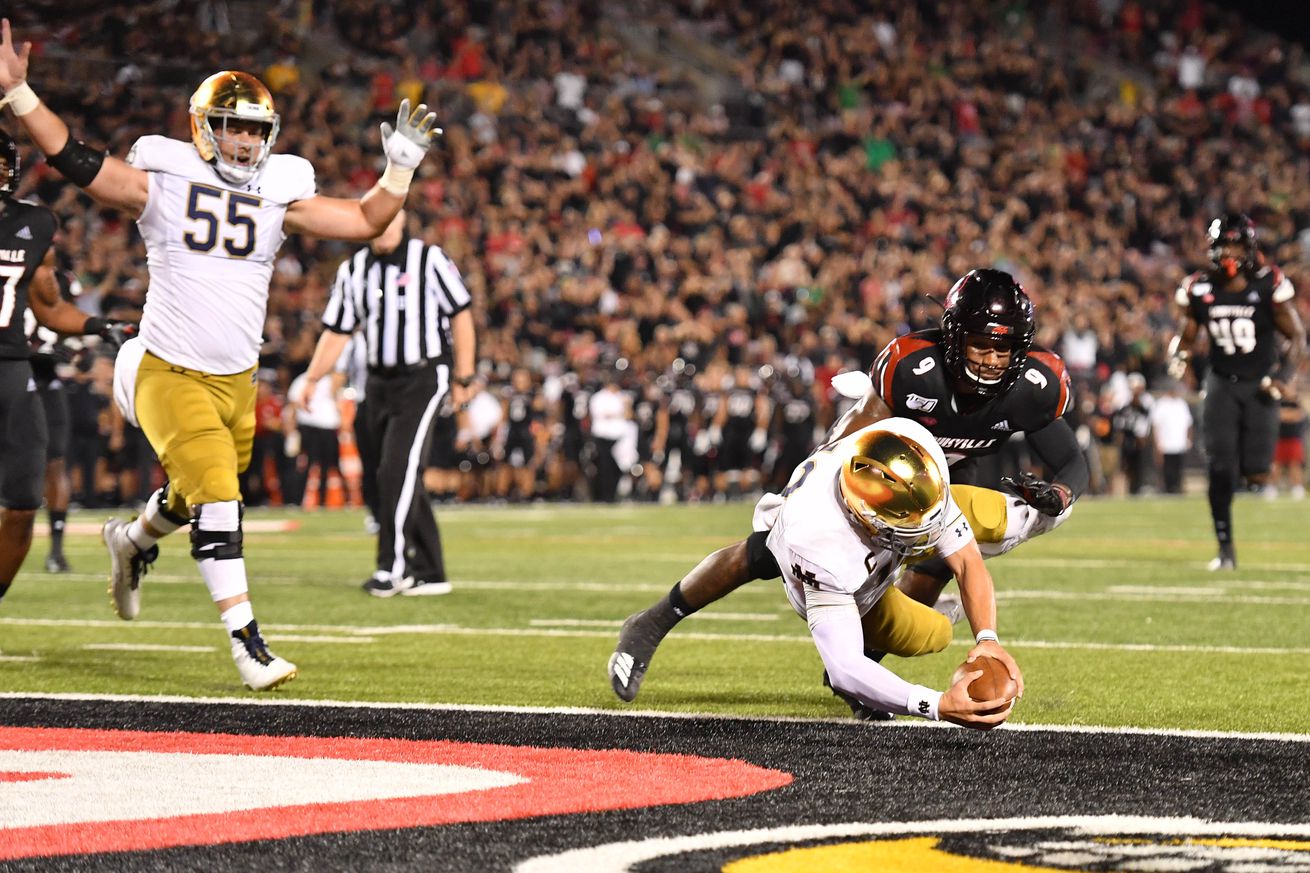 Some Statistics to Make You More Smarter

As we all wait anxiously to hear the fate of the 2020 season, Cooper and I are taking an analytics driven approach to deep dive into the 2019 season to learn more about last year’s team and the future of the Irish program. Beginning with Louisville we will recap each game, using advanced statistics to uncover more than the conventional box score can reveal.

Before we begin, here is a quick primer on some of the metrics we will be using.

For example, if the Irish are in a 12 formation, this means there is one running back, two tight ends, and two wide receivers on the field since there are five ineligible offensive linemen and a quarterback on each play. For this analysis, this is based on alignment, meaning that Cole Kmet can be considered a running back or wide receiver based on where he aligns at the snap. In the future, we will use specific player based tracking (counting Kmet as a tight end wherever he aligns) as well as alignment based tracking.

Now that you are ready to analyze advanced statistics like a pro, let’s begin with the game’s win probability chart.

The win probabilities in this chart do not take into account team strength, just purely the state of the game in terms of the score, down and distance, and time on the clock. The Irish had a rough start to their season defensively, giving up back to back touchdown drives of eighty-eight and seventy-five yards in their first game trying to replace Jerry Tillery, Drue Tranquill, and Te’von Coney among others. Once Louisville jumped out to a 14-7 lead to push Irish win probability below 20 percent, the Irish responded with a quick touchdown to even the odds, then put the pedal down in the second half to take complete control. Louisville quarterback Jawon Pass had three fumbles in the contest, each one causing large upticks in Irish win probability.

These are box scores focused on individual players’ EPA from all the plays they were involved in and a chart comparing Book’s EPA by target distance. It was a mediocre start from Book through the air as he seemed to come out a bit shy in his first game. Book scrambled on a season-high 26.5 percent of his drop backs and only threw two passes twenty or more yards down the field. Book was successful on short conservative throws, especially targeting the middle of the field on drags and slant routes. Chase Claypool and Tommy Tremble were the team’s most efficient receivers, with Tremble snagging an twenty-six yard touchdown pass down the seam greatly adding EPA to his total.

Louisville quarterback Jawon Pass’ fumbles cost his team points. He ended up with negative EPA both throwing and passing, a testament to how well Clark Lea’s defense played. Louisville’s running backs didn’t fare much better as Asmar Bilal, Drew White, and Jeremiah Owusu-Koramoah completely controlled the run game in their first game together as linebackers.

One concerning trend early is the EPA from designed run plays was not where it needed to be. After losing Jafar Armstrong to injury, the team relied on Tony Jones and Jahmir Smith to carry the load, and the team failed to run the ball efficiently. This was a problem that plagued the Irish all season, as running the ball with Jones was relatively inefficient all year and Armstrong never settled into a groove after his injury. While the run game was not horrible in this game, early signs of the Irish inability to run the ball against better competition like Georgia and Michigan were present.

Despite Cole Kmet being out due to injury the Irish deployed a fair number of two tight end sets with Tommy Tremble and Brock Wright sharing the field. These sets were the least effective for the Irish, and the coaching staff took note. The share of snaps with two tight ends on the field decreased from 24.6% in this game to 4.6% against New Mexico, a massive drop likely due to its ineffectiveness in this game. Wright was relegated back to fullback duties and playing in mostly heavy sets, a role he is more suited for as the great blocker that he is. Wright could probably be a vertical threat route running tight end at many schools, but being stuck behind Kmet and Tremble did him no favors.

The Irish had a ton of success lining Tremble up in the backfield to create a 20 personnel look. Cole Kmet would do this frequently after he got healthy. Ironically, the Irish deployment of zero tight end sets actually peaks in the middle of the season when Kmet was at full strength because he was utilized in so many different ways by then offensive coordinator Chip Long.

Finally, here is Ian Book’s EPA by pressure. Book struggled when pressured in this one, failing to record a single successful play against pressure on seven pressured drop backs. After watching all of the snaps last season to record the stats needed for this series, I felt Book greatly improved in this area as the season went on. He had a tendency to panic and scramble early that faded away as the season progressed. This progress was earned the hard way, as he constantly felt pressure after Tommy Kraemer and Robert Hainsey suffered injuries later in the season.