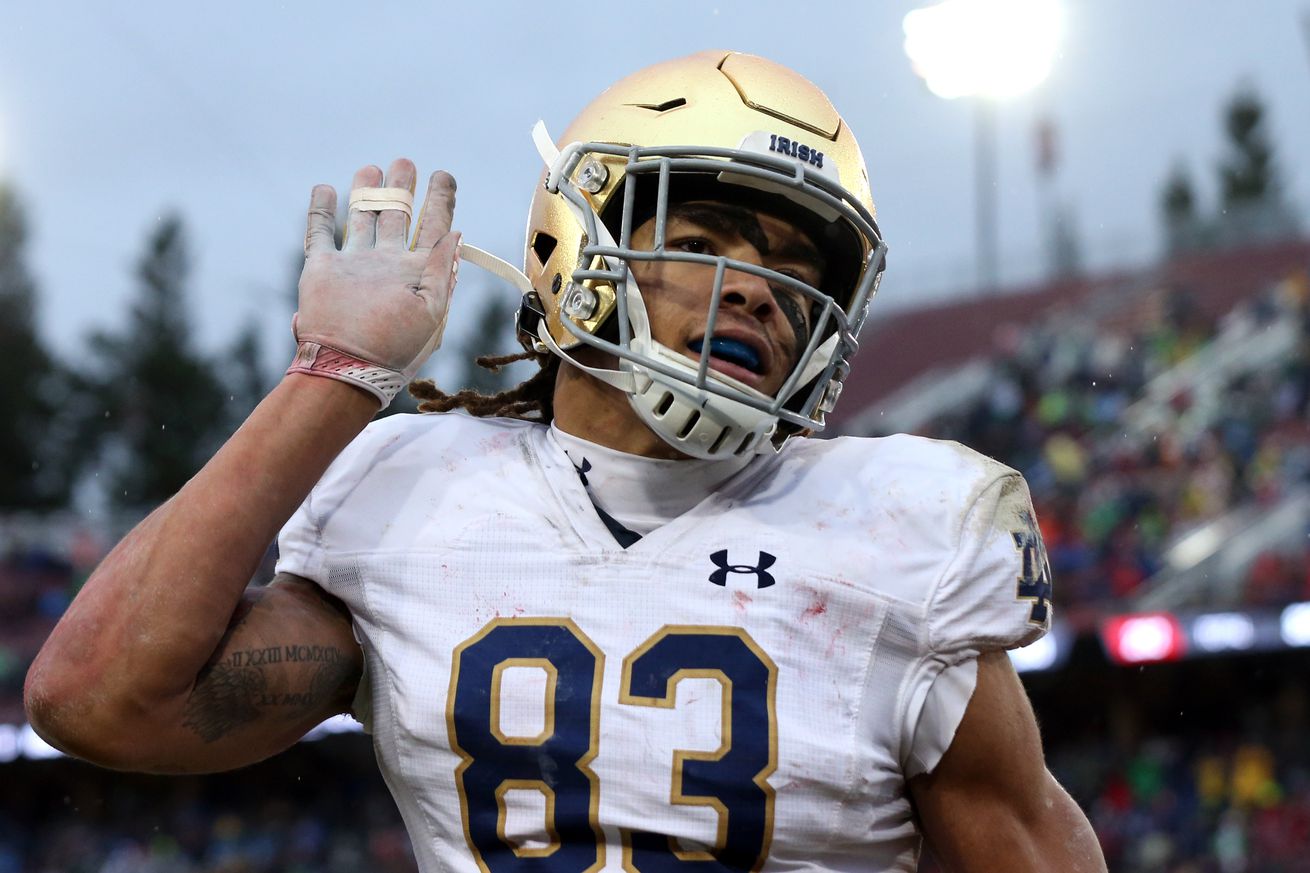 Transitioning to 2020 content, we looked at the EPA/play and Success Rates (when the sample size was large enough) with the skill players for the Notre Dame Fighting Irish. We’ll focus first on what the Irish need to replace in Chase Claypool, Tony Jones, Chris Finke, and Cole Kmet, and then the returning playmakers that are going to have to step up to replace them. Please follow this link to an article with a primer on the statistics that will be used in this article.

This is a chart I posted a couple months ago on Twitter, showing a player’s EPA/Play and the amount of touches they received in the 2019 season. It’s easy to see here the lack of production Notre Dame received from the running back position, with Ian Book being the most efficient runner with a significant amount of carries. The production from Claypool and Kmet also sticks out here, both being very efficient receivers and leaving a large amount of receptions Tommy Rees and Book will have to replace.

Claypool was a second round pick by the Pittsburgh Steelers in April’s NFL Draft, and these charts provide a good look as to why. His receptions went for more EPA than the FBS average in twelve out of thirteen games and ranking 19th out of 97 receivers with at least 50 catches. In addition to this spectacular efficiency, he led the team with sixty-six receptions, hauling in over a quarter of Ian Book’s completed passes in 2019. Claypool was invaluable in the red zone as well, catching thirteen of Book’s thirty-four touchdown passes. Chase Claypool was an NFL receiver playing at the college level last year, and the Irish will need Braden Lenzy, Northwestern transfer Bennett Skowronek or Kevin Austin, when he is back from injury, to help fill the void left by Claypool.

It was a mixed bag for Tony Jones in 2019, because while he struggled to post even average statistics on a consistent basis, he did consistently outperform Jafar Armstrong and Jahmir Smith. Jones was an effective pass blocker and was dangerous in the pass game against Georgia and other teams, but he was simply miscast last season as the team’s bell cow back. He lacked the quickness and athleticism to handle a Josh Adams type role, but in fairness to him had that role thrust upon him after the early injuries and late struggles of Armstrong. While these stats would indicate the Irish are not losing a ton in the often average Jones, there are no returning players that even touched the workload and efficiency Jones offered which is potentially a major concern. However, with Armstrong now buried on the depth chart it appears that two highly touted but unknown commodities in Kyren Williams and Chris Tyree will be carrying the load for the Irish this season.

Finke is at a bit of a disadvantage generating EPA/play compared to Claypool since he often ran shorter safety valve routes from the slot that, while efficient, were not going to generate as much EPA. And since these charts do not punish receivers for uncaught targets (which is something we are working on adding for the 2020 season) he does not get any credit for his high catch rate. While Finke was not a game changing receiver he was a trusted target for Book over the middle that excelled running the types of drags and slants that Book loved to throw. Finke was one of three Irish pass catchers to eclipse forty receptions, especially significant considering that Javon McKinley was fourth with eleven. Finke won’t be playing on Sundays, but he will definitely be missed on Saturdays in South Bend.

Cole Kmet was spectacular after his return from injury, torching Georgia and Virginia from all over the field. However, these stats don’t tell the whole story. He may have had a 100% success rate against Michigan, but it was on just two catches. Against Virginia Tech, Kmet only caught two passes as well. While he was almost as efficient as Claypool, the Irish struggled to get the ball into Kmet’s hands consistently over the second half. It will be extremely interesting to see who steps up to fill Kmet’s shoes, as he was used as a blocker and as a receiver all over the field. Watch for Tommy Tremble and Brock Wright, but don’t sleep on the ultra athletic George Takacs and 5-star freshman Michael Mayer to be involved as well.

Pivoting to returning players, the Irish need far more and far better from Jafar Armstrong than they got last season. Armstrong was primed to be a major weapon in the Irish offense, but an early hamstring injury slowed Armstrong’s progress. After his return against USC, he only had two games above the NCAA average in EPA/rush. He also had fumbling problems throughout the year. And it looks like, as mentioned earlier, that Brian Kelly and Tommy Rees are looking elsewhere to replace the carries left by Tony Jones.

Lenzy wasn’t consistently involved in the offense, dealing with injury issues and often being inserted to run sweeps and then substituted back out of the game. He did have some electrifying long runs, including an incredible sprint against USC that showcased his speed and is not included in his receiving stats here. The Irish were absolutely abysmal throwing behind the line of scrimmage last year, and I believe this is an area where Lenzy seems primed to contribute more. He has the speed to take screen passes the distance and an athleticism not possessed by any returning Irish receiver, save for maybe Kevin Austin. The coaches need to find a way to get the speedster into space, and I am confident they can figure it out, although he is currently listed as Javon McKinley’s backup.

Tommy Tremble flashed an ability to run vertical routes, hauling in a long touchdown against Louisville and consistently hauling in valuable receptions down the field, showcasing his athleticism in the process. He was entrusted in this area far more than Brock Wright, and I’d imagine this will continue in 2020 with Wright mostly working as a fullback and run blocker with Tremble being given more route running responsibilities. It will be extremely interesting to see if Tremble lines up all over the field the way Kmet did, or if he is just in a similar but expanded role as last year.

Like Lenzy, Lawrence Keys was not involved much in the offense with only thirteen receptions on the year. While he was very good against New Mexico and Navy, he only caught two passes in each game where the average margin of victory was 42 points. Penciled in as one of the starting receivers, Keys is one of the bigger question marks in 2020 and it will be interesting to see how much run he gets considering many believe Tommy Rees will utilize two Tight End sets more heavily than his predecessor Chip Long. But it’s not promising for him that he is currently listed as the backup to Avery Davis.